The news cycle has been — and will be this next week — dominated by Trump SCOTUS nominee Federal Judge Brett Kavanaugh’s hearings including testimony accusing the nominee of sexual assault from Dr. Christine Blassey Ford. One important point that could well have been missed was an action taken by the American Bar Association to downgrade Kavanaugh’s judicial rating following concerns about ““his professional experience and the question of his freedom from bias and open-mindedness.” Questions were raised about his “ability to be balanced and fair”, one interviewee described him as “immovable and very stubborn and frustrating to deal with”: The American Bar Association Had Concerns About Kavanaugh 12 Years Ago. Republicans Dismissed Those, Too.

One lawyer said Kavanaugh “dissembled” in the courtroom. He has dissembled endlessly during his hearings, but these concerns were of no interest to Republicans, especially Sen. Lindsay Graham who referred to the ABA as the “gold standard”. Which brings ‘fool’s gold’ to mind following performances by both Graham and Kavanaugh while ‘overlooking’ the concerns; the singlular goal to be to seat Kavanaugh regardless.

A second news item that may have passed under the radar: Under the Fog of Kavanaugh, House Passes $3.8 Trillion More in Tax Cuts.

This attempt at a second Trump tax cut follows the 2017 tax cut benefiting corporations and the wealthy and adding to a record breaking U.S. deficit.  Republicans are already hand-wringing over their presumption of the need to cut Social Security and Medicare to make up for the first tax cut let alone a second: Blowing Up the Deficit Is Part of the Plan.

A second tax cut has to pass the Senate but the Republicans have already shown their hand. Who could possibly have seen this coming? Imagine Republicans stoking fear by claiming Democrats will come for ‘your guns and Social Security’ while quietly engineering their planned demise of our hard-earned social safety net.

It’s like the arsonist pointing the finger at the fire fighters after cutting their budget. What of the people that lived in the house? Likely they were living in the wrong neighborhood – one of their “poor” choices in life.

Everyone of those that voted for yet another tax cut might as well be wearing a copy of Melania’s cynical ‘I really don’t care, Do U?’ jacket.

As always with far too many of our political leaders, they lie when the truth is inconvenient to their aims. Let’s consider this in relationship to Trump-Russia. The story, Skripal Poisoning Suspect Alleged To Be A Colonel In Russia’s GRU, is tucked behind a pay wall at the Financial Times This article is behind the pay-wall but it’s an easy story to summarize:

One of the suspects in the poisoning of former Russian spy Sergei Skripal in Salisbury is a colonel in Moscow’s military intelligence, according to documents uncovered by two online news organisations.

“The revelation, which has not been disputed by British intelligence, casts fresh doubt on the Kremlin’s claims that the men were innocent tourists framed as part of a UK conspiracy against Russia.

“Earlier this month British police took the unusual step of releasing CCTV footage of two men whom they named as RuslanBoshirov and Alexander Petrov. Officers said the Russians had travelled to the UK using aliases to carry out the poisoning of MrSkripal using the nerve agent novichok.”

The two Russians suspected of the attack on the Skripals were caught on CCTV though Russian state TV RT explained they were innocent, “they were sports nutritionists who had travelled to Salisbury to see the city’s cathedral and other tourist sites”.

The Financial Times reports in their story that, “RuslanBoshirov received an honour from Putin in 2014”.

“There has been an increase in rhetoric — under the guise of ‘highly likely’ — in connection to the Salisbury case,” he said. “At the same time, the United Kingdom stubbornly shies away from the joint investigation that we repeatedly proposed, although this is what it is obliged to do.”

Dissembling? Claims and arguments about investigations as political cover to avoid the truth while denying and plowing forward to a desired political end? Really, Sergei…

Here is one of the latest examples of Russpublican attempts to cover and normalize Trump’s fascination with Putin and all things Russian: Rand Paul’s Push to Lift Some Russia Sanctions Fizzles.

You know you’re outside the Russpublican envelope when your peers turn their backs on you while offering criticism. The key here:

“Sen. Rand Paul’s (R-KY) push to lift U.S. sanctions on Russian lawmakers failed on Wednesday, with his colleagues on the Senate Foreign Relations Committee questioning the motives behind the proposal.”

It was Sen. Bob Corker’s (R-TN) turn as a ‘reasonable’ Republican and took advantage to denounce Paul’s initiative, “it was soundly defeated for obvious reasons”.

Sen. Jeanne Shaheen (D-NH) offered a view that got right to the point referring to Paul’s initiative as, “a capitulation to Putin’s aggression”.

No dissembling by Shaheen. The Senate Foreign Relations Committee defeated the proposal with 20 Senators voting against and only Paul voting in favor.

The master of chaos

Make no mistake, Trump is committed to chaos. Like Putin himself, Trump is the master of chaos and dissembling:

Presidential Peril: What Happened When Trump Made Landfall At The UN.

Last edition we noted the circus Trump orchestrated over the potential firing of Deputy Attorney General Rod Rosenstein as political cover to distract from the flagging public view of SCOTUS nominee Kavanaugh.

Trump may miscalculate along the way, but chaos is a deliberate strategy to distract while pushing ahead his desired agenda. While much of the focus over Trump’s recent UN General Assembly speech was about his being laughed at, there we two more important points.

We have acknowledged the first, “he dropped an additional bombshell, claiming China was planning to subvert the upcoming congressional elections in November. He provided no proof or details, simply moving on to another subject.” We’ve seen no proof, it’s unlikely we’ll ever see proof as we struggle to digest the next Trump fiasco. But keep in mind, Trump keeps his eye on the prize; consider this view of the events following Trump’s accusation:

“Then it was the turn of Trump’s counterparts to speak. The Chinese foreign minister, Wang Yi, vigorously rejected Trump’s accusation. None of the other 13 leaders even mentioned it. And none supported Trump’s abrogation of the Iran nuclear deal. Almost all vigorously defended it. One, Evo Morales of Bolivia, used his time at the microphone to deliver a blistering attack on the Trump administration and its policies, with a blunt severity that Trump has not encountered since taking office.

“”The United States could not care less about human rights or justice,” the former union boss said. “I would like to say to you, frankly and openly here, that in no way is the United States interested in upholding democracy.”

“The notoriously thin-skinned Trump look across the table at Morales impassively, leading some in the observation booths to speculate the translation audio feed to his ear-piece had been cut off to avert an international incident.

“A diplomat who was sitting behind the president insisted that was not the case. The president had heard the harangue in full, but had maintained a disciplined cool.

““He had decided what the headline was going to be, about China. If he had got into a row, that would have been news,” the diplomat said. “By staying quiet, he won.””

Someone has to sweep up after the elephants. Like the elephant in the parade, he relegates everyone else to the role of sweepers. Trump keeps his eye on the prize. 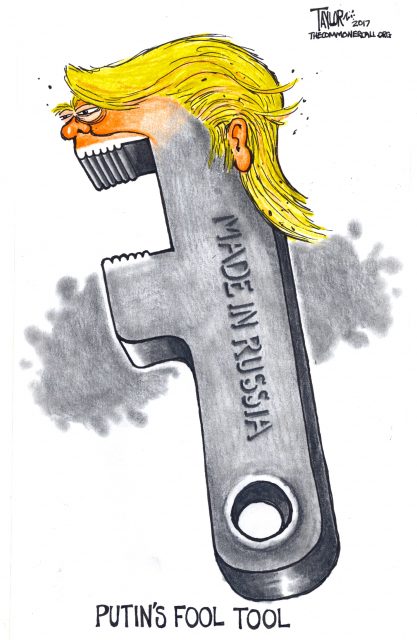 And therein is the point. Trump leads the way with chaos, anger and dissembling and coaches his cult, sycophants and Russpublican protectors to follow his model.

Is it working? Is Trump an evil genius; is this all his design?

Putin’s Payout: Trump is eagerly pushing for an all-out trade war with Europe.

Consider Trump’s remarks before the UN General Assembly; there are a number of entries that could be highlighted, here’s one:

Putin’s Goal: Build global resentment and distrust towards the US and stoke anti-American sentiment.

Putin’s Payout: America’s closest allies are explicitly suspicious and distrusting of the US because of Trump’s rhetoric and actions.

Sen. Paul was out over his skis, but consider this entry on the list.

And we’ll close with one more. Many have questioned why Trump nominated Kavanaugh given the expected battle over his nomination and a list of equally or better qualified alternative candidates. It fits with Trump’s preference to take the fight directly to the enemy and if chaos ensues, all the better. If Kavanaugh’s nomination fails, Trump will lose no sleep and will put forward another candidate, possibly even more conservative, but without the baggage. Consider this:

Putin’s Goal: Destabilize the US from within.

Trump has his eyes on the prize and relishes chaos as a strategy. He is burning down the house while blaming the firemen and paying back his debt to Putin.

And what are we?