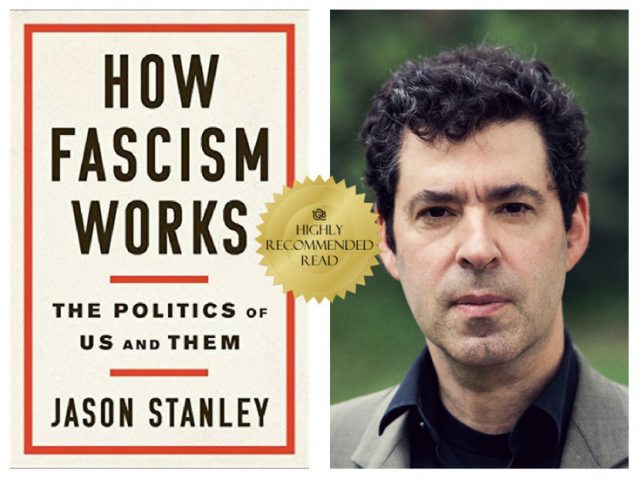 “There is no question we are witnessing its successes here.”

A country does not have to be fascist or have a fascist government in order to be riddled with fascist politics. This is the scary premise Jason Stanley argues in his recent book How Fascism Works: The Politics of Us and Them. Stanley, professor of philosophy at Yale University, is Jeff Schechtman’s guest on this week’s WhoWhatWhy podcast.

Stanley reminds us that while 63 million Americans voted for President Donald Trump, a man who taps into America’s worst impulses, historically there is nothing new about the kind of politics he exploits. The attacks on immigrants, the media, cities, elites, and minorities, and the promise to weed out corruption, are all straight out of the fascist playbook.

Stanley talks to Schechtman about what he believes are the ten pillars of fascist politics: the mythic past, propaganda, anti-intellectualism, unreality, hierarchy, victimhood, law and order, sexual anxiety, and appeals to the heartland. He explains how fascists have consistently used these elements to sow division and gain power.

We are reminded in this conversation that the US is just as susceptible to fascist politics as Europe or anywhere else. Fascism, Stanley explains, is rooted in the struggle for “the national state” — a struggle fueled by a sense of loss for an idyllic past, which all but demands scapegoating of those “responsible” for that loss. It’s about, as Stanley puts it, weaponizing nostalgia.

The great joke on democracy

Another key to fascism, as detailed by Stanley, is that it almost always wins by means of democratic elections. He points out that Nazi propaganda minister Joseph Goebbels observed that the great joke on democracy is that its very freedoms lead to the victory of its worst enemy.

As Stanley speculates on the future, his greatest fear is that the US is evolving into a one-party state through a perversion of democracy. He singles out candidates like Brian Kemp in Georgia and Kris Kobach in Kansas, who are stoking fear of “others” to create an anti-democratic backlash — and who are masters of voter suppression of non-white voters. He then explains the path that runs from voter suppression to the public’s feeling of hopelessness for democracy, and eventually to the collapse of democracy itself.

Stanley’s is a cautionary tale, taken straight from today’s headlines.

Link to Story and 24-Minute Audio and Transcript