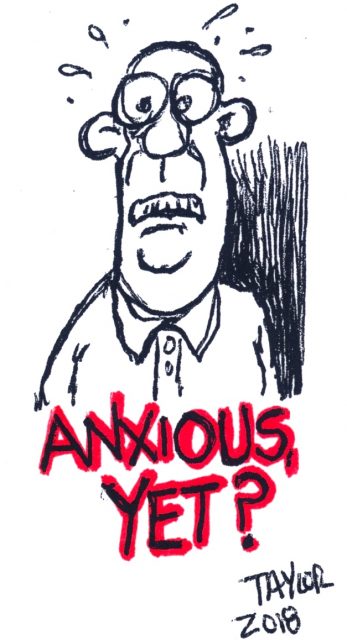 That’s the conclusion of a report released Monday by the EPA’s Office of Inspector General (OIG), the agency’s internal watchdog.

The report assessed the EPA’s compliance with the Asbestos Hazard Emergency Response Act (AHERA) of 1986, an amendment to the Toxic Substances Control Act (TSCA) that requires local education agencies to inspect schools for asbestos, make asbestos management plans and carry out actions to reduce or prevent asbestos exposure.

Between 2011 and 2015, the EPA conducted only 13 percent of inspections required under AHERA, while states in charge of their own inspections conducted 87 percent.

The report further found that only one EPA region had a strategy for monitoring compliance under TSCA, and five of 10 regions only inspected for asbestos when there was a complaint.

“Without compliance inspections, the EPA cannot know whether schools pose an actual risk of asbestos exposure to students and personnel,” the report said.

The OIG recommended that the EPA mandate that regions incorporate asbestos monitoring into TSCA monitoring plans generally and tell local education agencies that they must work with regional offices to establish asbestos management plans that are maintained and to make sure the plans are being followed.

Trump’s EPA blamed the Obama administration for the lax enforcement, and it is true that the period highlighted by the study coincides with the Obama presidency.

“The previous administration did not do enough to provide adequate protections to children from asbestos exposure. The Trump administration is taking proactive steps to reduce asbestos exposure, which includes a new proposed regulation that, for the first time, would prohibit the currently unregulated former uses of asbestos,” EPA spokesman Michael Abboud said in a statement reported by The Hill.

The proposed regulation in question, the Significant New Use Rule (SNUR) for asbestos, would require manufacturers to gain EPA approval before starting importing, manufacturing or processing of asbestos.

But public health advocates, and some EPA staffers, have expressed concerns that the SNUR could actually be used to expand the use of asbestos in the U.S. by allowing companies to petition for uses on a case-by-case basis.

Trump’s EPA has also been criticized for saying it will not consider the health risk posed by asbestos already in the environment when it evaluates it as one of the first 10 chemicals it will study for a potential ban under a 2016 amendment to TSCA.

President Donald Trump has famously praised asbestos, and his image was stamped by a Russian asbestos company on plastic wrap containing their product. [Below.] 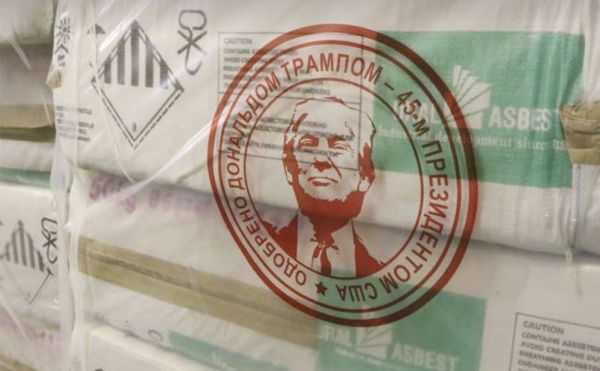 Significant amounts of asbestos were used in American schools from 1946 to 1972, the OIG report said.

It was commonly used as insulation and flame retardant, and can be found in older schools in vinyl flooring, textured paint and patching on walls and steam and water pipes.

Asbestos is a carcinogen that causes as many as 15,000 deaths a year in the U.S., according to an Environmental Working Group (EWG) study.

Children and teachers in schools can be exposed when asbestos is disturbed by construction or remodeling, the OIG said.

“Asbestos exposure risk is higher in children because they are more active, breathe at higher rates and through the mouth, and spend more time closer to the floor where asbestos fibers can accumulate,” the report said.