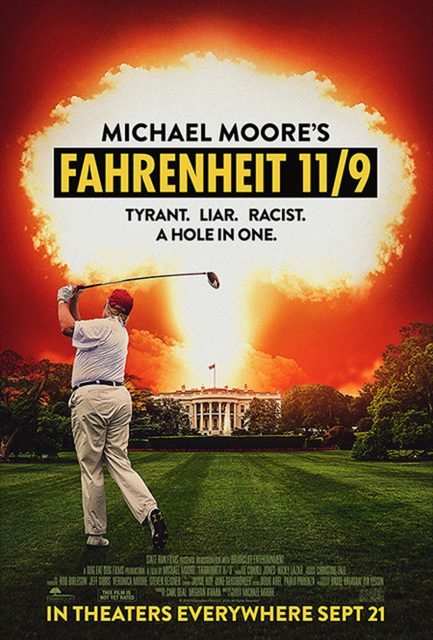 By Gregg Kilday
The Hollywood Reporter (9/5/18)

The first time Michael Moore encountered Donald Trump, the filmmaker uncharacteristically held his tongue. The two had been booked as guests in 1998 on Roseanne Barr’s afternoon talk show, The Roseanne Show, taping at New York’s Tavern on the Green. Trump’s The Art of the Deal had been published in 1987 while Moore had already earned a reputation as a cheeky provocateur out to puncture capitalism’s balloon with his 1989 doc Roger & Me, and so when Trump spotted Moore, he threatened to walk. One of the show’s producers pulled Moore aside: Could he convince the skittish real estate developer to stay? Agreeing to help, Moore introduced himself to Trump and promised he’d keep the chatter light. “We did the show. I did not bring up anything political, financial, anything that would have upset him,” Moore recalls, settling into a chair in the conference room of his Manhattan production offices on a recent late-August night. “It wasn’t until I saw him running for president that I realized I’d been played. That he got his way. And I thought, ‘Wow, he manipulated that whole situation. This guy is not stupid.’ Lesson learned.”

The fascists of the 21st century will convince the people to go against their own interests by using television and branding. I don’t think we should be afraid to call this out for what it is.

This time out, as Moore, 64, readies his newest documentary, Fahrenheit 11/9, which will kick off the Toronto International Film Festival on Sept. 6, he’s not holding back. “Trump is our Frankenstein and we are Dr. Frankenstein,” he declares. “We have helped to create a situation that has allowed us to end up with Trump. The dumbing down of our society through the media, the lack of education through poor schools, allows for a dumbed-down electorate, and for him to be able to actually get 63 million votes.” In the opening moments of his new film, as the comedy curdles into horror, Moore asks bluntly, “How the fuck did this happen?”

The movie comes at a key moment for both Moore and the republic. His 2004 anti-Bush diatribe, Fahrenheit 9/11, remains the top-grossing documentary of all time domestically (with $222.4 million worldwide), but his last major film, 2016’s Where to Invade Next, got only a perfunctory release. He’s looking to ride the current boom in documentary film and a crescendo of anti-Trump fervor to turn his new movie into a come-to-Jesus moment for depressed progressives and a rallying cry for insurgent politicians lining up for the midterms. Moore’s not prepared to say a Democratic takeback of the House, let alone the Senate, is a fait accompli, but he predicts, “There’s going to be a tsunami of voters — especially women, young people and people of color. If there are candidates worth voting for, there will be a shellacking the likes of which the Republicans have never seen.”

As for 2020, Moore adds, “As things stand right now, everybody should operate as if it’s a two-term Trump,” but if the Dems are to unseat him, “we need beloved figures running. Say what you want about Trump, but tens of millions watched his show. We need Tom Hanks, Oprah, Michelle Obama. Who would not vote for Michelle Obama?”

Fahrenheit 11/9 — its title reworks that of his biggest hit by referencing the actual date when the 2016 election was called, in the early morning hours — may start with Trump, but it then ranges across a larger panorama …

Read the Rest and Short Videos

Michael Moore Gives Us A Reality Check: “Right now, hope is the most dangerous thing we can have.”