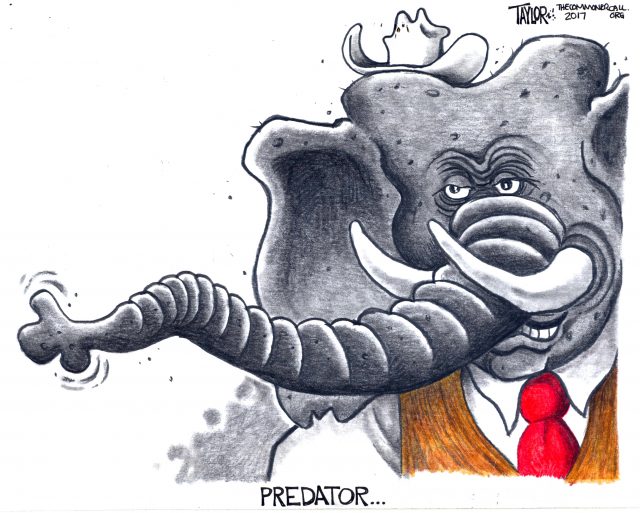 For the second time during Donald Trump’s presidency, a sex scandal involving a Republican judge is causing heartaches for the GOP.

In the fall of 2017, former Judge Roy Moore’s campaign for the United States Senate seat vacated by Jeff Sessions was rocked by allegations of sexually assaulting women and girls. The Washington Post won a Pulitzer Prize for their reporting and Democrat Doug Jones won the December special election.

Now, Judge Brett Kavanaugh is facing allegations of attempting to rape Dr. Christine Ford when was an underage high school girl. The allegations against Judge Kavanaugh are threatening to derail his nomination to the United States Supreme Court.

On MSNBC’s “Deadline: White House” on Tuesday, host Nicolle Wallace noted, “whichever way this goes, the optics of Republicans rallying around someone now accused of sexual assault is perilous in and of itself.”

“And it is somewhat reminiscent of the Roy Moore case, where you had Republicans rallying around Roy Moore and the alleged pedophilia cases that he was involved in,” Steele noted. …

Read the Rest and 9+-Minute Video

While the nominee has a history of dishonesty and obfuscation, Ford has proven a very reluctant—yet so far compelling—witness to the events that took place more than three decades ago.

Amid calls for Brett Kavanaugh to withdraw his nomination to the Supreme Court after he was publicly accused of sexual assault and attempted rape by college professor Christine Blasey Ford on Sunday, the credibility of both the accused and the accuser was the center of U.S. politics on Monday just days before a scheduled vote by the Senate Judiciary Committee on Thursday.

And while many are calling for a thorough investigation into the matter, even a cursory look at the record—including damning evidence that Kavanaugh has already committed perjury before congressional lawmakers—reveals the nominee has a history of dishonesty and obfuscation whereas Ford has proven a very reluctant, yet so far compelling, witness to the events that took place more than three decades ago. …

This nation is suffering a significant breakdown of civility, bipartisanship and ethical behavior. For the Trump administration and the Republican leaders who enable it, truth is no longer a cherished value. To them, lying seems to be part of the strategy, a cynical weapon to be used against their opponents.

This week, we are witnessing the full depth of that cynicism, as the White House and its supporters smear a woman who makes credible, significant accusations of sexual assault against Supreme Court nominee Brett Kavanaugh. At the same time, another fact has become clear: Kavanaugh himself has a casual relationship with the truth ― and in that, he fits right in with the way President Donald Trump and his party behave.

As an illegitimate administration goes to work attacking the credibility of a brave woman recounting her assault, let’s recognize the enormously cynical hypocrisy: The nominee they’re desperate to protect is a calculated liar who uses dishonesty to advance his own career.

At the White House event announcing Kavanaugh’s nomination, the appellate judge offered a remark that seemed odd. Praising Trump, he said, “No president has ever consulted more widely, or talked with more people from more backgrounds, to seek input about a Supreme Court nomination.”

I personally found this hard to believe. How would Kavanaugh know that? Why would he be so sure and definitive about it? I did what we all do these days with the overwhelming list of lies coming out of this White House — I figured that Republicans were all “in on it,” that this comment would stand as just another obviously false spin in the process of getting another illegitimate seat on the Supreme Court for a conservative judge. But it turns out this was only a glimpse into the nominee’s disturbing willingness to avoid the truth. …

Call Wisconsin’s Senators And Tell Them To Reject Kavanaough For A Life-time Appointment To The Supreme Court!