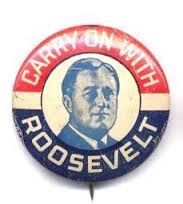 The 32nd president of the United States, the one that brought us Social Security and The New Deal, Franklin Delano Roosevelt, wanted us to criticize corporate Democrats from the very beginning. I’m not kidding.

After FDR replaced him with former Secretary of Agriculture, Henry Wallace, Garner and other southern conservative Democrats tried to block FDR from nomination.

In response, he wrote a letter directed to the Democratic Convention, saying that he wouldn’t run for his third term if Democrats blocked Wallace. This letter was never sent because a speech by Eleanor Roosevelt at the convention turned the tide. It was basically unpublished and unknown, until Oliver Stone featured the letter in his Showtime series, Untold History of the United States.

Here is the letter…

For more background and context on FDR’s letter and his showdown with Wall Street democrats check out: FDR Reminds Us To Criticize Corporate Democrats.