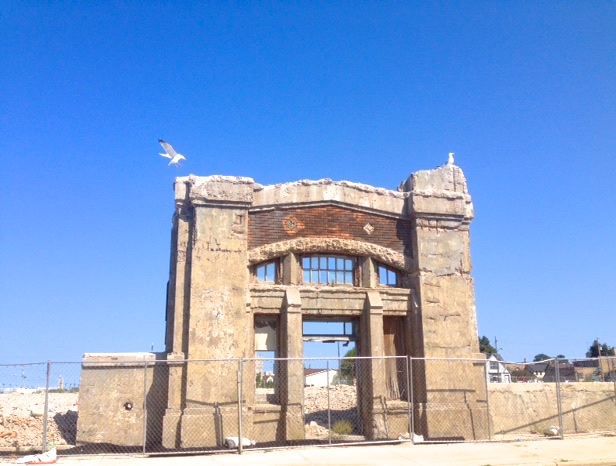 All that remains of the Mirro Aluminum Company manufacturing plant in Manitowoc, Wisconsin is the front entrance. Beyond is a city block or more of broken foundations and shattered concrete slabs. When my family moved to Manitowoc in 1970 Mirro was a major employer. Whole families and generations of skilled trades workers, assembly line workers and laborers spent their entire careers at Mirro, which was founded in 1909 and shuttered and business shipped off to Mexico in 2003, as the realities of NAFTA caught up with the loyal workers. I grabbed this photo in mid-July of this year. — Mark L. Taylor

The official rate of unemployment in America has plunged to a remarkably low 3.8%. The Federal Reserve forecasts that the unemployment rate will reach 3.5% by the end of the year.

But the official rate hides more troubling realities: legions of college grads overqualified for their jobs, a growing number of contract workers with no job security, and an army of part-time workers desperate for full-time jobs. Almost 80% of Americans say they live from paycheck to paycheck, many not knowing how big their next one will be.

Blanketing all of this are stagnant wages and vanishing job benefits. The typical American worker now earns around $44,500 a year, not much more than what the typical worker earned in 40 years ago, adjusted for inflation. Although the US economy continues to grow, most of the gains have been going to a relatively few top executives of large companies, financiers, and inventors and owners of digital devices.

It is no coincidence that all three branches of the federal government, as well as most state governments, have become more “business-friendly” and less “worker-friendly” than at any time since the 1920s.

When Republicans delivered their $1.5tn tax cut last December they predicted a big wage boost for American workers. Forget it. Wages actually dropped in the second quarter of this year.

Not even the current low rate of unemployment is forcing employers to raise wages. Contrast this with the late 1990s, the last time unemployment dipped close to where it is today, when the portion of national income going into wages was 3% points higher than it is today.

What’s going on? Simply put, the vast majority of American workers have lost just about all their bargaining power. The erosion of that bargaining power is one of the biggest economic stories of the past four decades, yet it’s less about supply and demand than about institutions and politics.

Two fundamental forces have changed the structure of the US economy, directly altering the balance of power between business and labor. The first is the increasing difficulty for workers of joining together in trade unions. The second is the growing ease by which corporations can join together in oligopolies or to form monopolies. …

Time To Fight Back! This Labor Day, Gear Up To Stop The Escalating Trump & GOP War On Workers & Social Security

Labor Day is traditionally a time to honor workers and their invaluable contributions. But this year, it’s also a time to recognize the fact that American workers are under attack from the Trump administration, Republicans in Congress, and the billionaire donor class that owns these politicians. This Labor Day is an opportunity to join together and make plans to fight back.

The attack is not new, but it is escalating. Government policies, including deregulating Wall Street, cutting taxes on the rich, privatizing prisons and other government functions, busting unions, and suppressing wages by refusing to raise the minimum wage to a living wage, have had their destructive impact. In the last four decades, America’s income growth has gone overwhelmingly to the wealthiest 1 percent. 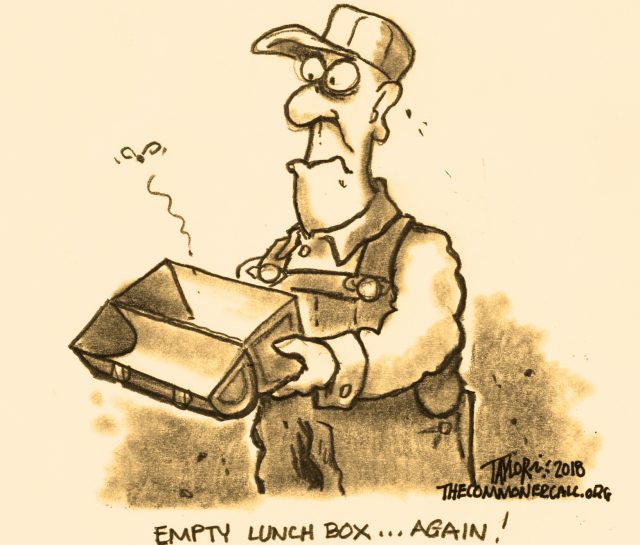 The donor class will fight to protect its unearned riches, using much of the wealth from the rigged system they created to steal wages from the rest of us. But there are more of us.

It hasn’t always been this way: From 1950 to 1973, wages rose along with productivity. Since 1973, the productivity of American workers has continued to steadily increase. But those at the top have pocketed the wealth created by that productivity while workers’ wages have stagnated or declined.

This upward redistribution of wealth has created staggering levels of income and wealth inequality. Yet Trump and the GOP elite are working hard to produce even more: Last year, the GOP passed a massive tax giveaway to their billionaire donors. And Republicans have made it crystal clear that they plan to use the enormous cost of that tax handout as an excuse to demand cuts to our Social Security, as well as to Medicare and Medicaid.

This despite the fact that Social Security is an earned benefit that does not add a single penny to the deficit. That includes Social Security disability benefits, the place where Trump’s budget reveals that he plans to start his Social Security cuts. (His most recent budget proposed cutting Medicare, Medicaid, and Social Security by $1.8 trillion over just the next 10 years.)

The desire to undermine our economic security doesn’t end there. The Trump administration has stepped up its attacks on a specific group of workers—the civil servants who run the Social Security Administration (SSA) and other government agencies. SSA has already suffered nearly a decade of budget cuts from congressional Republicans, forcing office closures, staff reduction, and a years-long wait for disability hearings.

Now Trump has issued four Executive Orders that severely weaken civil service protections, the power of federal unions to protect their members, and the independence of the judges who preside over Social Security hearings. (The orders going after civil service workers’ protections and their union representatives have been blocked by a federal district court, but the Trump administration appears to be ignoring the court’s ruling.)

Attacks on SSA don’t just hurt the agency and its workers. They hurt all Americans by making it increasingly difficult to collect the Social Security benefits we earn with every paycheck.

This is the exact opposite of what the American people voted for. Trump ran on a promise to protect Social Security, Medicare, and Medicaid. This was a shrewd political strategy, given that voters of all political stripes are strongly opposed to cutting Social Security benefits. But as with his promise to raise taxes on the rich and his promise to provide quality affordable health care for everyone, Trump has done the exact opposite now that he’s in the White House.

Trump and congressional Republicans are waging a war on workers. This November, when every member of the House and one-third of the Senate are up for reelection, all of us together will have the opportunity to fight back at the voting booth.

The midterms will also be an opportunity to elect political leaders who run on a bold pro-worker platform: Expanded Social Security, a $15 minimum wage, an improved Medicare for All, paid family leave, improved worker health and safety protection, and more. We’ve already seen candidates across the country win Democratic primaries by running on a workers’ rights agenda. Now it’s time to send them to Congress.

This Labor Day comes at a difficult time for American workers, but we should take heart in remembering our nation’s history. The Great Depression was the darkest time of all for American workers, and it led to unprecedented solidarity and demand for change. Workers elected President Franklin D. Roosevelt and successfully fought for the passage of the New Deal, including Social Security, the minimum wage, and the right to fight back through collective bargaining. Now is the time for another massive workers’ movement to demand an updated New Deal, with expanded Social Security, improved Medicare for All, an increased minimum wage, and a more even field on which to bargain.

The donor class will fight to protect its unearned riches, using much of the wealth from the rigged system they created to steal wages from the rest of us. But there are more of us. They are trying to rig elections through suppressing votes and gerrymandering districts. But we can’t let them succeed. Those of us who value Social Security and the other elements of the pro-worker agenda must vote. We can and must win at the ballot box to make future Labor Days fairer and more equal for all of us.

This article was produced by the Independent Media Institute.

The GOP War On American Workers

American workers deserve honor and respect, on Labor Day and every other day of the year. Unfortunately, despite the populist rhetoric, that’s not what we’ve been getting from Donald Trump and the Republican Party. Instead of promoting policies that help America’s working families, the GOP has spent the year waging war on working Americans.

Due to a massive uprising from grassroots activists, the GOP plan to take health care away from over 20 million Americans was defeated. But the next priority on their agenda is just as bad: Pass massive tax cuts for the wealthiest Americans and giant corporations, paid for by starving vital services and benefits. …