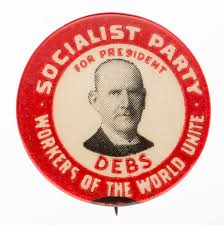 “The capitalist who does no useful work has the economic power to take from a thousand or ten thousand working men all they produce, over and above what is required to keep them in working and producing order, and he becomes a millionaire, perhaps a multi-millionaire. He lives in a palace in which there is music and singing and dancing and the luxuries of all climes. He sails the high seas in his private yacht. He is the reputed “captain of industry” who privately owns a social utility, has great economic power, and commands the political power of the nation to protect his economic interests. He is the gentleman who furnishes the “political boss” and his swarm of mercenaries with the funds with which the politics of the nation are corrupted and debauched. He is the economic master and the political ruler and you workingmen are almost as completely at his mercy as if you were his property under the law.”