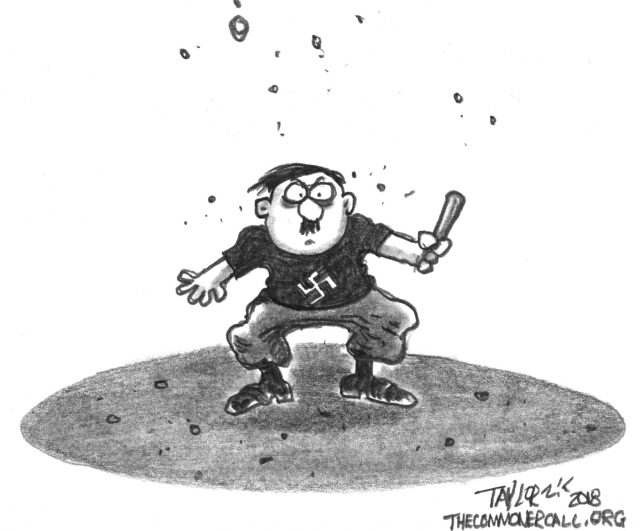 David Duke first rose to prominence in the ‘70s and ‘80s as a modern, more photogenic representative of the white supremacist movement, abandoning the Ku Klux Klan’s robe and hood in favor of business suits and trading overt racist appeals in exchange for more “acceptable” coded language that involved disparaging “welfare queens” and “racial set-asides.”

Duke eventually left the Klan to found the “National Association for the Advancement of White People,” served one term as a Republican in the Louisiana state house, published two books, one on “Racial Understanding” and the other on “Jewish Supremacism,” ran for governor, senator and president, served a 15-month prison sentence for mail fraud and tax evasion, and today is a well-traveled international spokesman bringing attention to what he views as the Zionist conspiracy to run the world.

In this at times combative interview, an increasingly exasperated Cenk Uygur of The Young Turks listens as Duke goes on at great length attempting to substantiate his claims of a purported Jewish control of the media, the entertainment and banking industries and the US government – all while denying the label of anti-semite.

During the few breaks in his harangue, Duke briefly answers questions about:

– Whether he has any sympathy for African-Americans who, like him, claim to be victims of discrimination in the criminal justice system.

– Whether black people are more criminally inclined than white people or are simply targeted for arrest more frequently than whites.

– If MSNBC is run by a secret Irish-American cabal

– If he feels vindicated by the GOP’s adoption of policies he first pioneered, including the drug-testing of welfare recipients

– Whether all his railing against Zionism isn’t simply jealousy at the successes Jews have achieved while his and other white people’s fortunes have continued to dwindle.

Be sure to stay tuned all the way to the end!

Link to Story and 59-Minute Video

Former Klansman David Duke has made much of his academic credentials of late. On his website, he repeatedly refers to himself as “Dr.” David Duke, a reference to the supposed Ph.D. he “earned” in 2005 at an anti-Semitic Ukrainian institution described as a “diploma mill” by the State Department. Around the white supremacist world, excited accolades to Duke’s scholarship abound.

As the closest thing the radical right has to an intellectual today, Duke claims to uphold the high standards of academia. His website brims with criticisms of plagiarism — although they come, naturally, in the form of repeated attacks on civil rights leader Martin Luther King Jr., who is characterized as a “world-class plagiarist.” Plagiarism, Duke’s site adds piously, is “theft,” a rip-off that the site suggests amounts to “a serious felony.”

Which brings us to Duke’s last book.

When Duke published his self-proclaimed “world-wide Bestseller” Jewish Supremacism: My Awakening to the Jewish Question in 2002, he promised that the book’s “amazing documentary evidence” would challenge “your most cherished beliefs” about who is threatening the existence of “European-Americans.” Duke’s thesis was simple: Jews oppose all ethnic solidarity other than their own and “they consistently oppose all organizations seeking to preserve the interests and heritage of Europeans.” In a nutshell, Jews undermine the white race.

In an attempt to present the book as the product of sober academic research instead of rank anti-Semitism, Duke tells readers on the book’s promotional Web page that the tome derives its “real power” from referencing “major sources.” Duke encourages his readers to go to the materials he cites “and check them out for yourself.”

Good advice. But a careful consideration of Duke’s sources finds something interesting. It turns out that many of Duke’s citations of academic works are exactly the same, down to the placement of brackets, dates and periods, as those that appear in the works of Kevin MacDonald, an anti-Semitic professor of psychology at California State University, Long Beach (CSULB), who has long written dire tomes about how Jews threaten Western civilization.

Even Duke’s basic thesis — that Jews work as an unthinking cabal to undermine white power — is a restatement of MacDonald’s ideas. …