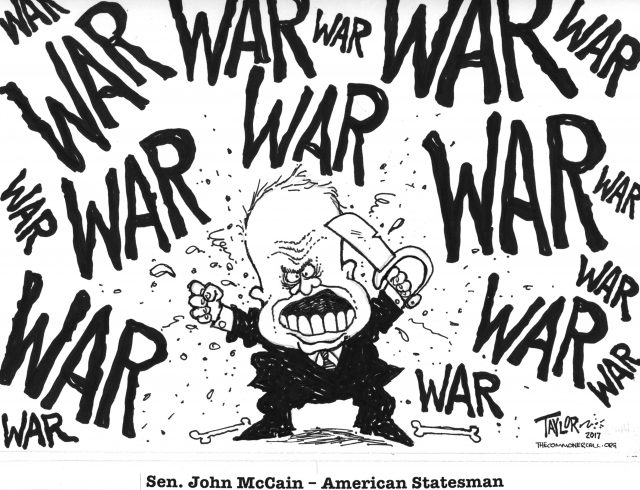 The Sunday news was filled with one somber tribute to Sen. John McCain after another. We were told of his great sense of humor and respect for colleagues on both sides of the aisle in the Senate. There were detailed stories of his horrific experience as a prisoner of war after his jet fighter was shot out of the skies over North Vietnam. Over and over he was described as the adult in the room and a respected “elder statesman” of the Senate. As a survivor of torture, he spoke out against the use of torture by U.S. military and intelligence forces. We heard much of his twinkle-in-the-eye scampish personality. And much of  what we heard was true.

I will admit to having had some occasional grudging respect for McCain. but that was mostly grounded in a hope someone at some point in time in the Republican party leadership would eventually display some shred of human decency.

All lives are filled with contradiction and hypocrisy and John McCain’s was no different. While many Sunday morning commentators described McCain as a champion of human rights his record of War Department overspending, support for allied thugs — like the bloody Saudi regime — and acts of war large and small cannot be ignored. A lot of people died and live on with lifelong disabilities because of the legislative record of John McCain.

The recently passed grotesquely bloated $717 billion war budget was named in “honor” of McCain. At a time when the two parties can’t agree if it is daytime, they can come together to pass carte blanche pork barrel budget giveaways to war contractors while millions of Americans go without health care. To have such a travesty named for you is not something to be proud of.

McCain was a huge champion of the unprovoked Cheney/Bush War against Iraq, which cost the lives of well over a million and tipped the Middle East into a whirlwind humanitarian crisis that has destabilized Europe. Every day innocents continue to die because of that historic miscalculation.

Much is said about McCain’s “maverick” status, yet with few exceptions — such as his dramatic thumbs down refusal to go along with a Republican effort to gut the Affordable Care Act — McCain was an ever reliable supporter of the Republican agenda of war, protection of the corrupt corporate state and punishment of the poor.

And let us not forget, it was John McCain, in a cynical bid to save his bumbling 2008 presidential campaign, who recklessly plucked Alaska Gov. Sarah Palin out of obscurity — and with no proper vetting — to take the Number Two position on the ticket, elevating one of the dumbest, most venal and dangerous politicians we have seen to the national stage. Her deification by the Tea Party played a direct role in greasing the radical right skids to a Trump presidency.

In fairness, he had taken some strong stands against the madness of Typhoon Trump, one of the precious few Republicans to show any spine on that ever matastizing disaster and the reason why many have a blinkered view of McCain’s record now.

Perhaps much of the breathless honoring of McCain has more to say about the collapsed nature of American leadership than about McCain; given the troll in the White House anything with any kind of positive tinge to it is seen as something great.

Many will say it is not proper to say bad things about the dead. Sorry, but when a public figure has a very mixed, complicated record of behavior that has directly caused the death and suffering of millions and destabilized whole swaths of the world sending millions more into refugee status and leading to ongoing anarchy and terror a fuller accounting of that legacy is in order.

(Commoner Call column and cartoon by Mark L. Taylor 2017. Open source and free for non-derivative use with link to www.thecommonercall.org )