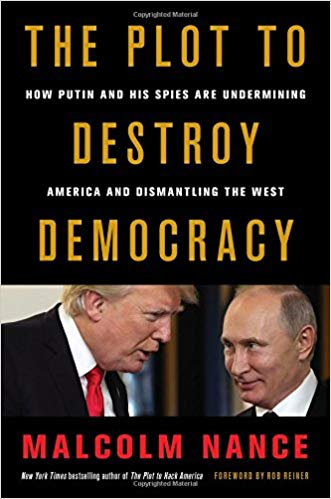 “This man is in debt. He is in to Moscow in the way a that a crack who has stolen two kilos of crack is in debt to a Colombian cartel.”

[Editor’s Note: Get a dose of reality about the very real gathering civil war threat we are facing. This interview is well worth the time. — Mark L. Taylor]

[Editor’s Note: Malcolm Nance is a former Navy counter intelligence officer. I would take varying degrees of issue with some of his comments in this interview, but the overall message is valuable insight on the Russian role in Trump’s White House policies. — Mark L. Taylor]

Malcolm W. Nance is a career counter-terrorism and intelligence officer for the U.S. government’s Special Operations, Homeland Security, and Intelligence agencies, with over 33 years of experience in combating radical extremism. A frequent guest commentator on breaking news, he is the author of “The Plot to Hack America: How Putin’s Cyberspies and WikiLeaks Tried to Steal the 2016 Election”, among other books. Drawing on his experience as a 20-year veteran of the US intelligence community’s Combating Terrorist program, he’s been a consultant for the US government on special operations, homeland security, and intelligence. Nance serves as a member of the Board of Advisors here at the International Spy Museum.