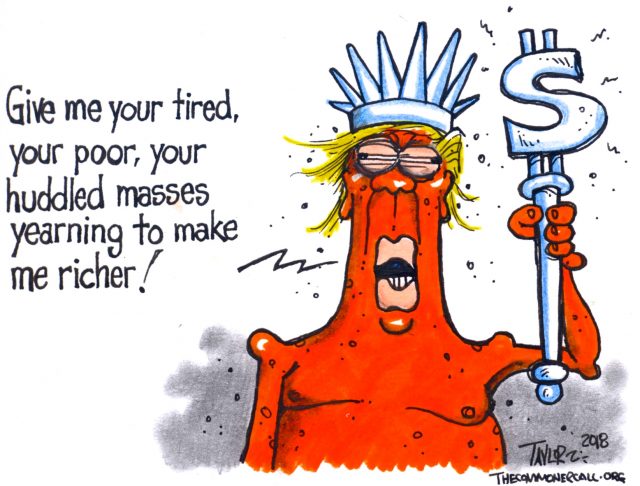 First lady Melania Trump’s Slovenian-born parents were sworn in as U.S. citizens Thursday, benefiting from a path to citizenship known as family-based immigration that the president and others have derisively dubbed “chain migration.”

Viktor and Amalija Knavs, both in their 70s, attended a private swearing-in ceremony in Manhattan, according to their lawyer, Michael Wildes, who said the couple had “travailed a wonderful journey” to become Americans.

“This golden experiment, these doors that are in America, remain hinged open to beautiful people as they have today,” Wildes said after the ceremony, according to The Associated Press.

The lawyer acknowledged that the Knavses had obtained citizenship via the very pathway that their son-in-law, the president, has so publicly denounced. Wildes called chain migration a “dirtier” way of characterizing “a bedrock of our immigration process when it comes to family reunification,” according to The New York Times.

The AP writes that arriving at the ceremony, the Knavses “slipped in and out of a side entrance at a Manhattan federal building flanked by Department of Homeland Security police. Some workers inside didn’t know what was going on.”

Family-based immigration has been a frequent target of the president in his many tweets and speeches. …

Since 2005, Ivanka’s Makeup & Hair Has Been Done By … A Mexican Immigrant!

How does Ivanka Trump maintain such a glamorous look while her soul shrivels up like the Grinch’s? Mexican immigrant Alexa Rodulfo knows how—she’s been helping Ivanka do her face and hair since 2005! Refinery29 has the heartwarming story of Alexa Rodulfo. Rodulfo was born in Juárez, Mexico, and moved to the United States in 2005.

“Rodulfo tells Refinery29 that she started doing Trump’s hair and makeup in late 2005 after being introduced through a friend. “Ivanka and her friends were hosting the New York Botanical Garden gala that year and one of her friends was already a client of mine,” Rodulfo says. “She booked me to do the hair and the makeup for them, and that’s how we met. Since then, we have been working together.””

She’s a real “American Dream” success story. It’s too bad that she’s probably a drug dealer and a rapist, according to Ivanka’s boss and dad, Donald Trump. …

President Donald Trump often conveys a strong preference for American workers. But as a request from the president’s Mar-a-Lago golf club to hire 61 people from abroad demonstrates, putting that preference into practice can prove difficult.

The president’s Florida resort — which he has promoted as the “Southern White House” — filed requests with the Department of Labor to obtain 61 visas for foreign workers, according to Job Order records posted Thursday by the department’s Employment and Training Administration.

The Mar-a-Lago club asked for 40 H-2B visas for servers and another 21 for cooks. The H-2B visa is for “temporary non-agricultural workers.”

According to the Department of Homeland Security’s U.S. Citizenship and Immigration Services, the employer filing for H-2B visas must demonstrate that there are “not enough U.S. workers who are able, willing, qualified, and available” …