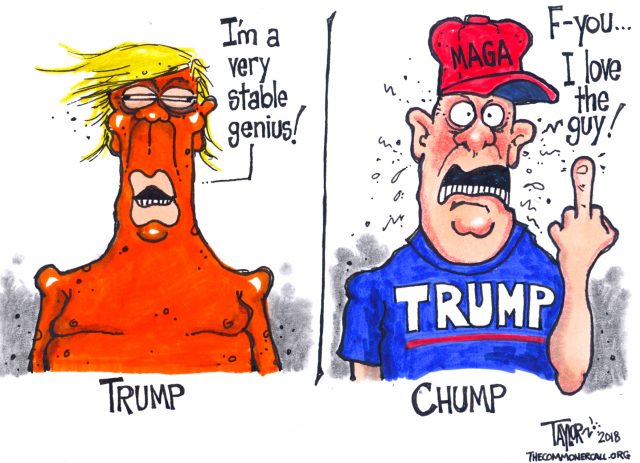 There’s no doubt that Donald Trump has said many things that would have been political suicide for any other Republican. And almost every time he made one of these shocking statements, political analysts on both the left and the right predicted that he’d lose supporters because of it. But as we have clearly seen over the past year, they were dead wrong every time. Trump appears to be almost totally bulletproof.

The only thing that might be more perplexing than the psychology of Donald Trump is the psychology of his supporters. In their eyes, The Donald can do no wrong. Even Trump himself seems to be astonished by this phenomenon. “I could stand in the middle of Fifth Avenue and shoot somebody, and I wouldn’t lose any voters, OK? It’s, like, incredible

Senator John McCain, who has been a regular target for Trump, has a simple explanation for his unwavering support. “What he did was he fired up the crazies.”

While the former Republican presidential nominee may be on to something, he doesn’t exactly provide a very satisfying scientific explanation.  So how exactly are Trump loyalists psychologically or neurologically different from everyone else? What is going on in their brains that makes them so blindly devoted? …

Whoops, Sorry Honey! Combat Veteran Votes For Trump Only To See His Wife Deported To Mexico.

Her husband, who voted for Mr. Trump, said he didn’t think that vote would affect his family.

Carrying her bags and weighed down with emotion, Alejandra Juarez arrived at Orlando International Airport to say goodbye to her two daughters and husband, a Marine veteran. Rather than be deported, Juarez — a U.S. military wife who illegally entered the country 20 years ago — headed back to Mexico.

On Friday, she spoke directly to the president in Spanish.

“He thinks he’s punishing me, and maybe I deserve it for having come the way I did,” she said. “You’re not making me suffer more, you’re making a veteran suffer, and you always say you love veterans.”

Juarez has been in the country for two decades. She married Marine veteran Sgt. Temo Juarez, a naturalized American citizen who served two years in combat in Iraq. Their daughters were born in the U.S. …

SHERRARD, Illinois ― Krista Swanson is a fifth-generation farmer. So is her husband. They have three young daughters who they hope that, one day, will be the family’s sixth generation of corn and soybean growers.

That dream is looking dim right now. Here in central Illinois ― the number one soybean-producing state ― grain farmers have lost a whopping 20 to 25 percent of the value of their crops since March, when President Donald Trump unexpectedly announced $60 billion in tariffs on Chinese imports. China, which buys the bulk of U.S. soybean exports, responded in April with a 25 percent tariff on U.S. soybeans.

It was, at times, mind-boggling to hear farmers describe the kind of financial hit they’re bracing for ― and then skip over that this was caused by Trump.

When Trump followed up in May with more tariffs, this time on trading partners like Canada and Mexico, Swanson watched the value of her crops plummet.

“You actually lose every day,” said Swanson, a member of the Knox County Farm Bureau. “You’re still paying to go to work and back, and make and buy lunch, but you’re losing money. Who would want to keep doing that, you know?”

For some context on the severity of the situation, Swanson said in March the average central Illinois grain farmer expected a net income of about $35,000 this year. Those farms are now “substantially” in the negative, she said.

Yet, asked if she’s angry at Trump for starting a trade war and potentially driving her family farm into the ground, Swanson wouldn’t blame him for anything. She compared it to farmers dealing with challenges like droughts or pests. …

Layoffs are already beginning in response to the trade standoff between the United States and China.

Russian asset Donald Trump has finally deployed one more Affordable Care Act sabotage, one that everyone in the industry, from insurance companies to providers, has panned. It’s an expansion of short-term, limited-duration plans allowed under Obamacare that functioned as a stop-gap for people waiting to secure permanent insurance.

These plans aren’t subject to the comprehensive benefits and protections that regular insurance plans must cover under the law. They had been allowed for a maximum of three months under the law, but the Trump administration is stretching that out to 364 days, a day short of a year to skirt under the law, with the option for two renewals. Meaning people could be “covered” by these skimpy plans for up to three years.

The plans are going to be cheap, which will be their big attraction. …

Many Trump Voters Have Shown Themselves To Be Hateful & Violent. It’s Past Time To Stop Normalizing Them

Tuesday night at his rally in Tampa, Florida, Donald Trump did what he always does: spouted nonsense, told massive lies about his accomplishments, and proved himself completely unfit to hold the office of the president. This is now our new normal and is to be expected. But something else he did was continue to stoke hatred and division among his supporters which was partially directed at the media—specifically at CNN, and the network’s anchor, Jim Acosta.

Right there on video, we can see Trump’s rabid base shouting down the media and giving the middle finger. As you watch this and other footage, you cannot help but worry about Acosta’s physical safety—given what we know to occur at Trump rallies. Remember that it wasn’t so long ago, when Trump was just a candidate, that MAGA crowds in various parts of the country pushed, kicked, spat at and inflicted all kinds of bodily harm on black and brown protesters who showed up to oppose their beloved leader. They were egged on by Trump himself, who encouraged them and even said he’d pay the bail fees for anyone arrested at his rallies for taking on protestors.

We all know that Donald Trump is a monstrosity and that this presidency is a disaster and embarrassment. But it’s beyond time that we also admit that he is inciting widespread violence and mayhem. According to the FBI, hate crimes are up since he was elected. And according to the Southern Poverty Law Center, they are up since he became a candidate for public office. And yet, the mainstream media presents these facts as if they are in a vacuum. They are not. They are the direct result of a wannabe dictator who appeals to white supremacy and hatred in the hearts of millions of people. And let’s be clear: they are indeed hateful and violent. …

During the Obama era, sizable swaths of the American public—Republicans in particular—embraced absurd conspiracy theories, like the idea that President Barack Obama was a secret Muslim (who, nevertheless, regularly bombed Muslim-majority countries).

Needless to say, Republicans have not exactly become more critical and nuanced thinkers with the ascension of Donald Trump to the Presidency.

Here’s a list of strange things Republicans seem to believe in the era of Donald Trump—and the horrendous policies issuing from them.

Public ignorance among conservatives could be chalked up to the misinformation and lies peddled by Fox News. President Donald Trump’s penchant for publicity didn’t help make Americans any more well-informed either: the reality TV star used his celebrity platform to stoke suspicions that President Obama wasn’t really American. …

US Border Officer Uses Nazi Nuremberg Defense To Explain Involvement In Separating Families: “We were all told to do this.”