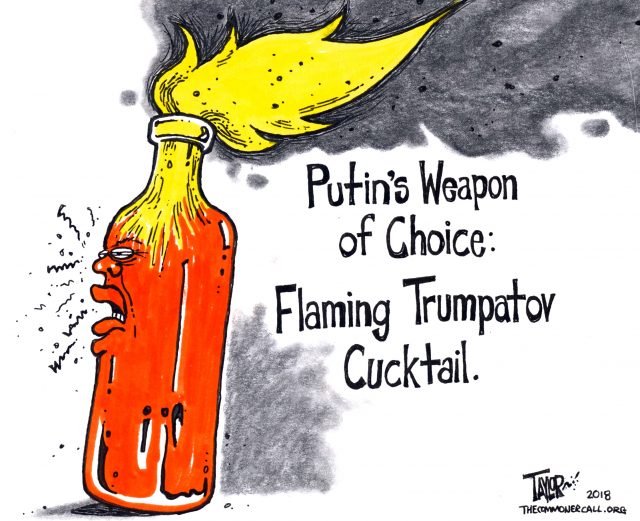 “Whatever you say, comrade.”

The best disinformation and psy-ops campaigns are supposed to leave you dazed and confused, unable to discern truth from fiction, friend from foe, right from wrong.

So those who watched Donald Trump’s extraordinary press conference alongside Vladimir Putin might well be feeling nauseous, several hours later.

Listening to Trump’s responses about Russian acts of aggression, it was hard to know who was playing the role of the American president. His performance was so nakedly, brazenly pro-Russian, you had to wonder what ranks higher on the Trumpian scale of stupidity: the president’s own intellect or his dim view of ours.

At a time like this, have a heart for the Republican party that suffers this unpatriotic nonsense in silence. There’s nothing else we can do for them now. We can only send them our thoughts and prayers.

George Orwell conjured up a totalitarian regime where Ignorance Is Strength, but he surely never conceived of this. How can we know that two and two make four, or that the DNC isn’t responsible for its own hacking, or that Vladimir Putin isn’t a bigger American friend than the entire European Union and Nato alliance?

As Trump explained so clearly, when he talks about Russia as a rival, he really means it as a compliment, no matter what your lying ears have told you.

So you may have heard him tell CBS that Russia is a “foe in certain respects”. But you obviously heard wrong. Right?

“Well, actually I called him a competitor,” said Trump, flicking the gaslight on and off. “And a good competitor he is. And I think the word ‘competitor’ is a compliment.”

Whatever you say, comrade. …

The president fails to protect the country from an ongoing attack.

Put aside whatever suspicions you may have about whether Donald Trump will be directly implicated in the Russia investigation.

Trump is right now, before our eyes and those of the world, committing an unbelievable and unforgivable crime against this country. It is his failure to defend.

The intelligence community long ago concluded that Russia attacked our election in 2016 with the express intention of damaging Hillary Clinton and assisting Trump.

And it was not only the spreading of inflammatory fake news over social media. As a May report from the Republican-run Senate Intelligence Committee pointed out:

“In 2016, cyber actors affiliated with the Russian Government conducted an unprecedented, coordinated cyber campaign against state election infrastructure. Russian actors scanned databases for vulnerabilities, attempted intrusions, and in a small number of cases successfully penetrated a voter registration database. This activity was part of a larger campaign to prepare to undermine confidence in the voting process.”

And this is not simply a thing that happened once. This is a thing that is still happening and will continue to happen. As Director of National Intelligence Dan Coats told the committee in February, “Persistent and disruptive cyberoperations will continue against the United States and our European allies using elections as opportunities to undermine democracy.” As he put it, “Frankly, the United States is under attack.” …

Jon Huntsman, the U.S. ambassador to Russia, is in a terrible, but entirely predictable, situation: Days after Huntsman spoke about the need to hold Russian government officials accountable for interfering in the 2016 election, his boss, President Donald Trump, stood alongside Vladimir Putin on Monday and told the world he believed the Russian president’s denial of any wrongdoing.

Trump made a muddled attempt to walk back those comments on Tuesday, but the damage had been done. Huntsman’s former colleagues and even family members suggested the ambassador was wasting his time trying to represent U.S. interests in Russia under Trump.

Jon Huntsman has spent decades cultivating a reputation as a pragmatic Republican. Now some of his allies are urging him to ditch the Trump administration.

“Resign, if you have any honor,” John Weaver, a political consultant who worked on Huntsman’s 2012 Republican presidential campaign, tweeted.

“You work for a pawn, not a president. It’s time to come home,” wrote a columnist at the Salt Lake Tribune — a paper owned and published by Huntsman’s brother Paul.

Even Huntsman’s own daughter weighed in. …