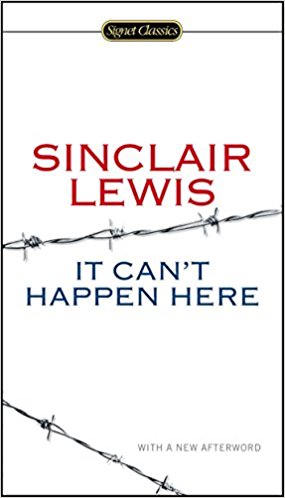 In 1935, the third year of Hitler’s Third Reich, Sinclair Lewis published a novel called “It Can’t Happen Here,” speculating on the possibility that fascism might come to America. This spring, the legal scholar Cass Sunstein wondered in an articletitled “Can It Happen Here?” whether a native fascism might now at last be in the offing.

Note to Sinclair and Cass: it has happened here. In Donald J. Trump, America now has its first fascist president.

I don’t say this loosely or pejoratively to describe a politician I don’t like. I say it with as much precision as I can, because this country is in the deepest and most awful trouble any of us have known. Donald Trump didn’t run on a fascist ticket; the Republican Party he captured in 2016, dreadful as it was, nominally followed democratic norms. Trump didn’t proclaim himself a fascist. Possibly, he didn’t know, or even now perhaps doesn’t know himself to be one. But he fits the definition, and now he fills the bill.

Why call Trump a fascist?

What defines a fascist? Firstly, a fascist denies the rule of law. This means that he knows no will but his own, and recognizes no limit on his power. To achieve such power, he must defy, circumvent, or simply ignore all other established authority, and destroy the institutions through which it is exercised. In America, these are the three branches of government, and the fourth estate of the press. Congress was created to make laws for the nation at large. The judiciary, within its proper bounds, interprets them. The executive, which Trump heads, enforces them. The press — more broadly now, the media — keeps tabs on how well the process works.

We didn’t get into this fix by accident and we won’t get out painlessly, if at all. Trump is as much a product of our country as Hitler and Mussolini were of theirs.

From the beginning, Trump took a sledgehammer to all of these institutions. He has no interest in legislating, mocking Congress as a body and personally attacking its members. He will demand that it act to solve the messes he makes, refuse to indicate what he wants or is willing to approve, and gives both houses the bird when they offer him solutions tailored to please him. This isn’t just a man who can’t make up his mind or even maintain an attention span. Trump is deliberately bent on breaking the legislative branch as such, strangling its functions and humiliating its members. The law will be what he declares it to be on any given day, and if he gets any pushback from the courts, he denigrates them as well, juggles a word or two, and comes back the next day with the same edict.

The executive has suffered no less. Trump ignores or attacks laws he doesn’t like, and has maintained a running attack on the Justice Department, the State Department, the Education and Labor departments, and the regulatory and scientific agencies. Nor, when interests allied to him challenge existing statutes, will he defend them. He is simply uninterested in the functions of government as such, except as an instrument of his will or in the service of his private business empire.

The one institution Trump has attacked most relentlessly is the press. The goal of fascism is to replace news with propaganda, a reflecting mirror that eliminates all competing views of reality. The fuel propaganda runs on is the lie, and the lie replaces the real when it can freely contradict itself: the content of the lie is unimportant, for what validates it is merely the source. A very substantial percentage of the American public now believes whatever Donald Trump says because he is the one who says it. And when he says that the press is all about fake news, that becomes for them the truth.

Aggressive nationalism, menacing militarism and a complete contempt for international rules, norms and agreements are also characteristic of fascism. Racism is a concomitant of this. America, for all its flaws, is the most successful example of a multiethnic society since the Roman Empire. Donald Trump has remolded it, at least for his base, as a beleaguered master race, threatened by invaders who would usurp its wealth, destroy its character and contaminate its gene pool. The site of this plot against true Americans is within the state itself, a so-called “deep state” that works tirelessly to undermine the nation and its values. Ultimately, the only way to drive the plotters from their dark corners is to dismantle the state itself, leaving only the Leader, Trump himself, in command.

If there is one enemy all forms of fascism seek to destroy, it is democracy, not only at home but abroad.  And no political leader since Hitler has taken more deliberate aim at other democracies as well as his own. Trump has shown sneering contempt for the world’s democracies, insulting their leaders, mocking their societies, and flat-out lying about everything from the crime rate in Germany to the nonexistent trade deficit with Canada. Agreements have been trashed, commitments tossed in a tweet, and alliances scuttled. Trump’s ambassador to Germany, Richard Grenfell, has more or less openly called for the replacement of that country’s center-right government by authoritarian populists.

At the same time, Trump has, one by one, embraced the world’s most obnoxious despots. They are in fact his kin, and if he is not yet able to rub out opponents, launch bloodbaths, and run gulags, it is not for lack of ambition. His astonishing performance this past month, walking out in a hail of insults on a watered-down communique designed to save face at the G-7 summit to fly early to Singapore to embrace Kim Jong-un, the world’s worst dictator, tells the story in a nutshell.

We didn’t get into this fix by accident and we won’t get out painlessly, if at all. Trump is as much a product of our country as Hitler and Mussolini were of theirs. The decline of Congress and the growth of an unchecked executive; the erosion of community and commonwealth and the entrenchment of unaccountable elites; a falling life expectancy and a rising suicide rate. These are both cause and consequence of a country that, for most of my adult lifetime, has been losing its way. If Donald Trump was and is something unimaginable, we must also recognize the degree to which he was also inevitable.