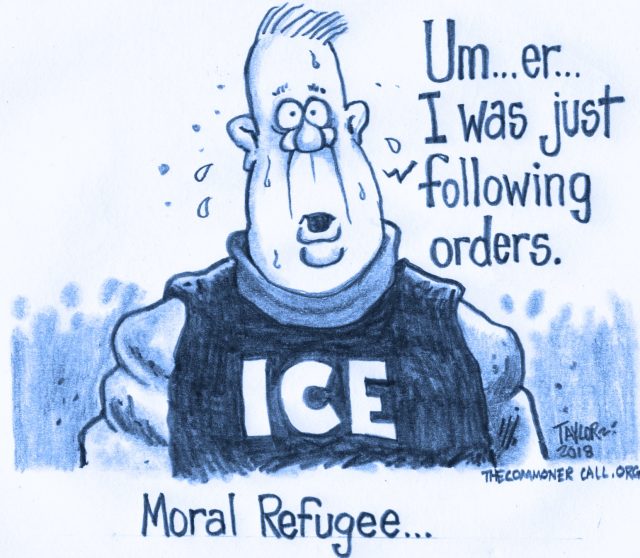 [Editor’s Note: Falling back on the mindless and morally empty excuse of “just following orders” does not exonerate soldiers, police or prison guards from bearing personal moral or legal responsibility. This was one of the principles that came from the Nuremberg Trials of World War II Nazi war criminals. Be careful what orders you follow, officers. — Mark L. Taylor]

A new report finds that individual Immigration and Customs Enforcement (ICE) agents could be held personally liable for the suffering of families and children under the Trump administration’s “zero tolerance” immigration policy—and warns that the confirmation of Judge Brett Kavanaugh to the U.S. Supreme Court could harm the chance of anyone being held accountable for the forcible separation of families.

U.S. District Judge Dana Sabraw’s order that the government reunite all children under the age of five with their parents went largely unheeded yesterday, as the court-imposed deadline passed with fewer than half of the children being returned to their families.

The disregard for Sabraw’s order would ordinarily put officials including Health and Human Services Secretary Alex Azar at risk for being held in contempt of court, according to Attorney IO, a resource service for attorneys that released the new report on Wednesday.

“While such employees may say they were ‘just following orders,’ their highest command is to uphold the Constitution. This overrides any contrary decision from ICE or even Trump himself.”

But law experts interviewed by the firm are also debated how other agency officials could be held accountable—”especially with an administration that might not care about reputational costs,” noted Prof. James E. Pfander of Northwestern University—and some say it’s more likely that ICE agents who are carrying out the Trump administration’s orders could face consequences.

“A civil damages suit is an avenue that we are actually looking into here at Cornell, because we have been thinking that the damages caused by the prolonged family separation may be significant enough to warrant a damages suit,” said Prof. Jaclyn Kelley-Widmer of Cornell Law School.

In civil suits, police officers have been ordered to pay millions of dollars in damages to victims who they’ve injured. With reports surfacing of pregnant women in ICE custody suffering miscarriages after being abused and neglected; children who have beenunable to recognize their parents after being reunited; detained women being kept outside in sweltering heat to keep them away from Homeland Security Secretary Kirstjen Nielsen when she visited a facility; and allegations of torture at a detention center in Virginia, agents could be ordered to pay far more.

“The monetary risk to ICE employees here is proportional to this enormous harm,” wrote Alexander Stern, CEO of Attorney IO. “Judge Sabraw is perhaps speaking directly to ICE employees who are unsure of whether to heed unconstitutional orders. He said, ‘The injury in this case, however, deserves special mention. That injury is the separation of a parent from his or her child, which the Ninth Circuit has repeatedly found constitutes irreparable harm.'”

A lawsuit against ICE agents could also invoke the 1971 Supreme Court case Bivens v. Six Unknown Named Agents of Federal Bureau of Narcotics, in which federal officers were found liable after subjecting Webster Bivens to a warrantless search, handcuffing, interrogation, and a strip search.

In the Bivens case, the plaintiffs “could not seek damages against the United States or a federal governmental agency because of sovereign immunity,” notes Stern—creating “a huge tension between ICE itself and ICE’s employees.”

“ICE may have a much stronger claim to legal immunity than the officers themselves,” reads the new report. “While such employees may say they were ‘just following orders,’ their highest command is to uphold the Constitution. This overrides any contrary decision from ICE or even Trump himself. Violation of this duty could be very costly to individual officers who participated in separating (or failing to reunify) migrant children and their families.”

The report notes that immigrant families’ potential ability to take ICE agents to task for their actions at the U.S.-Mexico border could hang in the balance should Kavanaugh be confirmed as the next Supreme Court justice.

“Trump SCOTUS pick Judge Kavanaugh is not only very conservative; he has been chided by fellow judges on the D.C. Circuit Court for his ‘doomsaying’ opposition to financial accountability for individual law enforcement officers,” writes Stern. “The Senate battle over his confirmation may decide the fate of a potential lawsuit against ICE officers who participated in the separation and failure to reunify by the court’s deadline.”

But the report advised ICE agents against assuming that they will be able to escape accountability as President Donald Trump and Azar have thus far.

“Judge Sabraw was scathing in his order requiring reunification. He said, ‘A practice of this sort implemented in this way…interferes with rights ‘implicit in the concept of ordered liberty…and is so ‘brutal’ and ‘offensive’ that it [does] not comport with traditional ideas of fair play and decency,'” noted Stern.

“ICE employees who have participated in the failure to obey Judge Sabraw’s order to reunify should heed these words. Failure to do so may result in serious personal financial and legal risks,” he added.