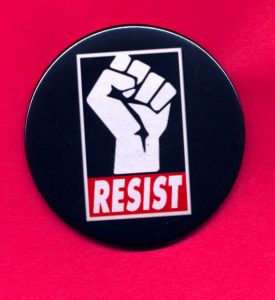 I keep the newspaper clipping inside a Milan Kundera novel: it shows demonstrators in Prague in 1989, one of them carrying a badly chipped bust of Stalin around whose neck hangs a placard that says nic netrvá věčně: nothing lasts forever. It’s not a war cry, nor a prophesy, but a bald statement of fact at the moment when the Soviet bloc Stalin had been critical in establishing was falling apart and Czechoslovakia was liberating itself.

It must have seemed like forever to those who lived under totalitarianism until all of a sudden “forever” crashed and burned. People worked to make it so at terrible risk; some were imprisoned, or otherwise punished. Some died. They worked without knowledge of how and when their efforts might matter, and the faith that drove those activists is still stunning to contemplate. I think of that history when I think of our present predicament in the United States.

We have talked about resistance a great deal these past 18 months or so, but I want to talk about opposition for a moment. You oppose a regime by standing up to it, but also by being its opposite. For this regime that means being compassionate and inclusive where they are vicious and exclusionary.

I know a lot of us have rage fatigue and moral exhaustion from a little over a year and a half of the hell of Donald Trump’s ascendancy. I know that seeing the vulnerable crushed, and the sabotage of the things that we fought for from reproductive rights to climate policies, and in particular the recent efforts to destroy small children weighs on most of us. I see and hear the dismay all around me at what is happening to this country, but dismay and devastation are emotions, and painful emotions can coexist with active strategies. Active strategies may be the best response to those emotions, not to take care of oneself but to forget oneself in responding to the larger crises. Slaves were devastated by slavery; Frederick Douglass and Harriet Tubman and Sojourner Truth were not felled by that devastation but driven to act by it, and they did not confuse their devastation for despair. Americans like quick results and predictable outcomes, and in pursuit of those things squeeze out room for the unknown and the unknowable. Despair is an analysis of sorts, a conclusion that nothing can be done; it is usually premature.

A year ago it did not seem likely that Mexico would elect a left-wing president and sweep into power hundreds of progressive candidates, many of them women, but that happened on the first day of this month. …

Dan Rather: The Time For Slumber Is Over. It’s Time For A Fury Of Action

From the farce of yesterday’s hearing on Capitol Hill (“oversight” by mendacity) to the spectacle in Great Britain (a President’s destabilizing, unstable, and racist interview) to the trailing exhaust of American leadership left in Brussels (with a friend like the U.S. who needs… Russia?) to what awaits in Helsinki (a bromance with a wily KGB agent), what we are witnessing is far beyond the realm of this reporter to put into full context.

Even with the hurdles they are erecting to democracy no President and no political party, no matter how cynical they may be, is bigger than the country at large.

I doubt Dante could imagine the circles in which we find ourselves. P.T. Barnum couldn’t figure out a way to sell it. And Rod Serling would shake his head in disbelief. All metaphors are rendered largely impotent – be they circus, swamp, or dumpster fire – because they seem to understate the sheer dangerous absurdity of it all. There can be no individual accounting of all damage.

I surmise this is what in some ways passes for the strategy of the President and his accomplices. See how many reactionary judges they can install, how many loopholes for the rich and connected they can construct, how many protections to health, water and air they can shred before the inevitable backlash.

I list all of this not to sow the seeds of hopelessness. Quite the contrary. That is what the forces of authoritarianism wish – that they can launch a reclamation of the Gilded Age on the backs of a demoralized majority. But I have seen these types of actors before. I have seen these odds. They cannot understand that the forces of goodness can channel a fury of righteousness and action. The time for slumber is over. No one can ever argue that elections do not have consequences. Even with the hurdles they are erecting to democracy no President and no political party, no matter how cynical they may be, is bigger than the country at large.