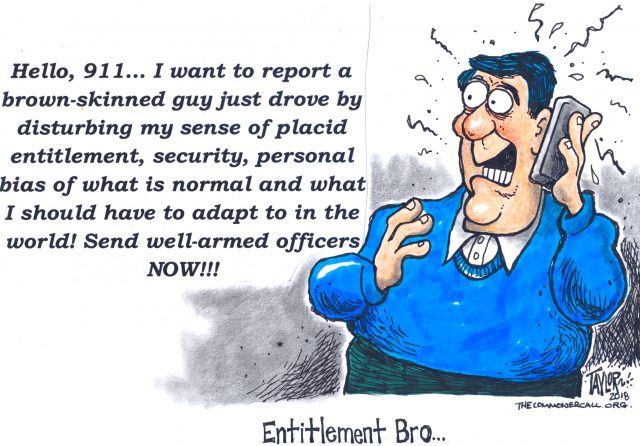 [Editor’s Note: I ask this as a 65 year-old white guy: What the hell is wrong with so many white people? My cartoon above is a humorous expression of something dark and vile baked deep into the bones of white people; to one extent or another, all white people. Myself, I am ashamed to admit, included. There’s nothing funny about it. It is the great undone work of this nation and our individual lives. — Mark L. Taylor]

The concept of there being “two Americas” is almost as old as the nation itself. From the outset there were the landowners, the ruling class – the “haves”. And then there were the have-nots. That divide has been economic but also racial, with minorities claiming a disproportionately small share of the nation’s substantial wealth. And yet, a 2013 Pew Research Center study showed that half of white Americans surveyed do not feel that African Americans are treated less fairly by the police, employers, doctors and others. Only 13% of blacks felt the same way.

Amid the current backdrop of the Black Lives Matter movement and increasing wealth disparity, Clive Myrie from the BBC’s This Week’s World delves into what white Americans understand – or don’t – about race. 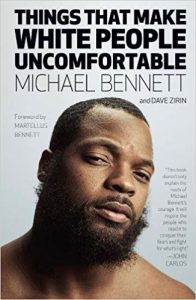 Over the past two seasons, dozens of National Football League players have knelt during the national anthem to protest police shootings of black teenagers and men like Antwon Rose, a 17-year-old unarmed African-American teenager who was shot dead by East Pittsburgh police last week. The NFL’s on-field protests began in August 2016 when quarterback Colin Kaepernick refused to stand for the anthem to protest racism and police brutality.

The National Football League announced last month that it will fine teams if players refuse to stand for the national anthem before games. Under the new rules adopted by the league’s 32 owners, players will be allowed to stay in the locker room during the anthem.

We speak with NFL three-time Pro Bowler and longtime activist Michael Bennett, who has been part of a movement, led by former 49ers quarterback Colin Kaepernick, protesting police shootings of unarmed black men. Bennett was recently traded to the Super Bowl champions Philadelphia Eagles—the same team President Trump recently disinvited to the White House. He is the author of a new book, “Things That Make White People Uncomfortable.”