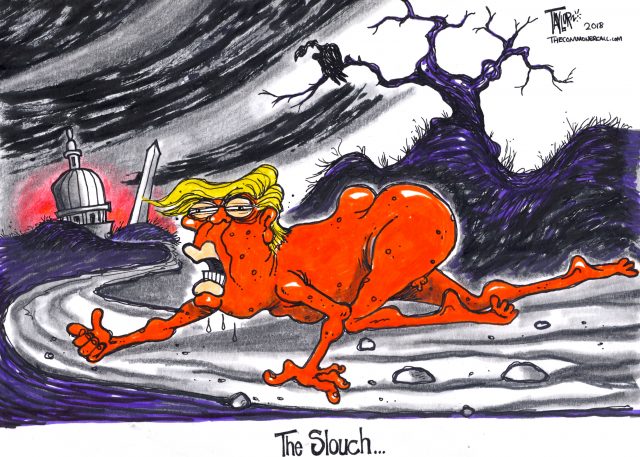 Things fall apart; the centre cannot hold;Mere anarchy is loosed upon the worldThe blood-dimmed tide is loosed, and everywhereThe ceremony of innocence is drowned;The best lack all conviction, while the worstAre full of passionate intensity.

Apocalyptic thinking has been with us for a long time, and it sometimes ushers in actual apocalypses, albeit at human scale, without biblical finality. For a century now, the Yeats poem above has served as an increasingly common reference point for those who fear apocalyptic events approaching. Today such fears are varied, the threats are real, and reactions range from crisis-mongering to self-serving denial, making any rational, coherent societal response almost impossible.

We’ve been heading this way for decades. We finally got here in 2016. It’s taken awhile, but the forces of chaos and greed seem to be cohering, tightening their grip on power, on government and culture, facing little or no effective opposition. An election is coming. It will matter. But how?

Worse, things are under attack, the center is the enemy. The US president veers toward dictatorial powers and seeks out new targets to disrupt or destroy. The US wages war around the world in at least 7 countries (with combat forces in 146 according to Seymour Hersh). The US Environmental Protection Agency wages war on the environment along with public health and safety. The US Education Department wages war on public education. The US Justice Department wages war on Justice, turning law enforcement into a profit-making, human-trafficking criminal enterprise. The US Department of Housing and Urban Development wages war on the poor, as do other agencies. The US Labor Department wages war on labor. The US Supreme Court wages war on pretty much 99% of the population. And so it goes: almost everywhere one looks, there is almost no center left to hold. Resistance is scattered, ineffective, inconsistent, fragmented – mere anarchy is loosed upon the world.

The blood-dimmed tide is loosed, and everywhere
The ceremony of innocence is drowned;

This is our country that has loosed a blood-dimmed tide across the globe for decades, this is American exceptionalism that has flooded countries from Iran to Guatemala with its citizens’ blood for American ends. This endless flow of American violence and death has drowned our innocence, and still so many of us pretend there is no blood on our hands, no blood up to our eyeballs, no blood vengeance haunting our future.

That’s not the way we see the border, but that’s the way the border is. American-sponsored dictatorships and genocides are sending the children of their victims to our borders where we victimize them again and again and again. And finally, at least more than just a few people notice who and what we are, and who and what we have been for so long, and there is horror, at least for some. No border guards are yet showing signs of conscience as they carry out unlawful orders, but at least one immigration judge has expressed embarrassment at asking a one-year-old if he understood the proceedings the US was putting him through.

The best lack all conviction, while the worst
Are full of passionate intensity.

And so we head for another election on November 6, bitterly divided as a country. It’s a so-called off-year election (no presidential race), but it may be darkly viewed as the last stand for the American democratic republic. Some say that 242-year-old experiment has already failed, and there’s logic to that opinion. The decline has been long, slow, relentless and the end will not likely be apocalyptic.

We’re heading into the 2018 election with polling that shows only a slight majority of Americans– around 53% – opposed to the direction of the country, opposed to Republicans, opposed to Trump. Republicans currently control the presidency, both houses of Congress, and the Supreme Court (with another justice online). The election can’t change the presidency. The election can’t change the Supreme Court directly (especially if Kavanaugh is approved beforehand). The election can change either house of Congress, neither of which is anything like a sure thing. If the House gets a Democratic majority, that puts all legislation on the negotiating table and raises the possibility of articles of impeachment for which this president has qualified since day one of his presidency. If the Senate gets a Democratic majority, that also makes all legislation negotiable and makes it harder for Republicans to pack the courts. If both houses of Congress get Democratic majorities, that gives the American experiment a chance to continue, dependent on Democratic courage long in short supply.

And what rough beast, its hour come round at last,
Slouches towards Bethlehem to be born?

So ends The Second Coming by Yeats, inconclusively, suggestively. There’s no knowing what may happen to head off our own rough beast slouching toward November. Perhaps Mueller will go public on Trump crimes. Perhaps the trade war will implode the US economy. Perhaps Trump will sack Mueller (or some other critical figure). Perhaps enough people will recognize – and reject – the already functional police state created by ICE jurisdiction. Perhaps Republican Senator Richard Burr, already on record as chair of the Senate Intelligence Committee that Russian collusion in 2016 happened, will seize the moment to hold hearings to learn “What did the President know and when did he know it?”

Or perhaps the fascist coup, the totalitarian American state, is already upon us and we’re only waiting for massive popular passivity to confirm it. There are those, after all, millions who seem to believe that Donald Trump really is the Second Coming.