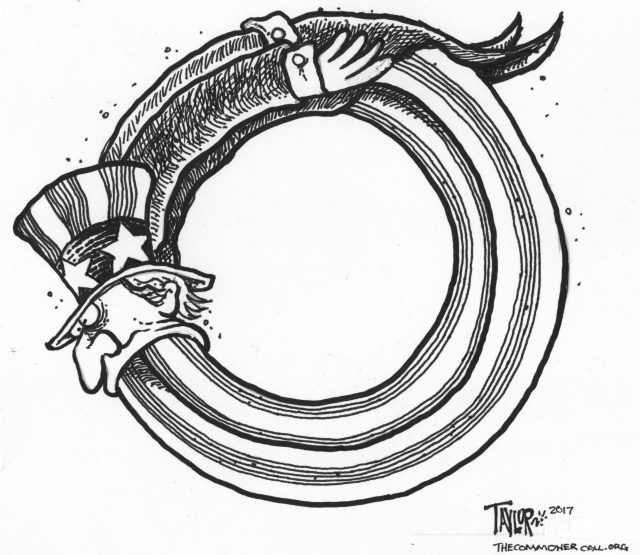 Scott Pruitt resigns, so what?

The appointment of an anti-environmental crusader to run the EPA was a disaster for sure, but the blueprint for fouling our Ecological nest has been in the DNA of our culture from Day 1. Pruitt’s narcissism and need for taxpayer funded perks is almost a caricature of the spoiled rich kid grown old and entitled, but how does that differ from the greed and avarice of the entire economic/political system we salute daily? Wall Street’s “Greed is Good”, Ayn Rand’s “producers”, Manifest Destiny, the War on Terror, and every other catch phrase for exploiting our physical space and “lesser” peoples” are justifications for the kind of behavior that Pruitt maximized. His going over the top is a teaching moment, his excesses point to ours.

Pruitt has shown us how stupid and bought off we are, by a marketed lifestyle and political indoctrination, to allow ourselves to be so greedy, blind, and irresponsible.

An alternative paradigm is sustainability, where all of the costs of an activity are investigated, and priced out, before acting. An activity such as fracking, for example, has a series of “external costs” that are not allowed to be considered in the price of the output by the likes of Pruitt. These costs include copious amounts of green house gases being released before the products reach the consumers, water pollution, and natural vistas being despoiled by infrastructure. But are they being considered by us, the consumers as long as our energy is cheap? Do liberals understand that the same chemicals polluting groundwater, the same fire coming from a kitchen faucet, the same methane leakage from wells and distribution systems was advanced in Eastern Europe by our star, HRC, in her role as commie bash-er/Secretary of State? Did our democracy decide to unleash that technology in another region because it was good for the locals, or was it just Pruitt, with another face, acting selfishly and blindly towards the planet and its other species in a trade-off of bad practices for political gain?

Do we care more about Bears Ears in our back yard, than Romania, or are we just happy that gasoline is a third the cost of bottled water at a Kwik Trip? Would we allow fracking anywhere as a way to get energy if we priced these costs into our purchases? Wherever and however you extract from the earth, what is the cost of wrecking clean water? What is the cost of runaway climate change?

Pruitt represents the petty excesses of the aristocracy of old, but so does a culture that was built on stealing land from natives, wrecking it, and moving on. Like the snake that eats it’s tail, we are at the end of that road. We will either be swallowed up by our greed and insensitivity to the fragility of the balance we have been given, between frozen vacuum and burning fire, or we will put on our big boy pants and find better ways to fit into the interconnected web of life and its consequences.

The reality is that there are sufficient resources for everyone on the planet to lead a peaceful and prosperous life. A political system that denies that is criminal. An economic system that relies on unrestrained growth is a cancer. The American political system, whose major parties are both owned by the cancer, has always been a tool of destruction. Pruitt has shown us how stupid and bought off we are, by a marketed lifestyle and political indoctrination, to allow ourselves to be so greedy, blind, and irresponsible.

Thanks Scott, for the clown show, you have been a magnifying glass for us to see our disease.

Environmental Protection Agency Administrator Scott Pruitt has resigned, amid an onslaught of financial and ethics scandals and widespread opposition to his campaign to roll back key environmental protections. President Trump announced Pruitt’s resignation via Twitter. Trump later told reporters, “Scott Pruitt did an outstanding job inside of the EPA. We’ve gotten rid of record-breaking regulations, and it’s been really good.”

At the time of his resignation, Pruitt was facing more than a dozen federal investigations into ethical misconduct, ranging from lavish spending to asking subordinates to help his wife find a job. Just earlier this week, CNN reported Pruitt kept a secret calendar and schedule in an attempt to hide his meetings with many industry executives.