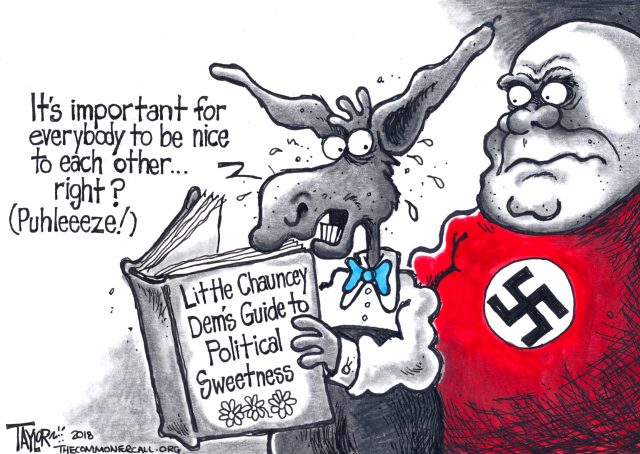 It would be wrong for the Democrats to seek reconciliation while the Republican Party organizes government to recognize only its ideology as legitimate.

Democratic politicians have a seemingly endless well of good faith for their Republican colleagues. Nancy Pelosi, Chuck Schumer and even Bernie Sanders all speak with the language of decency, full of assurances that Republicans will be heard, understood and engaged. They offer appeals to morality, norms and shared values as if saying it often enough will make it true.

But there is no salvaging the Republican Party. Its leaders are beyond shame, beyond rules, beyond reason. Democrats can speak in the dialogue of peace, but the only dialect Republicans understand is power.

If Democrats are to change the course of events, they will need to process that they, like all of us, have been utterly betrayed.

In the face of an unspeakable atrocity on our southern border ― constructed, announced and implemented by President Donald Trump’s administration, this Republican-led Congress does nothing and leverages none of its authority as a co-equal branch of government. Despite years of rhetoric about family values and shining cities on hills, the Republican Party allowed and tacitly condoned separating, perhaps irreparably, asylum seekers from the very children they fled here to save. Then, with more than 2,000 children still stranded away from their parents, they went on vacation.

To negotiate with such people, to treat them as colleagues and friends, to accept this as a normal partisan disagreement is to validate this grotesque hypocrisy.

This is what it means to give good-faith scoldings about civility when the barest hint of power is turned against those who constantly wield it as a weapon. This paradigm renders civil disobedience in the face of abuse outside the bounds of society. It civilizes lying daily for the purpose of obfuscating the sins and crimes the federal executive is committing against his own population. That the previous sentence makes sense is a tragedy, yet it is a greater calamity that both national parties are defending the order of a world in which it is true.

The Republican Party has gotten much out of this arrangement: a compliant press; an intractable base, and a consolidation of power heretofore unseen in U.S. politics. What benefits have accrued to the Democrats from all their pleasantry and open-mindedness? They have received nothing but scorn. …

(Commoner Call cartoon by Mark L. Taylor, 2018. Open source and free to use with link to www.thecomonercall.org )

Conservative Columnist: Why I left The Republican Party

“Should I stay or should I go now?” That question, posed by the eminent political philosophers known as The Clash, is one that confronts any Republican with a glimmer of conscience. You used to belong to a conservative party with a white-nationalist fringe. Now it’s a white-nationalist party with a conservative fringe. If you’re part of that fringe, what should you do?

If Trump announced he were going to spit-roast immigrant kids and eat them on national TV most Republicans probably would approve.

Veteran strategist Steve Schmidt, who ran John McCain’s 2008 campaign, is the latest Republican to say “no more.” Recently he issued an anguished Twitter post: “29 years and nine months ago I registered to vote and became a member of the Republican Party which was founded in 1854 to oppose slavery and stand for the dignity of human life,” he wrote. “Today I renounce my membership in the Republican Party. It is fully the party of Trump.”

Schmidt follows in the illustrious footsteps of Post columnist George F. Will, former senator Gordon Humphrey, former representative (and Post columnist) Joe Scarborough, Reagan and Bush (both) aide Peter Wehner, and other Republicans who have left the party. I’m with them. After a lifetime as a Republican, I re-registered as an independent on the day after Donald Trump’s election.

Explaining my decision, I noted that Trumpkins …