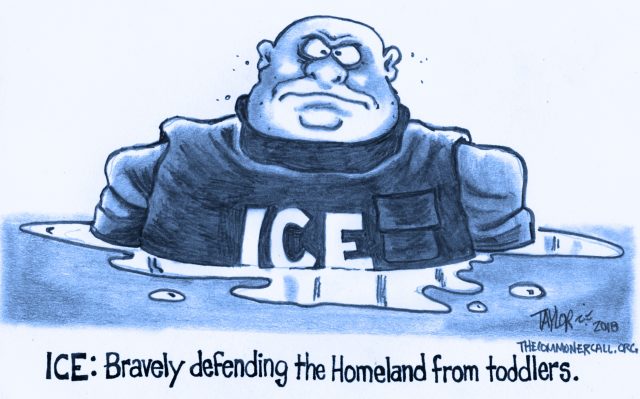 “How To Talk To ICE? Give ’em The Cold Shoulder.”

As the demand to abolish Immigration and Customs Enforcement (ICE) spreads across the country—and with community members building protest encampments outside ICE facilities in several cities this week—some officers with the 15-year-old agency have now added their voices to the growing call to dissolve it.

The agency’s targeting of undocumented immigrants has weakened its employees’ ability to carry out other work, argued 19 officers who signed the letter, which was obtained by the Texas Observer.

“It was never about crime. Never about MS-13. Always just about hurting less privileged people of color. All at the expense of actually protecting America.”

“The perception of investigative independence is unnecessarily impacted by the political nature of civil immigration enforcement,” wrote the agents to Homeland Security Secretary Kirstjen Nielsen. “Many jurisdictions continue to refuse to work with HSI because of a perceived linkage to the politics of civil immigration.”

The officers suggested that ICE be dissolved and its work divided among two new separate agencies, one focused on HSI and one focused on Enforcement and Removal Operations (ERO)—the unit which has enforced President Donald Trump’s hardline immigration policy.

As the Texas Observer reported, the Department of Homeland Security “shifted HSI funds to other parts of ICE to cover the costs of civil immigration enforcement, including $34.5 million in 2016.”

Lawmakers and the public alike have grown increasingly alarmed over the agency’s operations as ICE officers under the Trump administration, including forcibly separating children from their parents; conducting aggressive raids in private homes; detaining a man whose green card application was underway; and pressuring a spokesperson to lie about their work.

The call from ICE agents drew attention from Trump critics on social media, who said it put on clear display the fact that the president’s immigration policies have centered on persecuting immigrants, contrary to his claims that ICE is focused on protecting U.S. national security.

‘Even the cops don’t like us anymore’: Under Trump, ICE Is Despised & Divided

In May, Immigration and Customs Enforcement agents were spotted in Union Station. Their appearance triggered a phone call to Los Angeles Mayor Eric Garcetti’s office.

An LAPD officer reached out to David Marin, the director of Enforcement and Removal Operations for ICE in L.A.

Far from any raid taking place, Marin told the officer that the agents had merely gone there to get coffee.

“I get calls regularly,” Marin said earlier this month. “It was not like that at all up until this administration.”

This week, Rep. Mark Pocan (D-Wis.) stated that he plans to introduce legislation to eliminate ICE.

Across the nation, ICE has never seemed more visible, especially as anger continues over the separation of immigrant families at the border under the Trump administration’s “zero-tolerance” policy. Protesters have rallied across the U.S., demanding that the agency be abolished — calls that have been echoed by politicians. Earlier this month, WikiLeaks published the identities and information of more than 9,000 supposed current and former ICE employees.

Being an ICE agent has always come with challenges. The agency has faced criticism for years from immigration activists, including during the uptick in immigration enforcement during the Obama administration.

But Trump’s crackdown on illegal immigration has made ICE much more of a target. Oakland Mayor Libby Schaaf won praise from many of her constituents and criticism from the White House earlier this year when she alerted her city to upcoming ICE raids. …

Agents from the Department of Homeland Security (DHS) interrupted an interview with a former Immigrations and Customs Enforcement (ICE) spokesman on Wednesday.

CBS News reported that it was speaking with James Schwab about his decision to resign a few months earlier when DHS agents arrived at his home.

Schwab told CBS the agents asked if he’d been in contact with Libby Schaaf, the mayor of Oakland, Calif., who rankled conservatives earlier this year when she warned city residents of a pending immigration sweep.

“Why, three months later, are we doing this?” Schwab asked. “This is intimidation. And this is why people won’t come out and speak against the government.” …

Raphael A. Sanchez, who was chief counsel at the U.S. Immigration and Customs Enforcement office in Seattle when he opened credit cards and took out loans using the personal information of vulnerable immigrants, has been sentenced to four years in prison.

He took a plea deal with the Justice Department, which was approved by a judge on Thursday. He has also been ordered to pay more than $190,000 in restitution.

Sanchez — whose responsibilities included overseeing immigration removal cases in several states — stole and exploited the identities of people who prosecutors say were “particularly vulnerable given their status as deported or otherwise excludable.”

He also misreported his earnings in his IRS filings. And, the Justice Department said, Sanchez “claimed three aliens as relative dependents on his tax returns for 2014 through 2016.”

Once the stolen identities were established, Sanchez used them to open lines of credit, write to credit bureaus and transfer funds to his own accounts.

Sanchez, 44, pleaded guilty in February to one count of wire fraud and one count of aggravated identity theft. As part of his plea, he also signed a statement of fact acknowledging his actions.

That plea came just days after Sanchez resigned in the face of the charges against him.

In immigration cases, “government lawyers often point out how unauthorized immigrants use fake Social Security numbers to get jobs,” as KUOW has reported. The member station says people who worked with Sanchez were shocked by his behavior.

Sanchez opened bank accounts, utility service accounts and email accounts under immigrants’ names — filling applications with the names, dates of birth, Social Security numbers and other data that he took from ICE computers and files, according to the government.

He also used his work computer to create counterfeit documents, such as Washington state drivers’ licenses. …