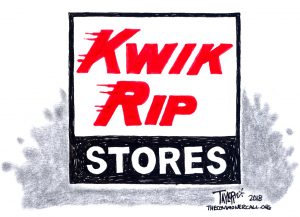 Owners and employees from about two dozen companies that received corporate welfare from the state in 2017 have contributed more than $800,000 to Republican Gov. Scott Walker’s campaign.

These companies were among the 59 businesses that were awarded nearly $3 billion in economic development tax credits and loans last year by the Wisconsin Economic Development Corp. The giveaways were made so the companies would either locate or expand their operations in the state. Most of the recipients, 50 of 59 (or 85 percent), were businesses already located in Wisconsin. 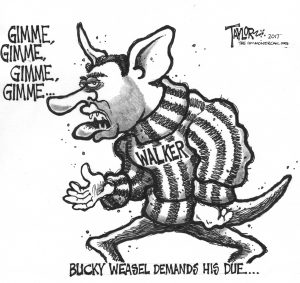 Owners and employees of 25 companies, which contributed about $809,000 to Walker’s campaign between January 2009 and December 2017, received about $66 million in tax credits or cheap loans. The top contributors and the giveaway the companies received were:

Foxconn will cost you even more

The top recipient of economic development tax credits and loans in 2017 was Foxconn, which received nearly $2.9 billion to build a $10 billion liquid crystal display manufacturing plant in Racine County. State fiscal estimates say the Foxconn project will likely end up costing taxpayers about $4.5 billion in state tax breaks, grants, worker training, highway improvements, and other giveaways. Walker’s campaign did not receive a contribution from Foxconn executives as of the end of 2017.