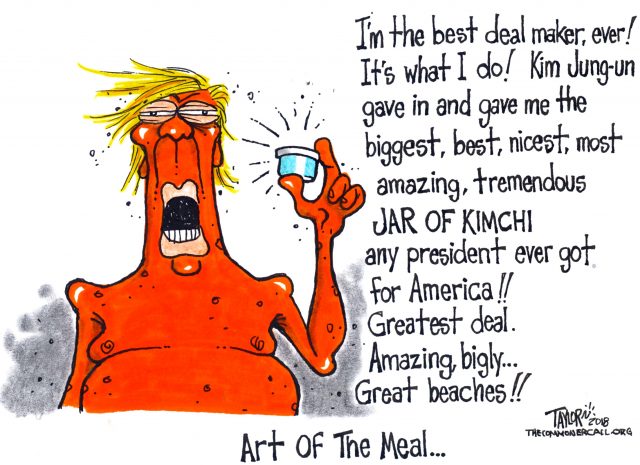 “I may be wrong, I mean I may stand before you in six months and say, ‘Hey I was wrong.’ I don’t know that I’ll ever admit that, but I’ll find some kind of an excuse.”

“It is truly remarkable how Donald Trump, being in such a strong negotiating position, has managed to get so little from the North Koreans.”

“Honestly, I think he’s going to do these things,” President Trump told reporters in Singapore on Tuesday night, after signing a page of loose declarations with Kim Jong Un. “I may stand before you in six months and say, ‘Hey, I was wrong.’ I don’t know that I’ll ever admit that, but I’ll find some kind of an excuse.” Perhaps no truer words were spoken at the Singapore summit, where Donald Trump, with a handshake and a shrug, opened a new phase in Asia that will eventually reveal him to be either a visionary who saw a path to peace where others did not or a dupe who squandered American credibility. He announced the opening of contact with North Korea with the bonhomie of a developer at a

“The Chinese are breathing a deep sigh of relief. They got what they most wanted. And, best of all, it came out of President Trump’s mouth.”

groundbreaking: he hailed an “excellent relationship” with a “talented” counterpart, and shooed away questions about timetables and the risk of default. He made no mention of Kim’s accelerated testing of missiles and nuclear weapons, or of his own threats, via Twitter last year, to “totally destroy” North Korea. He handed off the substantive work to his Cabinet, a team that is already sharply divided between Secretary of State Mike Pompeo, who has expressed high hopes for peace, and the national-security adviser, John Bolton, who has argued for years that North Korea cannot be trusted.

Compared with the expectations for the summit—or with previous agreements—there was much that Trump failed to get. There was no exchange of liaison offices and no pledge to improve human rights. …