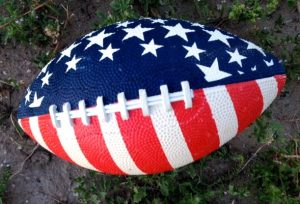 The NFL football player kneeling protest has from the get-go been cynically manipulated and leveraged by Donald Trump to stir racist animosity and jingoistic faux patriotism among his core supporters. The “taking a knee” by mostly black football players began as a peaceful protest by then-San Francisco 49ers quarterback Colin Kaepernick as a statement against racial injustice and the never-ending epidemic of police shootings and brutality against blacks across the nation.

Those who objected to the peaceful protests tried to reduce it to an issue of people doing their jobs and there being no room for protest — “go to work and do your job” — despite the fact that every stadium in the nation slathered in corporate logos was built with public funds. There are no private stadiums. These places are public spaces and an appropriate place for peaceful protest.

And never mind that the NFL and the War Department have been staging increasingly militaristic half time shows with taxpayer funds going to the already super wealthy NFL — again — using our publicly financed stadiums. That kind of paid political statement is, apparently, perfectly okay. And never mind that less than a decade ago professional football teams weren’t even on the field when the anthem was sung.

The NFL announced last week that players unwilling to stand during the national anthem would be expected to remain in the locker room. Any on-the field player who didn’t obediently stand would face a personal fine and their team would be penalized.

Trump couldn’t have been happier with the announcement and, of course — Trump being Trump — couldn’t help making the situation more extreme.

So now he wants to exile those who don’t play their role in manipulated public displays of “patriotism”?

Mandatory displays of obedience to authority and the nation are hallmarks of authoritarian regimes. Spectacles like sports are an important tool in the authoritarian’s toolbox for crafting and molding the public into an obedient, chanting, mindless mass. Any dissent is framed as treason. Hitler knew the power of sporting spectacles and that is why he pulled out all the militaristic trappings for the 1936 Munich Olympics. So when black American track star Jesse Owens earned four gold medals in those Olympics it was a public humiliation for Hitler and repudiation of all his rantings and Nazi lies about nordic superiority.

On the heels of the NFL announcement a short news story from 1934 about a German soccer team being banned by the Nazis for not giving a Nazi salute at a competition in France ricocheted around the internet this past week. The Nazis had made dissent illegal in 1933 and by 1934 a person could be arrested for not barking out “Sieg Heil” on demand. 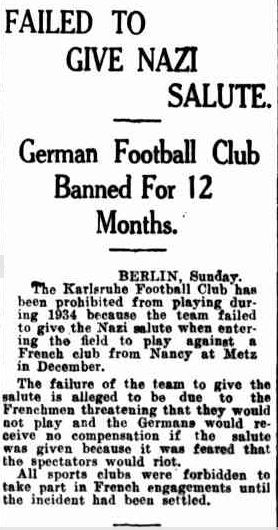 You can access an easier-to-read copy of the text here.

Donald Trump is one with the immature, emotionally brittle authoritarian mindset of all the petty tyrants and authoritarian narcissists of history. His demands for public loyalty and blind obedience and the silencing of dissent and individual expression is just getting started. The fact that the NFL — with profitable access to publicly-funded and supported stadiums — has so quickly fallen into line with Trump’s view of patriotism is beyond disappointing. It is a betrayal of the very American values of individuality we are supposed to celebrate in this nation. The fact that the NFL took such a cowardly, traitorous stance just days before Memorial Day — the national holiday we use to remember those who died defending American ideals of individual liberty —  is beyond ironic.

(Commoner Call photo by Mark L. taylor, 2017. Open source and free for non-derivative use with link to www.thecommonercall.org )