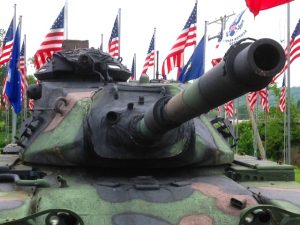 Top military, diplomatic, and political leaders have exposed, warned of, and condemned our runaway, unaudited military budgets for decades, to no avail.  (For many examples, see America’s War Machine: Vested Interests, Endless Conflicts by James McCartney, with Molly Sinclair McCartney.)  They usually come to the same desperate conclusion: that only organized citizens back in their Congressional Districts can make Congress stop this spending spree. Only us, Americans!

From 1953, when President Dwight D. Eisenhower delivered his “Cross of Iron” speech before the Convention of Newspaper Editors, to full-length addresses by President Obama’s Secretary of Defense, Robert Gates, the warnings about unrestrained military spending have not been addressed. The military budget—now at about a trillion dollars when you add up all costs—is spiraling out of control and draining the public budgets for rebuilding America’s public infrastructure and services. Now both major parties go along with uncritical rubber-stamping.

This is your money that could be used in your own community for jobs to repair and upgrade your public transit, roads, bridges, schools, drinking water/sewage systems, and other crumbling infrastructure and facilities.

Even the strict Pentagon budget of about $700 billion is now over fifty percent of the entire federal government’s operational budget for the other departments and agencies.

“Every gun that is made, every warship launched, every rocket fired, signifies in the final sense, a theft from those who hunger and are not fed, those who are cold and are not clothed. This world in arms is not spending money alone. It is spending the sweat of its laborers, the genius of its scientists, the hopes of its children.”

The oft-repeated phrase of “waste, fraud, and abuse” describing the Pentagon’s contracts with the giant defense industry rarely quantifies the toll of the outrageous waste of taxpayer dollars. Too many way-over-budget weapons systems that are not needed. Too many nuclear-equipped missiles, submarines, and bombers (referred to as the nuclear triad) are maintained at too-expensive levels.

Former generals, such as Presidents Gerald Ford and George H. W. Bush’s national security advisor Brent Scowcroft, have called for scrapping two of the triad. Doing so would still leave plenty of dispersed, globally destructive power to act as a sufficient nuclear deterrent. But the war machine of Lockheed Martin, General Dynamics, Boeing, Raytheon, and other big corporations is forever hungry for more and ever-bigger contracts.  While warmongering neocons and so-called think tanks like the American Enterprise Institute keep looking for enemies to exaggerate, the weapons industry lobbyists swarm over Capitol Hill demanding new military spending. The Trump administration is pushing a new arms race calling for spending at least $1.2 trillion over the next 30 years to allegedly upgrade existing nuclear weapons (see The Project on Government Oversight, “New Documents Raise Questions about Increased Nuclear Spending”).

Former Secretary of Defense Gates made pointed reference to the vastly excessive firepower of our too-many submarines and other delivery systems compared to all other countries in the world combined.

With Trump throwing more money at the DoD, the excessive Pentagon spending Gates described is much worse today. What to do?  Start with requiring a fully and authentically audited military budget, a provision already required by federal law since 1992.

The Pentagon has been in violation of that Congressional directive since 1992 but keeps promising that an audit is coming, to Congress’s Government Accountability Office (GAO).

At a House Armed Services Committee hearing in January, DoD Comptroller David Norquist promised an audit later this year. To illustrate his sincerity, Norquist said his office had already discovered two stunning situations: “The Army found 39 Black Hawk helicopters that had not been properly recorded in its property system. The Air Force identified 478 buildings and structures at 12 installations that were not in its real property system.”

The Comptroller did not go into the fraud and waste minefield that has lost taxpayers trillions of dollars since 1992. Not all this comes from the Pentagon. For years, the DoD has wanted to close dozens of costly, obsolete military bases in the U.S.  Various members of Congress, who view the military budget as a jobs program, have blocked these closures.

There is some light. Fifty-three members of the House of Representatives have signed on to H.R. 3079, which would reduce the budget of the Department (subject to emergency presidential waivers) by one-half of one percent if the Pentagon’s financial statements do not receive an audit OK by the GAO. H.R. 3079 is a stirring in the body politic, however weak the pulse.

Obtain a copy of H.R. 3079 and its named sponsors to see whether your Representative is on board. If not, demand to know why. All of Connecticut’s Representatives have ducked co-sponsoring this bill. [Editor’s Note: Democratic Rep. Ron Kind did not sign on to this bill. — Mark L. Taylor]

No such bill has been introduced in the Senate.

What more support do they need from the Pentagon than its own specialized audits, the GAO’s famous audits, and a quote from Secretary Gates right in Sec. 3 (10) of H.R. 3079 from a speech given on May 24, 2011:

“The current apparatus for managing people and money across the DOD enterprise is woefully inadequate. The agencies, field activities, joint headquarters, and support staff function of the department operate as a semi-feudal system—an amalgam of fiefdoms without centralized mechanisms to allocate resources, track expenditures and measure results relative to the department’s overall priorities.”

This legislation needs immediate public hearings in Congress. Full annual audits will reveal the costs of Empire. This is your money that could be used in your own community for jobs to repair and upgrade your public transit, roads, bridges, schools, drinking water/sewage systems, and other crumbling infrastructure and facilities.

At a recent gathering focused on auditing the military budget, citizens from 16 Congressional Districts agreed to organize that pressure to make Congress work for us. Stay tuned.