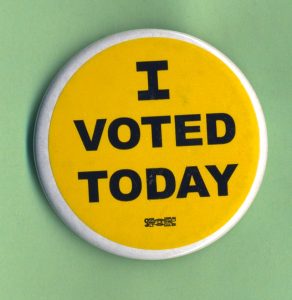 First, the stunner: Outside Omaha, Nebraska, progressive-populist, Kara Eastman, has beaten her DCCC-backed opponent by more than 500 votes. She is proudly pro-choice, running against a former Republican, who served one term in Congress as a Democrat, with a record of voting to restrict abortion rights, and she pulled off this upset with almost zero help from pro-choice groups.

The online lefty world — PCCC, Justice Democrats, etc. — campaigned hard for Eastman, who ran on Medicare for All and a broadly progressive platform. This is a real chance for the left to put their argument to the test — that the way to win some of these seats is not with a former Republican who sort of still is one, but rather with somebody who stands up for what she believes in. See you in November.

And some fun news: two members of the Democratic Socialists of America upset two veterans of the Pennsylvania statehouse — and one of the losers even scrambled to try to run a write-in campaign to get the Republican nomination at the last second. That ignominious effort appears to have failed. And my very own Uncle Archie won an uncontested primary to be the Democratic nominee in a heavily Republican statehouse district in rural PA. Go Archie!

Here’s a great New Yorker profile of Summer Lee, who will be the first African American socialist to represent southwestern Pennsylvania.

In Lancaster, Jess King, who was heavily featured in our long January story that launched our coverage of populist-v-establishment candidates, cruised to victory. Her well-funded opponent who had endorsements from across the state dropped out after redistricting to run in a different district — but then failed to make the ballot there.

John Fetterman, the biker-dude-looking populist, won the nomination to be lieutenant governor. If he wants, he can probably knock Pat Toomey out of the Senate in 2022. This guy’s fun. He beat an incumbent Lt. Gov., which has never happened in PA.

In Allentown, the closely watched three-way race between the Trump supporter, the EMILY’s List candidate and the Bernie candidate almost turned into a disaster for Democrats, as the Trump guy (John Morganelli) was leading for part of the night. The race shows that money can still beat organizing in the compressed window of a primary campaign. Susan Wild’s campaign was running on fumes with little in the way of infrastructure when EMILY’s List came in and dumped a million dollars in the final weeks to back her. No Labels, which funnels big money into races to back business friendly conservatives, pumped money in to back Morganelli. And Bernie Sanders came to Allentown to rally for Greg Edwards. Even though Edwards had the biggest canvassing operation by far, it’s not easy to canvass 700,000 people in a sprawling (and recently redrawn) district. But it’s easy to reach them with a million dollars. More on that race here.

It looks like Wild will beat Morganelli by about 1,000 votes and Edwards will finish third, about 3,000 behind. There are no women serving in Pennsylvania’s congressional delegation. None. So now maybe there’ll be a few.

Meanwhile, Henry Wallace’s grandson, Scott Wallace, who seems to be at least as progressive as his grandfather, and less nuts, won the PA first district primary. [Editor’s Note: I have no idea why Grim is making such a comment about FDR vice president and progressive reformer Henry Wallace, unless he is confusing him with a serial killer of the same name in the 1960’s. If so, sloppy background work. — Editor]

Some disappointments: in PA district five, lefties were pulling for Rich Lazer, who was up early in the night but slipped behind and never recovered. And Shavonnia Corbin-Johnson, a brilliant young candidate who was in foster care in York, Pennsylvania, learned to speak five languages, and rose through the ranks of the Obama administration, is trailing by a few hundred votes with more than 90 percent counted.

EMILY’s List came in very late for Corbin-Johnson with a $5,000 contribution and no independent expenditure, a stark contrast to the million dollars they dumped in for Wild. And so Wild squeaked by and Corbin-Johnson barely lost. (And they did nothing for Eastman and she won.)

In a special election, meanwhile, Helen Tai flipped another statehouse seat from red to blue.

And the real tragedy: The Senate, with a ton of Democratic support, plans to confirm Gina Haspel to be director of the CIA. I’ll be on Democracy Now tomorrow morning at 8 am to talk about this atrocity. And maybe primaries too.

This email grows by word of mouth. If you enjoy getting it, please forward this note to friends and tell them to sign up to start getting their own copy here.

I’m the Washington bureau chief at The Intercept, and I send this several times a week. If you want to contribute directly to help keep the thing running, you can do so here, though be warned a donation comes with no tote bags or extra premium content or anything. Or you can support it by buying a copy of Schoolhouse Wreck: The Betsy DeVos Story, Out of the Ooze: The Story of Dr. Tom Price or Wall Street’s White House, the first three books put out by Strong Arm Press, a small progressive publishing house I cofounded. See upcoming titles here.