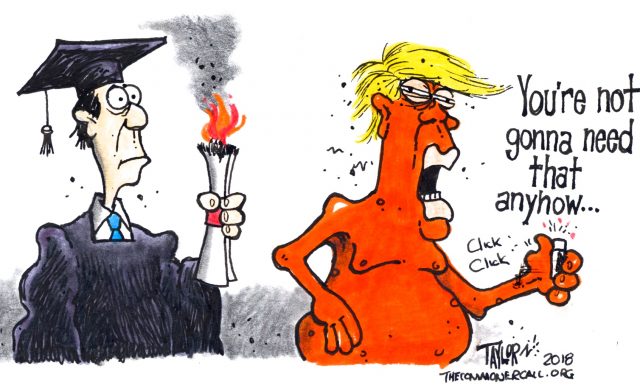 It’s a single line in an email:

Why did this bureaucratic-sounding announcement trigger a sheaf of critiques from consumer groups, California’s attorney general and at least two U.S. senators?

Because student loans just crossed the $1.5 trillion mark. They are the biggest category of borrowing after mortgages. And since 2012, when college students are mistreated or misled, the CFPB’s Student and Young Consumer division has been there to help:

Students and Young Consumers, until recently, was a parallel program office to the office of Financial Education, so this reorganization looks an awful lot like a demotion. Former and current staffers at the bureau, who declined to use their names for fear of losing their jobs, tell NPR they believe this is a move to weaken their ability to protect student loan borrowers and other young people.

A former senior CFPB attorney agrees. “This is an appalling step,” says Christopher Peterson, a law professor at the University of Utah and a former enforcement lawyer and special adviser at the CFPB. “This has been an office that’s been out there protecting consumers when student loan debt collectors, predatory schools, and other companies have been violating the law.” …

Mick Mulvaney, acting director of the Consumer Financial Protection Bureau (CFPB), announced Wednesday that the federal watchdog will effectively shutter its student loan division and shift its responsibilities to another office, a move that critics warn will lead to “open season on borrowers.”

The restructuring is part of Mulvaney master plan to, as the New York Times notes, “refocus the agency away from its consumer finance enforcement and rule-writing mission and more toward providing consumers with information about their legal rights”—in other words, to “defang” the CFPB, a long-time target of the acting director as well as President Donald Trump.

While a CFPB spokesman framed the shift as “modest,” insisting that agency personnel are “working on the same material as they were before,” career officials told the Timesthey fear it “will sidetrack a major enforcement case the agency is pursuing against Navient, the nation’s largest student loan collector.”

The move was also sharply criticized beyond the agency, by consumer advocates and at least one member of Congress.

Pointing out that “student loan debt is exploding,” Sen. Elizabeth Warren (D-Mass.)—one of the driving forces behind the creation of the CFPB—said that “it’s clear” the Trump administration “has declared war on students.”

“At a time when the number of and the size of student loans are spiraling out of control, it’s simply appalling to me that the administration is deciding to close the one office in the United States government that is exclusively focused on promoting fairness in student lending,” Christopher Peterson, a senior fellow at the Consumer Federation of America, told MarketWatch.

Challenging the CFPB’s new priorities under Mulvaney, Whitney Barkley-Denney, senior policy counsel with the Center for Responsible Lending, told the Associated Press, “Education alone cannot stop predatory behaviors on the part of for-profit schools and servicers, nor can it help hundreds of thousands of Americans in serious debt because of these practices.”

Wednesday’s announcement comes as Mulvaney, who also runs the Office of Management and Budget (OMB), faces mounting charges of corruption and calls for his resignation.

Dreams are dying amid the grim black ink of financial aid that doesn’t add up.

[Editor’s Note: This story is tragic on a personal level for the young people involved but it is also tragic on a societal level. Just think of the human capital and potential these students represent. We need their ideas, their intelligence and hard work in the future. We have already invested in them and now we are going to walk away from the promise they represent? Talk abut stupidity. Cut the tax giveaways to the rich and re-direct that money to these kids. As the GI Bill proved — investing in education is the single best thing a society can do for itself. — Mark L. Taylor]

Springtime at the school where I teach is usually a celebration of how far so many of our students have come. After years of hard work, often overcoming massive obstacles — poverty, violence, fractured families, inferior educational opportunities that did not prepare them for demanding and not always sympathetic high school teachers like me — graduation is supposed to be a moment of victory, a launching pad to greater success and a life full of possibility.

But more and more, I find those celebrations are tempered by a sudden cold slap from an indifferent world that cares little about the hard work of impoverished young people.

Kids euphoric one day about the colleges that want them, devastated the next when they realize an educational institution has been taunting them, insensitive to the realities of poverty.

These past few weeks, with commitment day looming, I’ve often found myself trying to console at least one — often three or four — students crying in my classroom or in the hallway outside. They are frustrated and hurt because they are coming to the conclusion that all that work was for nothing, that no matter their dedication, they cannot figure out how they will ever be able to pay for college.

When my wife and I filled out our first FAFSA more than a decade ago, we were surprised to discover that the income of two educators was above the threshold for receiving any need-based financial aid for our college-bound older daughter. It remained the case even a few years later when we had two daughters in college.

At the time, I understood the grim reality of limited resources. If there is only so much money available to subsidize college education, then it probably ought to go to those who need it most. But now, 12 years later, financial aid is covering less and less.

So you end up seeing what I saw last week — the financial statement of a student trying to become first in her family to attend college. Her federal financial aid determination was that her family contribution should be 0.

That’s ZERO. Nada. Not an unreasonable conclusion for a family living on less than $20,000 a year.

But that same student’s financial aid offer from the university she hoped to attend only accounted for about two-thirds of her tuition and expenses. Her family was somehow expected to come up with $5,000. Even the loans she was offered did not cover this.

Yes, some students still come out OK — those few who get a full ride based on merit and/or need and others who patch together enough scholarships and loans to get a degree without initiating a lifetime of debt. But that ought not obscure the very real crisis that is playing out right now, this week, in the halls outside my classroom and in other high schools across the country. …