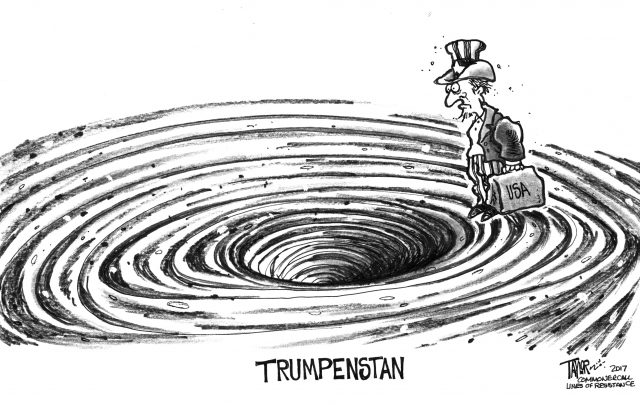 (Editor’s Note: This article came out over a year ago but presents the clearest explanation for the non-stop, escalating chaos of the Trump shitstorm. As the headline above notes, ‘ its too chaotic to simply be chaos’. — Mark L. Taylor)

On March 12, 2014, the Russian author Natan Dubovitsky published a short story titled “Without Sky” in the literary journal Russian Pioneer. In the story, which takes place in a dystopian future, a man recalls the events of the fifth World War, decades earlier. He describes these events as the first “non-linear war.” Instead of fighting in a traditional sense, as a battle between two sides, World War V was a more byzantine conflict. Multiple nations all fought one another at once and could switch sides at any time. Simplistic approaches to victory were seen as obsolete, as armed conflict itself was just one phase of a longer, more insidious “process.” Some even joined conflicts to facilitate their own defeat. Around the midpoint of the story, Dubovitsky writes that the complexity of the war was only “realized and analyzed later by historians and economists.”

The effect is a permanent state of disorder: a de-stabilized media, an exasperated citizenry, and a fractured opposition, divided and pulled into mudslinging sideshows.

Natan Dubovitsky, as many Russians know, is the literary pseudonym of Vladislav Surkov, Putin’s longtime political technologist and a chief architect of the Kremlin propaganda machine. Just days after “Without Sky” was published, Russia carried out a masterstroke of the “non-linear war” described in the story—the annexation of Crimea. In the weeks leading up to the March referendums in Crimea, in which Crimea’s parliament and local population voted on whether to join the Russian Federation, Surkov and the Kremlin carefully orchestrated an elaborate political spectacle to create the appearance of strong support for the annexation. This spectacle is known in Russian as dramaturgia, or theater craft.

Heavily armed “little green men” that Putin claimed were local self-defense units began popping up at key outposts on the peninsula. The Night Wolves, a notorious Russian motorcycle gang, rumbled into Crimea to join forces with Cossacks and other separatists in pro-Russian demonstrations. The referendums themselves, shady, black-box affairs, nevertheless gave the impression of widespread enthusiasm for joining Russia. It was an intoxicating swirl of political actors who all seemed to be expressing a furious loyalty to Russia.

But what looked like a vibrant coalition of support for Russia’s annexation was really just the booming sound and fury of Kremlin dramaturgia. Moscow, with puppet master Surkov largely at the helm, was choreographing the entire thing, directing its patriotic ensemble in order to confuse and misdirect the countries and international organizations that might otherwise have intervened against an act of war. At home, the effect was to warp Russians’ sense of reality by clouding their vision and rousing their nationalism.

Everything happening in Crimea and eastern Ukraine passed through the Kremlin’s prism, so that by the time any news reached Europeans, Americans, or Russia’s own citizens, it had been transformed into falsehoods supporting an alternative reality favorable to Russia. This was the futuristic non-linear warfare Surkov had slyly telegraphed in his dystopian story. It is a strategy, he has said, that uses “conflict to create a constant state of destabilized perception, in order to manage and control.”

The Trump team, both during its transition to power at the end of 2016 and in the early stages of its administration, can come across as an indecipherable swirl of contradictions, conflicting reports, and apparent hypocrisies. This can seem, at first blush, like the obvious result of an inexperienced, seat-of-the-pants president and a leadership style that favors flash over substance. …

(Commoner Call cartoon by Makr L. Taylor, 2017. Open source and free for non-deriviative use with link to www.thecommonercall.org )