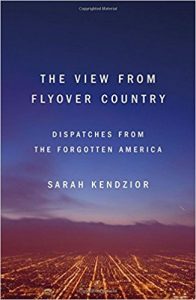 Writer and researcher Sarah Kendzior’s new book is a series of essays that she wrote from 2012 through 2014 that ultimately predicted the rise of today’s politics, government institution bashing, paranoia — and the possibility of a President Donald Trump.

In a Tuesday interview with “Late Night” host Seth Meyers, Kendzior explained that despite understanding the possibilities of Trump, she finds no solace in being right.

“When I’m in demand, when my areas of expertise are in demand, then you know America is in bad shape,” she explained. She went on to explain what she calls “parachute journalists,” who jump into an area and try to uncover and understand an entire culture for a few weeks and then race out. For those who live and understand America outside of New York or the Washington Beltway, however, the rise of these ideologies was completely predictable.

She went on to explain how “frustrating” it is “because people are genuinely suffering,” with the GOP’s policies. She noted that it isn’t limited to St. Louis, where she is from, but also in places where “anybody treats your community with that lover superficiality, with that lack of concern.” She described it as being like The Hunger Games. Meanwhile, with the failure of local newspapers and acquisition of local news stations by conservative company Sinclair Broadcasting, the fear is that local news will not be covered.

“Trump likes to bandy that phrase about, ‘forgotten people,’” she recalled. “I mean, he’s — you know, I think a better phrase would be ‘neglected people’ because that puts some accountability on public officials. You know, they have a job. Public officials are here to serve us whether they believe so or not. And they’ve been negligent. I think that’s, you know, somewhat true of the [Barack] Obama administration. It’s certainly true of the Trump administration. They’re negligent with malice, with malicious intent. And so this idea that Trump somehow speaks for forgotten America or speaks for people in places like where I live is just — it’s absolutely ludicrous.”

She also discussed a portion of her book where she notes, in part, the recession from 2007 and 2008 hit Middle America particularly hard and that Washington manufactured a so-called “recovery” to pretend everything was better than it was. Trump understood it and was able to capitalize on it. …