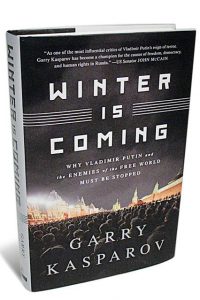 “It’s a tragedy that the free world always refuses to learn from past mistakes where dictators and would-be dictators are concerned.

“The autocrats, in contrast, are eager students of their predecessors. The make careful study of how to gradually remove rights without allowing rebellion, how to crush dissent and hold sham elections while keeping favorable travel and trade status in the West, and how to talk peace while waging war. The motives of dictators vary, it is true — communism, fascism, conquest, larceny – but the drive for total control never changes and their methods are painfully repetitive. In contrast, the idea that free nations have a responsibility to defend innocents from murder and oppression is repeatedly allowed to approach extinction. We can only revive it when the latest crisis has already occurred.”