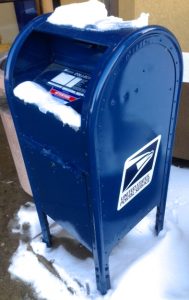 The Friday (4/13) broadcast of the public radio show “MarketPlace” included a report on the current controversy about the rates charged by the United States Postal Service for delivering Amazon orders. In a backhanded attack on the Washington Post for its excellent reporting on the Trump-Russia scandal, Donald Trump has been attacking Amazon for taking advantage of lower USPS rates. Both Amazon and the Washington Post are owned by many-multi-billionaire Jeff Bezos.

Putting aside the Amazon issue, what I found troubling about the MarketPlace report was that it completely blew past the primary reason for the USPS financial crisis, which was a bonkers congressional demand to completely pre-fund all future retirement and health care obligations. A demand by the way, that conservatives would howl bloody murder about if it were applied to private corporations. The MarketPlace report would be like reporting that a family declared bankruptcy while ignoring the fact that the family had been hit with hundreds of thousands of dollars in crisis health care expenses (which is the reason for half of all personal bankruptcies in America, BTW).

Unfortunately, this kind of selective reporting on problems in government agencies while ignoring the role of budget cuts and legislative shenanigans that hamstring agencies to such an extent that they don’t have the resources to meet their public service mission is the norm. This, of course, then feeds the radical right’s grand lie that the “government-can’t-do-anything-right” drumbeat.

The support provided by the USPS to the overall economy is an illustration of the truth that private success depends upon the public; be that the postal service, the legal system, highways, research, police and fire protection and the public education that provides a well-educated workforce. Time and after time, when it comes to covering government programs and agencies, that is the “rest of the story” the media consistentl ignores.

I wrote a letter to MarketPlace about their fail, urging them to tell their listeners the “rest of the story”. We’ll see. Meanwhile the story below will give you that missing information.

(Commoner Call story and photo by Mark L. Taylor, 2018. Open source and free for non-derivative use with link to www.thecommonercall.org )

When It Comes To The Postal Service Economic Crisis, Be Very Careful What You Assume

Well, that’s what the U.S. Postal Service’s requirement to prefund its long-term pension and healthcare liabilities is like. The Postal Service is required to pay the full estimate of its liabilities, currently estimated at nearly $404 billion, even as that estimate moves around and is based on assumptions that are highly uncertain and can frequently change over the life of the liability. Our recent white paper, Considerations in Structuring Estimated Liabilities, evaluates these assumptions and other considerations and shows the Postal Service is closer to being fully funded, or potentially overfunded, when certain assumptions are reasonably adjusted or considered.

First, let’s look at current funding levels. The Postal Service has set-aside cash totals of more than $335 billion for its pensions and retiree healthcare, exceeding 83 percent of estimated future payouts. Its pension plans are nearly completely funded and its retiree healthcare liability is 50 percent funded – much better than the rest of the federal government. But getting to this well-funded position has been painful. The Postal Service’s $15 billion debt is a direct result of the mandate that it must pay about $5.6 billion a year for 10 years to prefund the retiree healthcare plan. This requirement has deprived the Postal Service of the opportunity to invest in capital projects and research and development.

As things stand now, retiree healthcare, pensions, and workers’ compensation are unfunded by about $86.6 billion. But our paper says any discussion of unfunded liabilities should take into consideration assets that could be used to satisfy the liabilities, such as real estate. The Postal Service’s real estate assets have a net book value of $13.2 billion. But fair market value of these properties is estimated as high as $85 billion. Neither is factored into the Postal Service’s ability to meet future liabilities.

In addition, the liabilities are not exact or static amounts and they require certain assumptions, such as interest rates and demographic inputs, to estimate the future costs of these programs. For example, interest rates are at historic lows. Even slightly higher interest rate assumptions would reduce or eliminate the estimated liabilities.

Our paper details how different assumptions and considerations would affect the liabilities. Basically, if the Postal Service’s real estate assets were considered and one other assumption adjusted, the long-term liabilities would be overfunded.

Share your thoughts on our paper. Do you agree or disagree with the overall premise of the paper or have additional insight to share?