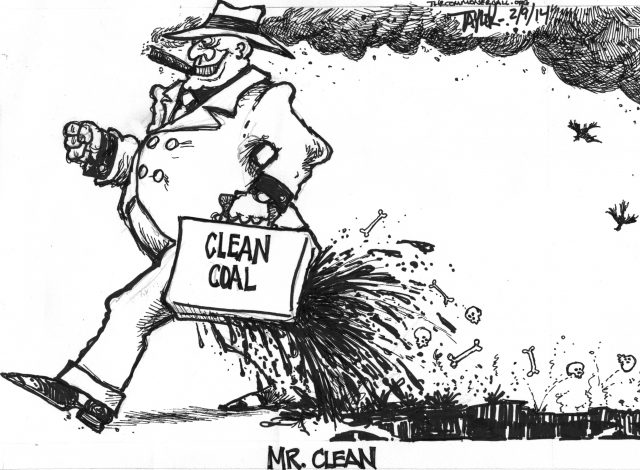 Don Blankenship isn’t your typical extermination-camp-type mass murderer, he’s a lifelong coal executive. Mostly his activities kill people slowly, in their natural habitat, or what used to be a natural habitat before coal mining started destroying mountains, rivers, aquifers, and other life-sustaining ecosystems.

None of this is much of an issue in the Republican primary race for the West Virginia Senate nomination. The primary is scheduled for May 8. As of April 5, Blankenship was rising in the polls, now standing second with 27% in a six-way race, nine points higher than a month ago. The leader has 29%, down four points over the past month (down 13 since February). In 2016 Donald Trump won 68% of the vote in West Virginia. In 2014 the Republican Senate candidate won 62%. Blankenship is self-funding his campaign and has reportedly already spent millions. Blankenship spokesman Greg Thomas framed the situation carefully:

While we don’t have much confidence in other people’s polls, it is not surprising that more and more West Virginians would be supporting Don Blankenship. Don’s message of being a proven job creator and a conservative leader in West Virginia who will fight against the D.C. establishment is being received well everywhere we go….

The more people know about Don, the more they like him. We are doing everything we can to make sure people hear our positive message.

Reality is a variable, especially in politics. Even in West Virginia, running as a former CEO convicted of conspiring to cut safety measures, directly leading to 29 dead miners, probably is not the best image to project, even though it’s precisely true. But that was back in 2010, back before the Trump era blossomed upon us, back when the US government actually tried to prosecute people who killed their employees, back when Rolling Stone described Blankenship with refreshing venom:

You might not know that he grew up in the coal fields of West Virginia, received an accounting degree from a local college, and, through a combination of luck, hard work and coldblooded ruthlessness, transformed himself into the embodiment of everything that’s wrong with the business and politics of energy in America today — a man who pursues naked self-interest and calls it patriotism, who buys judges like cheap hookers, treats workers like dogs, blasts mountains to get at a few inches of coal and uses his money and influence to ensure that America remains enslaved to the 19th-century idea that burning coal equals progress. And for this, he earns $18 million a year — making him the highest-paid CEO in the coal industry — and flies off to vacations on the French Riviera.

In 2010, Blankenship was in his tenth year as CEO and chairman of the Massey Energy Company, the largest coal company in Central Appalachia and one of the largest in the US (sold in 2011 to Alpha Natural Resources). Under Blankenship’s leadership, Massey was notorious for valuing productivity over safety. In October 2000, a Massey subsidiary unleashed some 300 million gallons of slurry laced with mercury and arsenic, killing all aquatic life nearby and polluting hundreds of miles of downstream waterways; the Bush administration cut short the investigation and Labor Secretary Elaine Chao (Mitch McConnell’s wife) assessed a $5,600 fine on Massey (which also spent about $50 million on cleanup and local fines).

In January 2006, safety violations led to a mine fire that killed two, and Massey’s culpability led to a settlement (over the objections of the widows) in which Massey paid $4.2 million in criminal and civil penalties, then the largest settlement in the coal industry’s history (but no one was prosecuted). In February 2006, a bulldozer fire killed the operator, leading Massey to plead guilty to 10 criminal charges in a plea deal that cost Massey $2.5 million, but again prosecuted no one. In 2008, Massey paid $20 million to settle thousands of clean water violations with potential total fines of $2.4 billion, which is a pretty good incentive for the company to go on polluting. In 2009, the US cited Massey for 495 violations at the company’s Upper Big Branch coal mine and proposed fines totaling $911,802.

Mass murderers are not known for their repentance or humility or integrity or sense of accountability, but that won’t make him stand out in the Senate, if he gets there.

On April 5, 2010, Massey safety failures led directly to an explosion that killed 29 miners (out of 31), the worst US mine catastrophe since 1970, which became known as the Upper Big Branch Mine Disaster. The US assessed $10.8 million in penalties for 369 citations issued to Massey (which was cited more than 1,100 times for the same mine over the previous three years). On December 3, 2010, Blankenship resigned from Massey, three days before the mine safety report was issued. A year after the explosion, a state investigation fixed the blame on Massey leadership, up to and including Blankenship. On November 13, 2014, a federal grand jury indicted Blankenship on several felony charges of conspiring to violate federal safety standards, lying, and security fraud. In December 2015, a federal jury acquitted Blankenship of the felony charges, but convicted him of a misdemeanor charge of conspiring to violate safety standards. A federal judge ordered the maximum sentence for the conviction, one year in prison and a $250,000 fine. Blankenship appealed and lost, entered prison, appealed again and lost. His final appeal to the US Supreme Court was still pending when he was released on May 10, 2017, after serving his year. On October 10, 2017, the Supreme Court refused to hear Blankenship’s appeal. Blankenship responded to the court’s decision with a prepared statement that blamed the court system with a classic Republican trope of irrelevance and arrogance:

Our court system is so tangled up trying to decide whether illegal is illegal and whether males can use female public restrooms that they have no time to concern themselves with whether American citizens have received a fair trial. The judicial system is broken top to bottom and it’s not fixable.

Currently, still playing the victim, Blankenship is claiming his trial was tainted by prosecutorial misconduct and that “the actions of the prosecution are being reviewed by the Department of Justice Office of Professional Responsibility.” The Justice Department has neither confirmed nor denied Blankenship’s claim. Blankenship contends that the fatal mine explosion was the fault of federal prosecutors and that his prosecution was part of an Obama administration conspiracy to demonize the coal industry. Blankenship also denies climate change.

He wouldn’t be alone

Mass murderers are not known for their repentance or humility or integrity or sense of accountability, but that won’t make him stand out in the Senate, if he gets there. He probably wouldn’t even be the first actual mass murderer in the Senate, but he might be the most blatant and successful, at least by the numbers.

When you stop, rational and detached, to think about the Senate, you realize that there’s not one senator who’s not complicit in mass murder more widespread than Blankenship perhaps even dreamed of. There is not a single US senator who’s not a war criminal, and there’s also probably not a single senator who will be charged for war crimes, much less tried for and convicted of war crimes. Punishing a US senator for culpability in any of the American war crimes of recent decades is all but unimaginable.

Of all the members of the House and Senate since 2001, only Democratic congresswoman Barbara Lee of Oakland has any right to a presumption of innocence. And she may even be actually innocent of even the most tangential participation in our government’s daily execution of war crimes and crimes against humanity. But that innocence, that pure innocence, is hard to imagine. Barbara Lee sits in Congress, and she votes for bills that may seem beneficial or benign. And how many are truly beneficial or benign? The war economy is woven into the national fabric so pervasively that almost every act directly or indirectly facilitates our killing and our preparations to kill. The fine print in a bill to feed children in America (unlikely as that has become of late) also makes it possible to kill other children in distant places where they die anonymously and alone for the sake of our national security. Somehow.

Blankenship’s rise is reportedly raising concern among Republican incumbents, who profess to be shocked – shocked – to find Republican values so vividly personified. If he gets the nomination, Blankenship will be running against Democrat Joe Manchin, who said after the mine killings that Blankenship had blood on his hands. That hardly makes him unqualified to sit in “the world’s greatest deliberative body” (self-styled) which remains all too content not to talk about its bloody hands all over Iraq and Yemen, while giving less than lip service to its hands-off approach to the deadly suffering of Americans in Puerto Rico and Flint, Michigan.

(Commoner Call cartoon by Mark L. Taylor, 2018. Open source and free to use with link to www.thecommonercall.org)