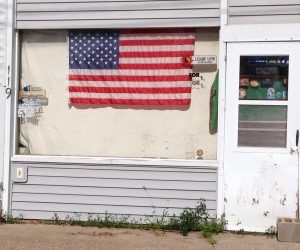 “You got a choice to make, man. You could go straight on to heaven. Or you could turn right, into that.”

We are in Los Angeles, in the heart of one of America’s wealthiest cities, and General Dogon, dressed in black, is our tour guide. Alongside him strolls another tall man, grey-haired and sprucely decked out in jeans and suit jacket. Professor Philip Alston is an Australian academic with a formal title: UN special rapporteur on extreme poverty and human rights.

General Dogon, himself a veteran of these Skid Row streets, strides along, stepping over a dead rat without comment and skirting round a body wrapped in a worn orange blanket lying on the sidewalk.

The two men carry on for block after block after block of tatty tents and improvised tarpaulin shelters. Men and women are gathered outside the structures, squatting or sleeping, some in groups, most alone like extras in a low-budget dystopian movie.

We come to an intersection, which is when General Dogon stops and presents his guest with the choice. He points straight ahead to the end of the street, where the glistening skyscrapers of downtown LA rise up in a promise of divine riches.

Then he turns to the right, revealing the “black power” tattoo on his neck, and leads our gaze back into Skid Row bang in the center of LA’s downtown. That way lies 50 blocks of concentrated human humiliation. A nightmare in plain view, in the city of dreams.

“I was feeling pretty depressed. The endless drumbeat of horror stories. At a certain point you do wonder what can anyone do about this, let alone me.” — UN special rapporteur on extreme poverty Philip Alston

So begins a two-week journey into the dark side of the American Dream. The spotlight of the UN monitor, an independent arbiter of human rights standards across the globe, has fallen on this occasion on the US, culminating on Friday with the release of his initial report in Washington.

His fact-finding mission into the richest nation the world has ever known has led him to investigate the tragedy at its core: the 41 million people who officially live in poverty.

Of those, nine million have zero cash income – they do not receive a cent in sustenance.

Alston’s epic journey has taken him from coast to coast, deprivation to deprivation. Starting in LA and San Francisco, sweeping through the Deep South, traveling on to the colonial stain of Puerto Rico then back to the stricken coal country of West Virginia, he has explored the collateral damage of America’s reliance on private enterprise to the exclusion of public help.

The Guardian had unprecedented access to the UN envoy, following him as he crossed the country, attending all his main stops and witnessing the extreme poverty he is investigating firsthand.

Think of it as payback time. As the UN special rapporteur himself put it: “Washington is very keen for me to point out the poverty and human rights failings in other countries. This time I’m in the US.”

The tour comes at a critical moment for America and the world. It began on the day that Republicans in the US Senate voted for sweeping tax cuts that will deliver a bonanza for the super wealthy while in time raising taxes on many lower-income families. The changes will exacerbate wealth inequality that is already the most extreme in any industrialized nation, with three men – Bill Gates, Jeff Bezos and Warren Buffet – owning as much as half of the entire American people.

A few days into the UN visit, Republican leaders took a giant leap further. They announced plans to slash key social programs in what amounts to an assault on the already threadbare welfare state. …