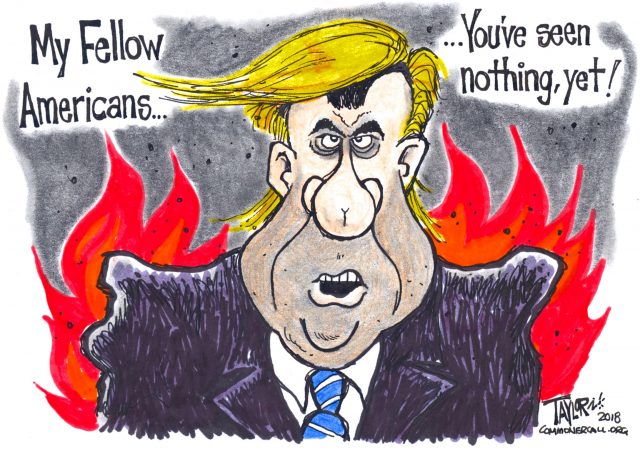 Fair warning from the Under World…

Something changed last weekend, did it not?

The firing of Andrew McCabe. The statement by Trump lawyer John Dowd to The Daily Beast’s Betsy Woodruff that Robert Mueller should end his probe soon. Donald Trump’s tweetstorm just after that, his first tweets mentioning Mueller by name along with promises by aides that more attacks are on the way. The amped-up speculation that Trump will fire Jeff Sessions and replace him with someone who hasn’t recused himself so that someone can fire Mueller.

Somewhere in there also came an official reassurance by Trump lawyer Ty Cobb that the president has no plans to fire Mueller. Right. That’s about as reassuring as the NCAA promising that all that cheating is a thing of the past.

The temperature’s rising. The New York Times’ Maggie Haberman reportsthat this president feels he really knows how to do this job now, and from here on in we’re going to see Trump unchained. So the Trump we’ve been seeing has been chained? God help us.

We will be in the midst of a major constitutional crisis

Where are we headed? If Trump fires Sessions and brings in whomever, and that person does fire Mueller, we will be in the midst of a major constitutional crisis. The standard line is “the worst since Watergate.” But this one is looking like it could be far worse than Watergate. Why?

Because in 1973, we had a Republican Party with some independent-minded lawmakers in it. Here is The New York Times article covering the Saturday Night Massacre in October 1973. The third paragraph states: “Senior members of both parties in the House of Representatives were reported to be seriously discussing impeachment of the president because of his refusal to obey an order by the United States Court of Appeals that he turn over to the courts tape recordings of conversations about the Watergate case, and because of Mr. Nixon’s dismissal of Mr. [Archibald] Cox.”

If Trump fires Mueller, could Haberman and her White House-based Times colleagues write that same sentence today? I very much doubt it.

Every time there’s a Mueller firing scare—and this is not the first; last June, Trump ordered White House counsel Don McGahn to fire Mueller, but McGahn refused and Trump backed off—a few Republicans, to their credit, do step forward and say he’d better not. Lindsey Graham. Jeff Flake. And this time around, Trey Gowdy. And now Bob Corker is talking tough, too. Great. That’s four. Out of 289.

They were semi-joined by Speaker Paul Ryan, sort of, who had a spokeswoman tell the Times on Monday that “Mr. Mueller and his team should be able to do their job.” Not exactly a bold affirmation. But a lot better than his Senate counterpart. From the same Times story: “Senator Mitch McConnell of Kentucky had no comment, as did a number of other top Senate Republicans.”

That McConnell, the leader of the United States Senate, and other “top” Republicans are hiding behind “no comment” here is disturbing and telling. They don’t want to say anything that they might be held to when the dark day comes. …

UNTIL HE WAS stripped of his top-secret security clearance in February, presidential adviser Jared Kushner was known around the White House as one of the most voracious readers of the President’s Daily Brief, a highly classified rundown of the latest intelligence intended only for the president and his closest advisers.

Kushner, who had been tasked with bringing about a deal between Israel and Palestine, was particularly engaged by information about the Middle East, according to a former White House official and a former U.S. intelligence professional.

The Saudi figures named in the President’s Daily Brief were among those rounded up; at least one was reportedly tortured.

In June, Saudi prince Mohammed bin Salman ousted his cousin, then-Crown Prince Mohammed bin Nayef, and took his place as next in line to the throne, upending the established line of succession. In the months that followed, the President’s Daily Brief contained information on Saudi Arabia’s evolving political situation, including a handful of names of royal family members opposed to the crown prince’s power grab, according to the former White House official and two U.S. government officials with knowledge of the report. Like many others interviewed for this story, they declined to be identified because they were not authorized to speak about sensitive matters to the press.

In late October, Jared Kushner made an unannounced trip to Riyadh, catching some intelligence officials off guard. “The two princes are said to have stayed up until nearly 4 a.m. several nights, swapping stories and planning strategy,” the Washington Post’s David Ignatius reported at the time.

What exactly Kushner and the Saudi royal talked about in Riyadh may be known only to them, but after the meeting, Crown Prince Mohammed told confidants that Kushner had discussed the names of Saudis disloyal to the crown prince, according to three sources who have been in contact with members of the Saudi and Emirati royal families since the crackdown. Kushner, through his attorney’s spokesperson, denies having done so.

“Some questions by the media are so obviously false and ridiculous that they merit no response. This is one. The Intercept should know better,” said Peter Mirijanian, a spokesperson for Kushner’s lawyer Abbe Lowell.

On November 4, a week after Kushner returned to the U.S., the crown prince, known in official Washington by his initials MBS, launched what he called an anti-corruption crackdown. The Saudi government arrested dozens of members of the Saudi royal family and imprisoned them in the Ritz-Carlton Riyadh, which was first reported in English by The Intercept. …