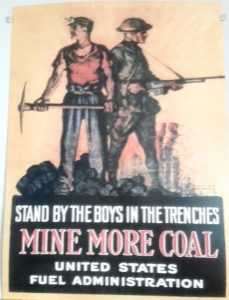 In the late 1800s, traveling preacher Robert Sheffey cursed the town of Ivanhoe, Virginia, after witnessing what one female resident describes as “houses of ill repute, fighting, drunkenness, and a rejection of his ministry by the townspeople.” Legend has it that Sheffey condemned the sinful town to sink into the earth and be consumed by the pits of hell.

“Whether you believe in it or not, after that happened, we lost everything,” says the same Ivanhoe resident in the short documentary The Curse and the Jubilee. “We lost the rock quarry; we lost the railroads; we lost the mines; we lost our stores. We have nothing.” Today, Ivanhoe is even plagued by sinkholes—multiple houses have disappeared entirely into the earth.

Ivete Lucas and Patrick Bresnan’s arresting film is an intimate portrait of a once-prosperous town in a forgotten corner of America. Like many former mining communities, Ivanhoe has been decimated by industrial abandonment. Taking an observational approach, The Curse and the Jubilee introduces the town’s remaining residents, who pride themselves on their strong constitutions despite the fact that most live well below the poverty line. “A weak person would never survive living around here,” says a local mother. “There are no slackers in Ivanhoe. We have a strong backbone because we’ve been put down so much….We are not trash.”

“Many of the men in the town were deeply hurt because the mines were the only work they had known,” said Bresnan told The Atlantic. “Jobs were scarce and the women of the town had to pull together and try to find a new path to prosperity. We were all moved by the strength of the women in the community.

Bresnan first visited Ivanhoe in 2005 as a volunteer with the Ivanhoe Civic League, an organization run by local women that facilitates community rebuilding projects. “Unlike many other rural Appalachian communities, Ivanhoe became open to outsiders through exchanges with volunteer groups,” said Bresnan. He was invited back to film the town’s annual Jubilee event, a fourth of July celebration that provides residents a chance to let loose and triumph over the scars left by the mines, racism, poverty, and economic strife.

However, there was one encounter that rattled the filmmaking team. “When Ivete [Bresnan’s co-director] and cinematographer Keith Wilson were recording the fairgrounds being prepared for the concert,” said Bresnan, “a KKK grand wizard drove up to them and just started talking to the camera. Keith, being a gay man from Georgia, and Ivete, an immigrant from Mexico, were completely caught off guard. They were scared.”

In the film, the Klansman says to the camera, “God gave us the greatest real estate on earth: America.”

“We were very interested in the fact that a town that had lost so much economic opportunity could have such enthusiasm for America and the fourth of July,” said Bresnan. “Their jobs had been stripped away by companies like Union Carbide, which had begun importing cheaper carbide from Bangladesh and left large-scale environmental damage for the town to deal with. There is incredible resilience and a deep love of America in small rural towns, even though the ideals of capitalism have failed them.”

Link to Story and 25-Minute Video