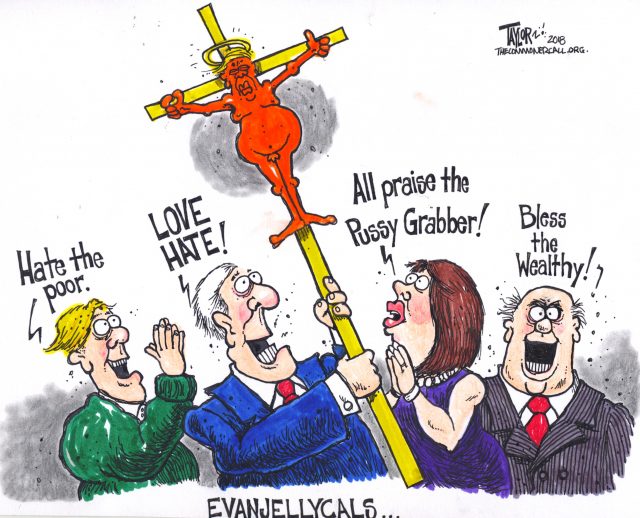 By Michael Gerson
The Atlantic (April 2018)

One of the most extraordinary things about our current politics—really, one of the most extraordinary developments of recent political history—is the loyal adherence of religious conservatives to Donald Trump. The president won four-fifths of the votes of white evangelical Christians. This was a higher level of support than either Ronald Reagan or George W. Bush, an outspoken evangelical himself, ever received.

Trump’s background and beliefs could hardly be more incompatible with traditional Christian models of life and leadership. Trump’s past political stances (he once supported the right to partial-birth abortion), his character (he has bragged about sexually assaulting women), and even his language (he introduced the words pussy and shithole into presidential discourse) would more naturally lead religious conservatives toward exorcism than alliance. This is a man who has cruelly publicized his infidelities, made disturbing sexual comments about his elder daughter, and boasted about the size of his penis on the debate stage. His lawyer reportedly arranged a $130,000 payment to a porn star to dissuade her from disclosing an alleged affair. Yet religious conservatives who once blanched at PG-13 public standards now yawn at such NC-17 maneuvers. We are a long way from The Book of Virtues.

Trump supporters tend to dismiss moral scruples about his behavior as squeamishness over the president’s “style.” But the problem is the distinctly non-Christian substance of his values. Trump’s unapologetic materialism—his equation of financial and social success with human achievement and worth—is a negation of Christian teaching. His tribalism and hatred for “the other” stand in direct opposition to Jesus’s radical ethic of neighbor love. Trump’s strength-worship and contempt for “losers” smack more of Nietzsche than of Christ. Blessed are the proud. Blessed are the ruthless. Blessed are the shameless. Blessed are those who hunger and thirst after fame.

And yet, a credible case can be made that evangelical votes were a decisive factor in Trump’s improbable victory. Trump himself certainly acts as if he believes they were. Many individuals, causes, and groups that Trump pledged to champion have been swiftly sidelined or sacrificed during Trump’s brief presidency. The administration’s outreach to white evangelicals, however, has been utterly consistent. …

Read the Rest and 53-Minute Audio

A study published in the journal Neuropsychologia has shown that religious fundamentalism is, in part, the result of a functional impairment in a brain region known as the prefrontal cortex. The findings suggest that damage to particular areas of the prefrontal cortex indirectly promotes religious fundamentalism by diminishing cognitive flexibility and openness—a psychology term that describes a personality trait which involves dimensions like curiosity, creativity, and open-mindedness.

Whether from brain trauma, a psychological disorder, a drug or alcohol addiction, or simply a particular genetic profile—can make an individual susceptible to religious fundamentalism.

Religious beliefs can be thought of as socially transmitted mental representations that consist of supernatural events and entities assumed to be real. Religious beliefs differ from empirical beliefs, which are based on how the world appears to be and are updated as new evidence accumulates or when new theories with better predictive power emerge. On the other hand, religious beliefs are not usually updated in response to new evidence or scientific explanations, and are therefore strongly associated with conservatism. They are fixed and rigid, which helps promote predictability and coherence to the rules of society among individuals within the group.

Religious fundamentalism refers to an ideology that emphasizes traditional religious texts and rituals and discourages progressive thinking about religion and social issues. Fundamentalist groups generally oppose anything that questions or challenges their beliefs or way of life. For this reason, they are often aggressive towards anyone who does not share their specific set of supernatural beliefs, and towards science, as these things are seen as existential threats to their entire worldview.

Since religious beliefs play a massive role in driving and influencing human behavior throughout the world, it is important to understand the phenomenon of religious fundamentalism from a psychological and neurological perspective. …