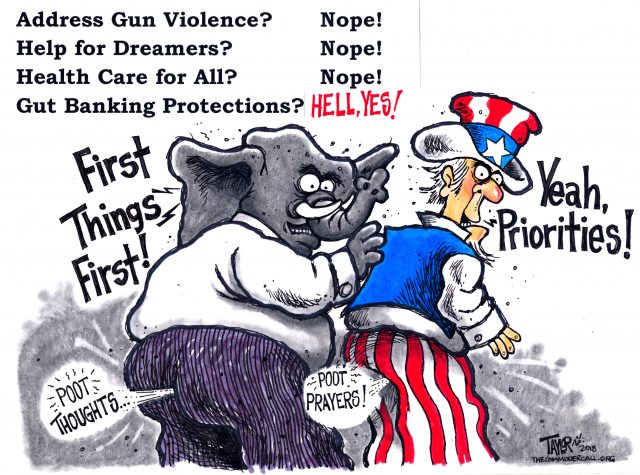 Cooperation between Republicans and Democrats has become something of a rarity in today’s polarized political environment—except when it comes to a select handful of objectives, like enriching Wall Street banks.

In a Twitter thread on Friday, Sen. Elizabeth Warren (D-Mass.) called attention to a massive bank deregulation bill (S.2155) that could reach the Senate floor for a final vote next week, and highlighted the fact that a dozen Democrats are providing crucial support for the measure.

“It’s time for the rest of us to fight back and demand that Washington work for us, not the big bank lobbyists.”

If passed, the legislation—derisively labeled “The Bank Lobbyist Act” by Warren and other critics—would make it more difficult to combat racial discrimination by big banks, provide regulatory relief for more than two dozen of the nation’s large financial institutions, and eliminate many consumer protections put into place after the 2008 financial crisis.

Elizabeth Warren. The Senate – with the support of some Democrats – is set to start debate on a bill to roll back regulations on the same big banks we bailed out a few years ago. If we lose the final vote next week, we’ll be paving the way for the next big crash. https://www.politico.com/story/2018/02/20/senate-bank-rules-rollback-meltdown-416158 … 8:56 AM – Mar 2, 2018

Elizabeth Warren. We’ve been down this road before. Whenever things are going ok in the financial system, the lobbyists flood the halls of Congress & convince politicians to roll back the rules – because what could possibly go wrong? http://www.nytimes.com/1999/11/05/business/congress-passes-wide-ranging-bill-easing-bank-laws.html … 9:00 AM – Mar 2, 2018

In a video posted to Twitter on Friday, Warren explained that this bipartisan effort to fullfill “the wish lists of big bank lobbyists” goes a long way toward illustrating how Congress works for the wealthiest at the expense of the majority of the public.

Congress has forgotten the “devastating impact of the financial crisis”, Senator Elizabeth Warren said on Tuesday as Republicans moved closer to relaxing banking regulations implemented after the financial crash of 2008.

A vote of 67-32, with support from Democrats facing tough midterm elections, allowed the Senate to begin debating a bill that would scale back some of the 2010 laws, known as Dodd-Frank, meant to prevent future abuses in the financial system.Republican leaders said the bill would boost small banks and businesses. Senior Democrats said it was an attempt to deregulate big banks that caused the 2008 crash, inviting similar disaster.Warren, the Massachusetts Democrat, said in a morning press conference: “There’s Democratic and Republican support because the lobbyists have been pushing since the first day Dodd-Frank passed to weaken the regulations on these giant banks.

Analysis of the Senate bill by the non-partisan Congressional Budget Office (CBO), released on Monday night, found it would increase the likelihood of a taxpayer-funded bailout of failed banks.

“People in this building may forget the devastating impact of the financial crisis 10 years ago – but the American people have not forgotten. The American people remember. The millions of people who lost their homes; the millions of people who lost their jobs; the millions of people who lost their savings, they remember and they do not want to turn lose the big banks again.”Bernie Sanders said in a statement: “Now is not the time to deregulate banks that have more than $3.5tn in assets and lay the groundwork for another massive financial collapse. Now is the time to take on the greed and power of Wall Street and break up the largest financial institutions in the country.”Pat Toomey, a Pennsylvania Republican who chairs a key banking subcommittee, touted the measure as “progress” toward providing relief from regulation for small credit unions and regional banks.“This begins the process of pushing back a little bit on the excesses of Dodd-Frank,” Toomey said, “which are holding back economic growth and imposing completely unreasonable costs on small banks and banks that are not systemically a threat to the country.” … 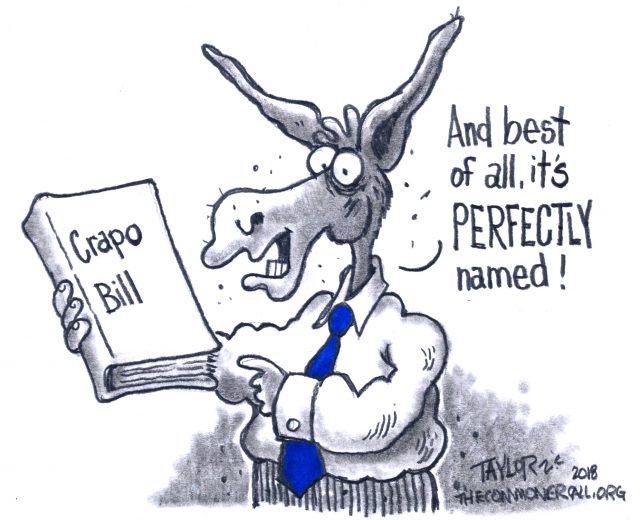 WASHINGTON ― With support from Senate Democrats, Congress is on track to pass a bill that would enrich banks but slightly raise the odds of a financial crisis like the one that tanked the economy 10 years ago.

Seventeen members of the Democratic caucus joined nearly all Republican senators on Tuesday in voting to advance the Economic Growth, Regulatory Relief, and Consumer Protection Act, a bill that was co-sponsored by Senate Banking Committee Chair Mike Crapo (R-Idaho) and committee member Sen. Jon Tester (D-Mont.). The legislation garnered support from a mix of centrist and red-state Democrats, who argued it would help small community banks and make it easier for Americans to buy a home by increasing access to capital.

The Crapo bill contains a host of other provisions, including one that would reduce data collection used to detect discriminatory lending practices and others that Democrats say would protect consumers.

That the legislation would also increase the risk of a financial crisis isn’t a criticism from some far-left interest group, however ― it’s the conclusion of the Congressional Budget Office, which produces independent, nonpartisan analysis of budgetary issues.

In looking at the legislation’s costs, the CBO considered the odds of a systemically important financial institution failing or a broader financial collapse. “CBO estimates that the probability is small under current law and would be slightly greater under the legislation,” the budget scorekeeper said in a cost estimate published this week.

The 2010 financial reform law, commonly known as Dodd-Frank, imposed a range of new regulations on financial institutions, including increased capital requirements that force banks to hold more capital relative to their assets. …