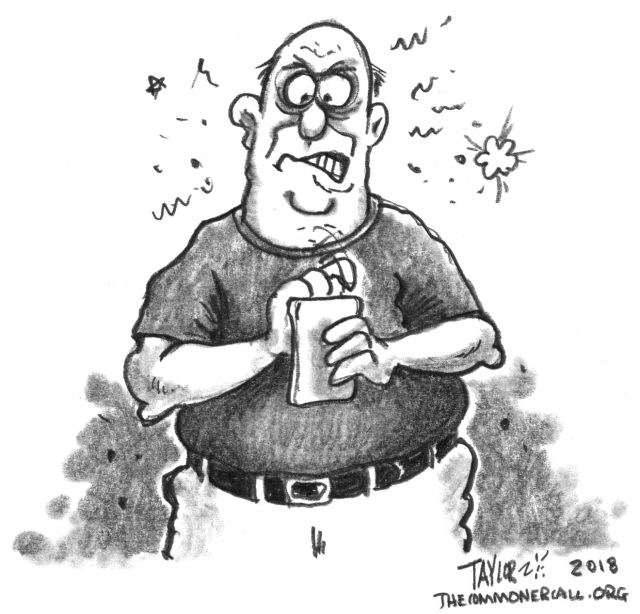 “To threaten to kill a 17 year old because he had the temerity to ask a question of a politician says a lot about the people making the threats.” — Online comment.

At a town hall on Wednesday night, the survivors of the shooting in Parkland, Florida, made Sen. Marco Rubio (R-FL) squirm with a series of pointed questions about his support for the Second Amendment. One question that drew particularly loud cheers came from Cameron Kasky, when he asked Rubio, “Can you tell me right now that you will not accept a single donation from the NRA?”

But while the crowd at the town hall may have forcefully backed Kasky, the 17-year-old has been subject to a different reception online, where he says he’s encountered vicious smears and death threats.

The trolling has gotten so bad that, earlier in the day, Kasky said he was taking some time off Facebook because “the death threats from the NRA cultists are a bit more graphic than those on Twitter.”

The trolling has gotten so bad that, earlier in the day, Kasky said he was taking some time off Facebook because “the death threats from the NRA cultists are a bit more graphic than those on Twitter.”

Temporarily got off Facebook because there’s no character count so the death threats from the @NRA cultists are a bit more graphic than those on twitter. Will be back when I have the time for it. Busy getting my feelings hurt by fellow teenagers at Br**tb*rt

Kasky isn’t the only teenager getting death threats for their activism against the NRA. David Hogg, also 17, has fiercely advocated on television for improved gun control laws in the wake of the mass shooting which left seventeen of his classmates and teachers dead. Over the last week, he has been a central target for conspiracy theorists believing that he is in fact not a student but a “crisis actor”. One video claiming Hogg was an actor got more than 200,000 views and was the top trending video on YouTube before it was taken down.

Hey @FLOTUS you say that your mission as First Lady is to stop cyber bullying, well then, don’t you think it would have been smart to have a convo with your step-son @DonaldJTrumpJr before he liked a post about a false conspiracy theory which in turn put a target on my back

Harassment of the survivors of mass shootings has become a horrifyingly familiar part of the post-tragedy routine. …

And Then There Is This: Parkland Father Admits He Doctored Email To Make It Seem CNN Had Scripted Town Hall Questions

Right-wing websites were already conspiring to smear the students of Marjory Stoneman Douglas High School literally while the incident was still underway.

Forty-seven minutes after news broke of a high school shooting in Parkland, Fla., the posters on the anonymous chat board 8chan had devised a plan to bend the public narrative to their own designs: “Start looking for [Jewish] numerology and crisis actors.”

They went forward with that plan in Youtube videos that portrayed the students as actors being fed lines—and their efforts got a pair of thumbs up from Donald Trump Jr., who seems to appreciate a good conspiracy. All of which made anonymous posters from 4Chan and 8Chan ecstatic.

“Extra thanks if you’re spreading info or memes about this kid. It’s already breaking through the normie-sphere. KEEP PUSHING!”

But even the alt-Reich conspirators probably didn’t think they would get assistance—from the father of one of the students.

[Colton] Haab told the Fox News host Tucker Carlson on Thursday night that CNN executive producer Carrie Stevenson gave him a question to deliver to lawmakers and told him to “stick to the script.”

To support his statement, Glenn Haab produced an email intended to show that CNN was trying to force his son Colton to deliver a scripted statement. Naturally, Fox News and Carlson were hip-deep in the “crisis actor” meme, and launched into full attack mode stating that the students were simply pawns of left-wing forces, and that the powerful statements many students had been making were simply lines being fed to them by CNN and others.

Except that Glenn Haab doctored the emails. An act that didn’t just attack CNN, but hurt the other students at his son’s school. …