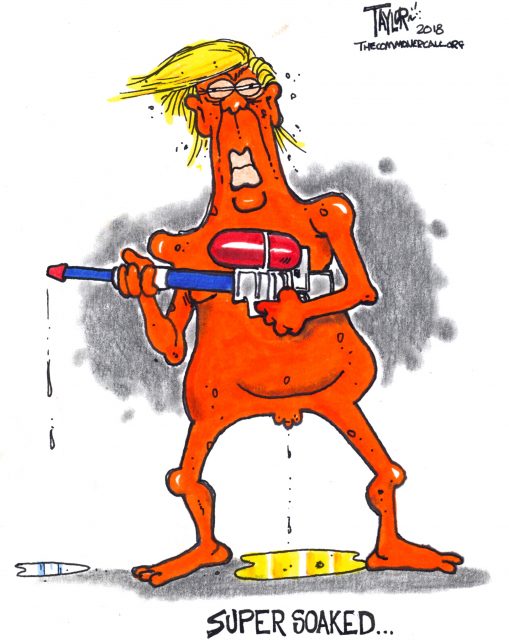 Set aside the insanity and moral vacuum and political cowardice of an administration whose centerpiece response to yet another school shooting is to put forward the idea of arming up teachers and “hardening” our schools into closed bunkers.

All of that is bizarre enough but then we get Donald ‘Sgt. Bone Spurs’ Trumputin pontificating about how things would have been different if he had been on hand at the Marjory Stoneman Douglas High School campus:

“You don’t know until you’re tested, but I really believe I’d run in there even if I didn’t have a weapon,” blustery Sgt. Bone Spurs proclaimed during remarks at a White House luncheon with state governors.

This from a guy who used multiple deferments and a medical claim of bone spurs — which never hindered his non-stop golf game — to avoid the opportunity to put all his combat skills to use in service to the country during the Vietnam war. But as if that is not bad enough, in a 1997 on-air interview with shock jock Howard Sterns Sgt. Bone Spurs had the callousness to call himself a “brave soldier” as he compared his disco era serial one-night-stand deviancy to the battlefield horrors other less pampered and privileged members of his generation experienced in Vietnam as he equated landmines to vaginas.

“It’s amazing, I can’t even believe it. I’ve been so lucky in terms of that whole world, it is a dangerous world out there. It’s like Vietnam, sort of. It is my personal Vietnam. I feel like a great and very brave solider,” Sgt. Bone Spurs bragged as he explained to Stern how he avoided STDs during his version of night maneuvers. As Sgt. Bone Spurs explained it, women’s vaginas are “potential landmines” warning “there’s some real danger there.”

Tell that to the amputees at Walter Reed or your local VA hospital.

In another 1993 interview with Stern, Sgt. Bone Spurs drew a direct parallel between bloody rice paddies and Studio 54:

“You know, if you’re young, and in this era, and if you have any guilt about not having gone to Vietnam, we have our own Vietnam — it’s called the dating game. Dating is like being in Vietnam. You’re the equivalent of a soldier going over to Vietnam.”

So now, years later and several other armed conflicts he successfully evaded, we have Sgt. Bone Spurs telling us how to make our schools safe:

Somehow, in the cramped, serpentine recesses of his brain, we have Sgt. Bone Spurs equating making a leisurely shot on the putting green at Mar-a-Lago to a close quarters fire fight in a classroom full of terrified children.

“Some people can’t take their club back?” CNN host Don Lemon said. “What is the president of the United States doing comparing the pressure of being under fire in a school shooting to missing a putt? Are you serious, Mr. President? Are you taking the lives of those students and teachers seriously? Yes, seriously? We’ve heard what you say but so far it’s all just talk.”

Words of wisdom from Sgt. Bone Spurs, not to be confused with the wisdom of a battle-tested warrior, or even a thinking human being. If you want to see how our overweight, balding, yam-hued presidential pretender warrior springs into action in a moment of potential threat check out below…

It’s a profile of something, but certainly not courage.

(Commoner Call cartoon by Mark L. Taylor, 2018. Ope source and free to use with link to www.thecommonercall.org )

Back in the early 1970’s the headline-grabbing gun crimes were skyjackings of commercial jetliners. In a 1972 episode of All In The Family Archie Bunker proposed a solution that sounds eerily similar to Trumputin’s idea of arming up teachers. Could it be between bouts of overdosing on Fox News Trumputin is overdosing on old TV reruns?