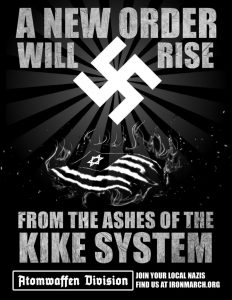 Late last month, ProPublica reported that the California man accused of killing a gay and Jewish University of Pennsylvania student was an avowed neo-Nazi and a member of Atomwaffen Division, one of the country’s most notorious extremist groups.

The news about the murder suspect, Samuel Woodward, spread quickly throughout the U.S., and abroad. Woodward was accused of fatally stabbing 19-year-old Blaze Bernstein and burying his body in an Orange County park.

The report, it turns out, was also taken up in the secretive online chats conducted by members of Atomwaffen Division, a white supremacist group that celebrates both Hitler and Charles Manson.

“I love this,” one member wrote of the killing, according to copies of the online chats obtained by ProPublica. Another called Woodward a “one man gay Jew wrecking crew.”

“What I really want to know is who leaked that shit about Sam to the media,” a third member wrote.

At least one member wanted to punish the person who had revealed Woodward’s affiliation with Atomwaffen.

“Rats and traitors get the rope first.”

Encrypted chat logs obtained by ProPublica — some 250,000 messages spanning more than six months — offer a rare window into Atomwaffen Division that goes well beyond what has surfaced elsewhere about a group whose members have been implicated in a string of violent crimes. Like many white supremacist organizations, Atomwaffen Division uses Discord, an online chat service designed for video gamers, to engage in its confidential online discussions.

In a matter of months, people associated with the group, including Woodward, have been charged in five murders; another group member pleaded guilty to possession of explosives after authorities uncovered a possible plot to blow up a nuclear facility near Miami.

The group’s propaganda makes clear that Atomwaffen — the word means “nuclear weapons” in German — embraces Third Reich ideology and preaches hatred of minorities, gays and Jews. Atomwaffen produces YouTube videos showing members firing weapons and has filmed members burning the U.S. Constitution and setting fire to the American flag. But the organization, by and large, cloaks its operations in secrecy and bars members from speaking to the media.

The chat logs and other material obtained by ProPublica provide unusually extensive information about the group’s leaders, wider makeup, and potential targets, indicating:

The group may have as many as 20 cells around the country, small groups of indeterminate size in Texas, Virginia, Washington, Nevada and elsewhere. Members armed with assault rifles and other guns have taken part in weapons training in various locations over the last two years, including last month in the Nevada desert near Death Valley.

Members have discussed using explosives to cripple public water systems and destroy parts of the electrical power grid. One member even claimed to have obtained classified maps of the power grid in California. Throughout the chats, Atomwaffen members laud Timothy McVeigh, the former soldier who bombed the Alfred P. Murrah federal building in Oklahoma City in 1995, killing 168, including numerous children. Charleston church shooter Dylann Roof and Anders Breivik, the Norwegian extremist who massacred 77 people, also come in for praise.

Woodward posted several messages in the days after Bernstein’s murder, but before he was arrested and charged. In one thread, he told his fellow Atomwaffen members that he was thinking about the “passing of life” and was “truly grateful for our time together.”

Woodward, 20, has pleaded not guilty in the Bernstein case. Prosecutors have said they are exploring whether the murder constituted a hate crime and detectives are now investigating what role, if any, Atomwaffen might have played in the homicide. Woodward and Bernstein had known each other in high school in California, and appear to have reconnected somehow shortly before the killing.

Law enforcement, both federal and state, have said little about what they make of Atomwaffen. But organizations dedicated to tracking and studying hate groups have been calling attention to what they regard as the group’s considerable threat.

“We haven’t seen anything like Atomwaffen in quite a while,” said Keegan Hankes, a researcher who tracks the group for the Southern Poverty Law Center. “They should be taken seriously because they’re so extreme.”

Jeffrey Kaplan, a historian, has studied racial extremists for decades and edited the Encyclopedia of White Power. In an interview, he suggested that Atomwaffen is dangerous, but that talk in their propaganda and private conversations of aims such as toppling the U.S. government amounted to what he called a kind of “magical thinking.” Kaplan said such groups often contain a handful of diehards who are willing to commit crimes and many more wannabes who are unwilling to do much more than read fascist literature.

“It’s very hard to go from talking about violence to looking a guy in the eyes and killing him,” said Kaplan, a professor of national security studies at King Fahd Defense College in Saudi Arabia.

“Politics are useless. Revolution is necessary.”

Those records and interviews make clear that John Cameron Denton is the leader of Atomwaffen. Denton, 24, grew up in Montgomery, Texas, a small town about 30 miles north of Houston. Public records show Denton currently lives in the nearby town of Conroe, a few miles to the south of Montgomery.

ProPublica has obtained several photos of Denton. In one, Denton, who is short and wiry, has a bulky combat shotgun slung over his shoulder. He seems to favor camouflage pants and black T-shirts emblazoned with the logos of National Socialist Black Metal bands, a fringe subgenre of heavy metal music that mixes Satanic and Nazi themes.

“Politics are useless. Revolution is necessary,” Denton said in a chat post expressing the Atomwaffen worldview.

Records and interviews show Denton goes by the name Rape in the online conversations, and he appears to be involved in nearly every aspect of the organization. He shapes Atomwaffen’s ideology, chooses designs for its distinctive black-and-white posters and online propaganda, and selects the books that new recruits must study as part of their initiation, said a former Atomwaffen member interviewed by ProPublica. Denton’s younger brother, Grayson Patrick Denton, 19, is also a member, according to the chat logs and interviews; within the group, he goes by Leon, an homage to a Belgian fascist who fought with the SS.

The leader’s identity was first revealed last month in a report by the Anti-Defamation League. Afterward, Denton was seething. “They think they can stop RAPE!? THEY THINK THEY CAN STOP ME!?!,” Denton wrote in one chat message.

Just how many people belong to Atomwaffen is unknown. The ex-member told ProPublica that the group has enlisted about 80 members across the country, many of whom joined after the deadly events in Charlottesville last summer.

An internal Atomwaffen document obtained by ProPublica shows members scattered across 23 states and Canada. The group’s largest chapters are based in Virginia, Texas and Washington, according to a message posted in the chats by an Atomwaffen recruiter last summer.

“Each chapter operates independently,” wrote the recruiter. “We want men who are willing to be the boots on the ground. Joining us means serious dedication not only to the Atomwaffen Division and its members, but to the goal of Total Aryan Victory.”

A review of the chat logs shows messages posted by people using more than 100 different user names. Access to the discussions is tightly controlled, and it is unclear if some members post under multiple usernames. …

Bitcoin And Funding Of The Fascist Right

According to white nationalist Richard Spencer, Bitcoin is the “currency of the alt-right.”

The decentralized, peer-to-peer, crypto-currency has obvious appeal to hate group leaders and other influential extremists: no company and no government can intervene to stop the donations from flowing.

Because of this, many on the far-right were early adopters. And because they were early adopters, many cashed in as the currency’s valuation skyrocketed at the end of 2017. What follows below is a list of some of the most prominent white nationalists and other extremists who accept Bitcoin. Clicking on the accounts will take you to a page where you can see all transactions and total Bitcoin (BTC) received.

Interested in how tech companies are supporting hate groups? See our chart of how these companies keep hate groups running.