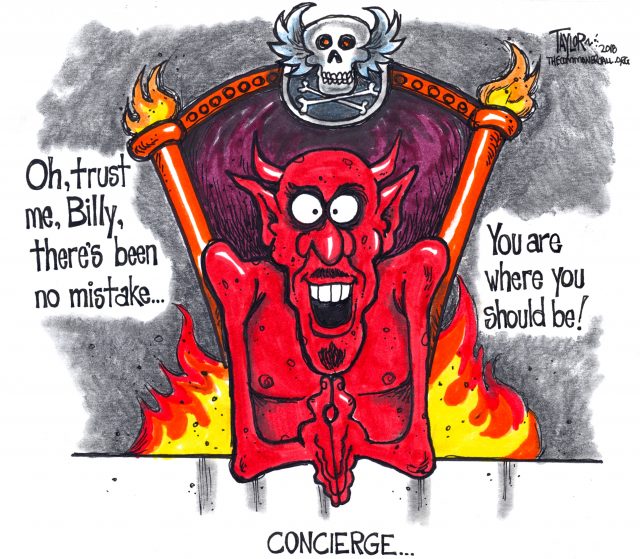 When Billy Graham stands before the judgment seat of God, he may finally realize how badly he failed his country, and perhaps his God. On civil rights and the environmental crisis, the most important issues of his lifetime, he championed the wrong policies.

Graham was on the wrong side of history.

The world’s most famous evangelist let his apocalyptic anticipation of the coming kingdom of God blind him to the realities of living in this world.

For Graham, the Bible had a clear message for Christians living in what he believed were humans’ last days on earth. Individuals alone can achieve salvation; governments cannot. Conversions change behaviors; federal policies do not.

These convictions shaped the evangelist’s views on civil rights.

In the late 1950s, Graham integrated his revivals and seemed to support the burgeoning civil rights movement. This is the Graham most Americans remember.

When his influence really would have counted …he was too locked into last-days fearmongering to recognize the potential of the state to do good. We are all paying the price.

But as the movement grew, expanded and became increasingly confrontational, the evangelist’s position changed.

Within days of the publication of King’s famous 1963 Letter from a Birmingham Jail, Graham told reporters that the Baptist minister should “put the brakes on a little bit”.

He criticized civil rights activists for focusing on changing laws rather than hearts.

In 1971, Graham published The Jesus Generation, a book on the coming apocalypse. Looking for signs of Jesus’s second coming had become an obsession of Graham’s, as it was for millions of other evangelicals in the mid-20th century.

In the book, Graham praised the wisdom of young people who rejected the federal government as a tool for rectifying injustices.

“These young people don’t put much stock in the old slogans of the New Deal, the Fair Deal, the New Frontier and the Great Society,” he said. “They believe that utopia will arrive only when Jesus returns. Thus these young people are on sound Biblical ground.”

For six decades, Graham taught Americans that the federal government could not be an instrument of God to bring about justice, not on race matters and not on other significant issues. Although he believed in racial equality, his theology blinded him to what we now know was the best means for achieving that equality.

More recently, the evangelist denied the threat of global warming and rejected federal efforts to stymie it.

In a 1992 book focused on the signs that the world was nearing its end, the preacher suggested that if humankind were going to survive, businesses needed to reduce pollution and stop contributing to global warming.

In a revised 2010 version of the book, Graham eliminated the phrase “global warming” from the text altogether. Global warming no longer existed in the mind of Graham as a real threat. …

The Soul-Crushing Legacy Of Billy Graham

“stone hustler from the start…”

Billy Graham saved my soul. In 1973, I was ten years old, growing up in a working-class clan in North Carolina, and I had a problem: I liked boys. Also, men. And even though my family’s Methodist church served up the mildest form of Protestantism – no dire warnings about fornicators and sodomites and feminists from our pulpit – it was impossible not to know, from a million cultural cues and a fair number of spankings I’d received for “acting sissy,” that this was not good. So when I heard that the world’s most beloved televangelist was coming to Raleigh that September for one of his extravagant “crusades,” I begged my parents to take me. It didn’t take much. They knew what they were dealing with. Maybe Billy Graham could straighten out their boy.

Graham always insisted, contrary to all evidence, that he had no interest in politics. In truth, he was a Machiavellian back-room operator.

Graham was then at the apex of his powers, both religious and political. Since the late 1940s, when two of the country’s most powerful publishers – William Randolph Hearst and Henry Luce – helped turn the ambitious blond hunk of North Carolina farmboy into a national celebrity, Graham had merged old-time fundamentalism with modern media to create a wildly popular civic religion. The Billy Graham Evangelistic Association produced movies, radio shows, magazines and syndicated

newspaper columns. Its crusades were television spectacles watched by millions of families like ours. They sometimes became headline news: Just a few years earlier, a single night of “crusading” in Seoul, South Korea, was attended by a jaw-dropping 1.1 million people. You might have called Billy Graham the rock star of Biblical literalism, except that he was bigger than Elvis and the Beatles combined.

The Carolina Crusade of 1973 was held in N.C. State University’s football stadium …

Asked in 1972 if he believed in miracles, Billy Graham answered: Yes, Jesus performed some, and there are many “miracles around us today, including television and airplanes.” Graham was no theologian.

Neither was he a prophet. Jesus said “a prophet hath no honor in his own country.” Prophets take adversarial stances toward their times, as did the 20th century’s two greatest religious leaders, the Rev. Martin Luther King Jr. and Pope John Paul II. Graham did not. Partly for that reason, his country showered him with honors.

Graham frequently vowed to abstain from partisan politics and almost as frequently slipped this self-imposed leash, almost always on behalf of Republicans.

So, the subtitle of Grant Wacker’s 2014 book, “America’s Pastor: Billy Graham and the Shaping of a Nation, ” is inapposite. When America acquired television and a celebrity culture, this culture shaped Graham. Wacker, of Duke University’s Divinity School, judges Graham sympathetically as a man of impeccable personal and business probity.

Americans respect quantification, and Graham was a marvel of quantities. He spoke, Wacker says, to more people directly — about 215 million — than any person in history. In 1945, at age 26, he addressed 65,000 at Chicago’s Soldier Field. The 1949 crusade in Los Angeles, promoted by the not notably devout William Randolph Hearst, had a cumulative attendance of 350,000. In 1957, a May-to-September rally in New York had attendance of 2.4 million, including 100,000 on one night at Yankee Stadium. A five-day meeting in Seoul in 1973drew 3 million. …