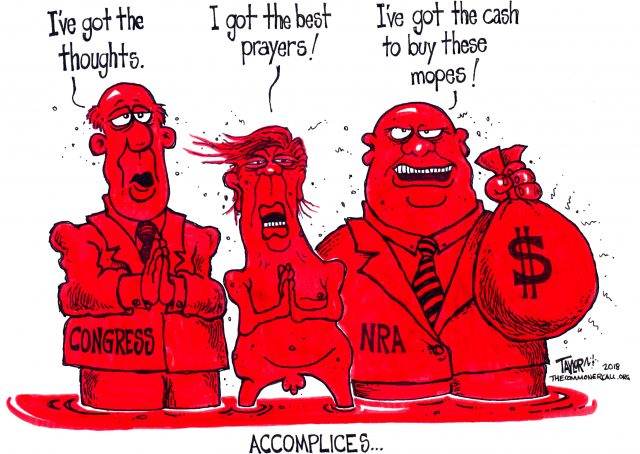 The center-left’s sins on this front are rooted in cowardice; the right’s, in quasi-religious conviction.

On Thursday morning, the president delivered a speech about gun violence without ever uttering the word gun. By the time Donald Trump began his remarks, America had suffered 18 school shootings in 44 days, and more than 300 mass shootings since the start of his presidency. But this broader context also went unmentioned. Instead, Trump focused his address narrowly on Wednesday’s massacre at a high-school in Parkland, Florida, and the need for “healing” in its wake. The president spoke of God and prayers and love. He promised to “tackle the difficult issue of mental health” (an endeavor which apparently requires, in Trump’s estimation, draconian cuts to federal spending on mental health-care).

“Alas, for all their claims to Christianity, many conservative voters do not like to think of themselves as flawed and humble creatures – but rather, as temporarily embarrassed action heroes. Guns don’t make Republicans safe. But they do make many feel safe.”

And then, he delivered one of the most Orwellian lines of this most-Orwellian presidency.

“It is not enough to simply take actions that make us feel like we are making a difference,” Trump said. “We must actually make that difference.”

In a speech devoid of references to firearms – and delivered by a vehement opponent of all forms of gun control – the implication of these sentences was unmistakable: Some may have a superstitious belief that mass shootings can be prevented by restricting access to guns, but those who care about evidence-based policymaking know that doesn’t work.

This is, of course, the opposite of the truth The Trump GOP’s approach to issues of public safety is defined by its dedication to privileging policies that make conservatives feel secure in their worldview over ones that would actually make them secure in their communities.

The cause of our nation’s epidemic of gun violence is neither complicated nor mysterious. The United States is home to 4.4 percent of the world’s humans – and nearly half of all its civilian-owned guns. Since 2015 there have been more privately-held firearms than people in the United States. No other country has anything resembling that density of gun ownership (not even failed states wracked by perpetual civil war) – and no other developed country has anything resembling our gun homicide rate.

The particular tragedy that struck Florida on Wednesday was likely the product of myriad social pathologies. It is possible that in a country with just as many guns as ours – but with better systems of education and mental health; or a less cutthroat economic system and more generous welfare state; or a less troubled racial history and stronger sense of social solidarity; or a less toxic ideal of masculinity and more women in positions of power, Nikolas Cruz wouldn’t have turned Marjory Stoneman Douglas High School into a warzone this week.

But it is a certainty that if our gun ownership rate was comparable to that of our peers in the developed world, we could remain every bit as messed up as we are today, and still witness far fewer atrocities like the one Cruz perpetrated. …

Also From The Article…

• After Connecticut passed a law requiring gun purchasers to first obtain a license, gun homicides fell by 40 percent and suicides fell by 15.4 percent.

• The national assault weapons ban did not decrease gun deaths in the US, though if it had existed longer it might have made certain shootings less lethal. The end of the assault weapon ban did meaningfully increase homicides in Mexico.

Family and friends of the 17 people killed in Wednesday’s shooting at a high school in Parkland, Florida, are speaking out about their lost loved ones, sharing words about their talents and aspirations as well as stories of heroism and sacrifice in their final moments.

These are the names of the victims and their stories. …

Wednesday’s mass shooting at a high school in Parkland, Florida, that has left at least 17 kids dead is a good time to remember how hollow and vacuous many of our elected officials’ “thoughts and prayers” sentiments are. While the NRA and the Republican Party spend the next many hours discussing mental illness and how the real issue is the mental illness that they are completely unwilling to tackle regardless of how many people die, let’s remember that meaningful gun safety laws could be enacted right now. Those laws haven’t been created because the NRA owns the Republican Party. A few months ago the New York Times put together a list of the senators and congressmen and women who receive the most financial funding from the NRA. Here’s the list with each Republican:

These are the numbers that can be reported. The NRA uses all kinds of dark money to get these candidates tons of “help.” In the end, as you watch the above politicians opine about “tragedy” just remember, the cost to buy their souls wasn’t that much in the scheme of things.

Sign and send a petition to your member of Congress: Keep your thoughts and prayers. Take action to reduce gun violence.

Cynical thoughts and empty prayers are not enough. Time to throw the gun violence enablers in congress out.

Learn More On What You Can Do.