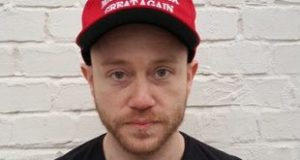 Jeff Cremeans is a process server — also known as the guy who hands defendants a thick stack of court documents and says, “you’ve been served.” In his 25 years in the business, he’s been screamed at, threatened, had a chair thrown at him — he’s even driven a boat to an elusive defendant’s lakehouse to serve him. But he’s never seen someone work as hard as Andrew Anglin, the world’s most notorious neo-Nazi troll, to duck being served.

Cremeans has been searching for Anglin in his hometown of Columbus, Ohio, since April 2017. He’s been spotted by locals, but never served. Anglin is being sued for launching a “troll storm” at a Jewish woman in Montana named Tanya Gersh. Gersh was involved in a dispute with white nationalist Richard Spencer’s mother, and Anglin encouraged his readers at the Daily Stormer to contact Gersh. Gersh told VICE News what happened next: hundreds of harassing messages, some targeting her 12-year-old son.

Anglin’s lawyer, Marc Randazza, argued to VICE News that Anglin was simply exercising his First Amendment right to free speech. But rather than make that argument in court, for now, Anglin’s in hiding, avoiding being served. So when Cremeans got a tip that Randazza — who’s based in Las Vegas — had flown into Columbus, he followed him, hoping Randazza would draw out his client.

Link to Story and 8+-Minute Video