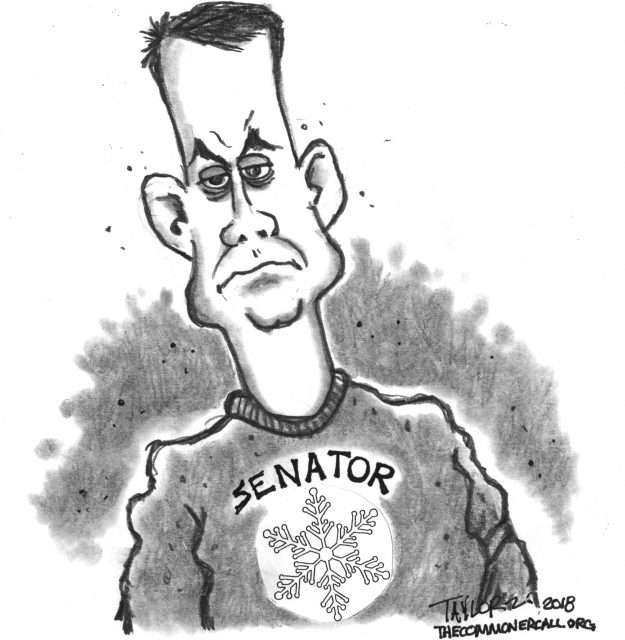 … there’s only one thing we can do!

Everyone needs a hobby — especially in the frigid depth of winter — and republican Arkansas Sen. Tom Cotton has offered up a great one: Letter writing; emailing and telephone messaging. Late last week the Arkansas Times reported the highly sensitive senator whined that he was getting so many letters from Ozark Indivisible progressives that he was looking into siccing the Capitol Police on citizens exercising their right to express their opinions to an elected public employee whose salary and cushy health insurance plan they pay for with their tax dollars. (We even pay for a full Senate onsite medical clinic while many of our neighbors go without health insurance.)

The unmitigated gall of those people!

Don’t they know Sen. Tommy is busy cooking up legislation to take insurance away from families and working up a sweat devising even bigger tax cuts for corporations and the wealthy freeloaders of the one percent. Hey, it’s a full-time job screwing over the poor and middle class!

What a delicate little Republican Snowflake! Tom Cotton may be in the running for the 2018 Most Fragile Republican Snow Flake Of The Year award but, as he did in 2017,  Donald Trumphole is far away the frontrunner for that lofty honor.

Well, there is only one thing any self-respecting progressive can do in such a situation:

You may remember our very own Sen. Ron “Don’t Bother Me While I’m Counting My Wife’s Family Money” Johnson did a similar thing last February when a Milwaukee constituent, Earl Good, a Vietnam veteran, received a “cease and desist” letter from Johnson’s office informing him he could no longer phone or visit Johnson’s district offices. He was limited to letter writing.

““The reason I reached out to Ron Johnson, I disagreed with several of the cabinet appointments that were made, and I was concerned about the Affordable Health Care Act, privatizing the veteran’s administration, the Russian hacking,” says Good.”

He admitted to being very persistent in trying to get calls through to speak to Johnson’s staff.

“Good admits he’s persistent; so persistent, on one occasion he called Senator Johnson’s office 83 times until someone picked up.

Unless you are a big money lobbyist that is actually the kind of persistence it takes to reach a senate staffer these days. Especially a republican senate staffer.

Since that story broke, I have been a regular caller to Johnson’s DC office. I’m not as persistent as veteran and fellow citizen Earl Good but I’m logging at least 2-3 calls per week and the occasional email. In a voicemail, Johnson cheerfully invites you to leave a message if you would like a staffer to call you back. Good luck with that, I request a response every time. So far? Nada.

But what the hell, it is a good hobby.

Sooo, how about launching some messages off to Sen. Cotton? Keep it firm but polite — no name calling (beyond “Snowflake”), or cussing.

You can send Sen, Cottom an email HERE.

You can send him a letter at: 124 Russell Senate Office Building, Washington, DC 20510

Oh, and as for Ron Johnson, you can get all his contact info HERE.

(Commoner Call cartoon by Mark L. Taylor, 2018. Open source and free to use with link to www.thecommonercalll.org )