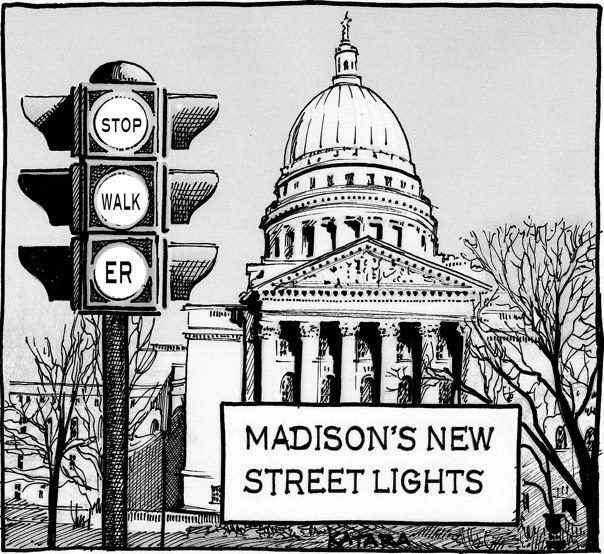 The win by a Democrat for a state senate seat in Wisconsin’s special election on Tuesday is being seen as the latest sign that traditional Republican strongholds, including districts where Donald Trump beat rival Hillary Clinton handily in 2016, could be up for grabs as the nation eyes this year’s mid-term elections.

The victory by Patty Schachtner, the chief medical examiner at a local hospital, over Republican Adam Jarchow, who currently serves in the State House, in Wisconsin’s 10th Senate District—where Trump triumphed over Clinton by 17 points—was an indication to many Democrats, as the Milwaukee Journal-Sentinel reports, that they are “taking hold of the energy that benefited their party in special elections last year in Alabama, Virginia and Oklahoma.” According to reported tallies, Schachtner beat Jarchow by approximately nine points.

So inspired by the GOP loss was Republican Governor Scott Walker, a darling of the billionaire Koch Brothers and a reliable supporter of President Donald Trump, that he sent out a warning to his fellow Republicans that they better “wake up” to the 2018 threat.

For his part, steelworker Randy Bryce (aka @IronStache), the Democrat who has launched a populist campaign to defeat Speaker of the House Paul Ryan in his home district, indicated that Walker, Ryan, and other Republicans are right to worried:

Meanwhile, Wisconsin native and longtime political correspondent for The Nation John Nichols saw Walker’s tweet as a cheap fundraising ploy, but said his corporate and billionaire backers might not be able to save him this year if the tide continues to turn against Trump and the regressive policies Republicans have pushed at both the state and federal level:

Scott Walker is going to try to use the shocking defeat of one of his allies in a special election Tuesday night to raise money. But money may not be enough to save Walker this time.

(This work is licensed under a Creative Commons Attribution-Share Alike 3.0 License.)
Link to Story
(Commoner Call photo by Mark L. Taylor, 2017. Open source and free to use with link to www.thecommonercall.org )