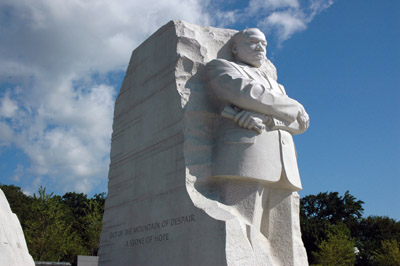 “In our world of the survival of the slickest and the smartest, we pave the way for raw greed and self-promotion. We make cowardice and avarice fashionable and compassion an option for losers.”

e live in one of the darkest moments in American history – a bleak time of spiritual blackout and imperial meltdown. Exactly 25 years ago, in my book Race Matters, I tried to lay bare the realities and challenges to American democracy in light of the doings and sufferings of black people. Back then, I reached heartbreaking yet hopeful conclusions. Now, the heartbreak cuts much deeper and the hope has nearly run out.

The nihilism in black America has become a massive spiritual blackout in America. The undeniable collapse of integrity, honesty and decency in our public and private life has fueled even more racial hatred and contempt.

The rule of Big Money and its attendant culture of cupidity and mendacity has so poisoned our hearts, minds and souls that a dominant self-righteous neoliberal soulcraft of smartness, dollars and bombs thrives with little opposition.

The escalating military overreach abroad, the corruption of political and financial elites at home, and the market-driven culture of mass distractions on the internet, TV, and radio push toward an inescapable imperial meltdown, in which chauvinistic nationalism, plutocratic policies and spectatorial cynicism run amok.

Our last and only hope is prophetic fightback – a moral and spiritual awakening that puts a premium on courageous truth telling and exemplary action by individuals and communities.

“The political triumph of Donald Trump is a symbol and symptom – not cause or origin – of our imperial meltdown. Trump is neither alien nor extraneous to American culture and history. In fact, he is as American as apple pie.”

The distinctive features of our spiritual blackout are threefold.

First, we normalize mendacity and naturalize criminality. We make our lies look like the normal order of things. And we make our crimes look like the natural order of things. We too often say Wall Street is a good servant – rather than a bad master – of the common good. Then we look away from the criminal behavior of big banks because they are too indispensable to prosecute.

We deny that drone strikes are killing innocent people abroad. Then we overlook killing lists on Terror Tuesday at the White House, when a president and his staff can decide to kill people without any legal procedure, including, sometimes, US citizens.

Second, we encourage callousness and reward indifference. We make mean-spiritedness look manly and mature. And we make cold-heartedness look triumphant and victorious. In our world of the survival of the slickest and the smartest, we pave the way for raw greed and self-promotion. We make cowardice and avarice fashionable and compassion an option for losers. We prefer market-driven celebrities who thrive on glitzy spectacles and seductive brands over moral-driven exemplars who strive on with their gritty convictions and stouthearted causes.

Third, we trump the moral and spiritual dimensions of our lives and world by applauding our short-term gains and superficial successes. This immoral and brutal disposition reinforces – and, in part, is a result of – the all-encompassing commodification of a predatory capitalism, running out of control in our psyches and societies.

The pervasive violence in our domestic lives and military policies abroad are inseparable from the profit-driven marketization of our spiritually impoverished capitalist civilization. And our civilization rests upon an American empire in decline and decay.

Imperial meltdown is at the center of our catastrophic times. Our ecological catastrophe is real. The Anthropocene epoch engulfs us. Human practices –especially big business and big military operations – now so deeply influence the Earth’s atmosphere that extinctions loom large.

The potential for nuclear catastrophe remains urgent as US-Russia tensions escalate and other nuclear powers, like North Korea, China, Pakistan, India, and Israel, are expanding and restless.

And our cultural catastrophes are often hidden – the vast and sad realities of trauma and terror visited upon vulnerable fellow citizens who are disproportionately poor people, LGBTQ people, peoples of color, women and children. …

Portside.org (1/11/18)
Martin Luther King, Jr.’s speech against the Vietnam War on April 4, 1967 at Riverside Church in New York one of the most profound and important speeches in American history. Without question, King’s speech in April helped to energize the anti-war movement and, through his profound moral analysis, in defining the degenerate role of the US in that war. It also helped to topple a sitting U.S. president – a profound lesson for us today. …
Read the Rest