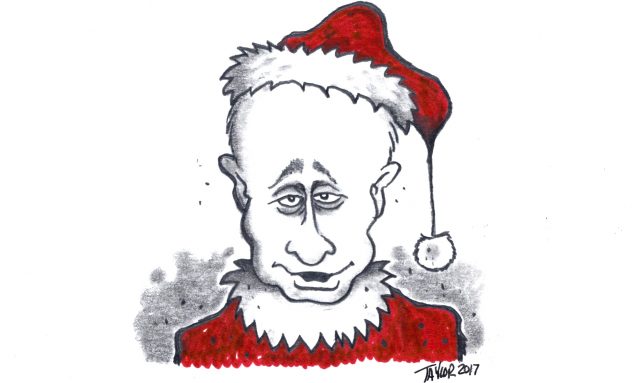 It’s that time of year and even Donald Trump is in the Christmas spirit, telling his already obscenely rich Mar-a-Lago pals, “You all just got a lot richer.“

But apparently – despite the season –  it’s not all Merry for Trump; he still possesses his talent for lashing out: Trump Lashes Out at FBI Deputy Director McCabe After Report He Will Retire Soon.

The spirit of Christmas includes his vile lies directed at FBI Deputy Director Andrew McCabe, who is  McCabe planning to retire early in the new year. Feel free to read the string of tweets Trump sent on Saturday afternoon, here is one as an example:

How can FBI Deputy Director Andrew McCabe, the man in charge, along with leakin’ James Comey, of the Phony Hillary Clinton investigation (including her 33,000 illegally deleted emails) be given $700,000 for wife’s campaign by Clinton Puppets during investigation?

Is there some reason Trump would target McCabe? Maybe this: Top FBI Official Grilled On Comey, Clinton In Hill Testimony.

McCabe got a lot of attention from the House Intelligence Committee, House Oversight Committee and House Judiciary Committee this week.

“McCabe appeared for more than 16 hours of testimony behind closed doors in two sessions this week before members of the House Intelligence, Oversight and Judiciary committees, amid growing calls for his firing from Republicans critical of the FBI’s handling of both investigations.”

McCabe told the House Intelligence Committee that Comey had informed him of conversations with Trump soon after they happened.

“The testimony suggests McCabe could corroborate Comey’s account, including Trump’s ask that Comey show him loyalty, which the President has strongly disputed. Comey previously testified that he briefed some of his senior colleagues at the FBI about this conversation with Trump.”

Much of the effort put forward by the House committees had less to do with Trump-Russia collusion and more to do with whether Comey mishandled the Clinton email investigation. Rep. Jim Jordan (R-OH), who is trying to outdo Rep. Trey Gowdy (R-SC) of Benghazi hearings fame, offered this shocking insight, “Everything that I’ve heard reinforces what I believed before.“

There is a clear difference of opinion and purpose between Republican and Democratis committee members:

“This hearing is part of an ongoing Republican attempt to divert attention,” said Rep. Jerrold Nadler of New York, the top Democrat on the House Judiciary Committee. “I mean, this hearing occurred with very little prior notice, with weeks before the relevant documents are obtained, but although we’re expecting the relevant documents. And suddenly we’re told we have an emergency hearing.”

There have been any number of attempts by Trump and his complicit supporters going all the way back to the firing of then acting Attorney General Sally Yates after she warned the White House that then National Security Adviser Mike Flynn could be blackmailed by Russians. This happened in the first weeks of the Trump administration.

Trump is picking up the pace of his deny, attack, and deflect self-defense.

From smoke to fire…

While Trump takes his fight to the public, or at least his supporters, not everyone is interested in the deflection: Warner Sees Fire In Russia Probe.

Sen. Mark Warner (D-VA) is the ranking Senate Intelligence Committee Democrat, he is the vice chair, serving alongside Sen. Richard Burr (R-NC). Warner offered that the Trump-Russia investigation is “the most important thing I will ever work on.”

Warner allows for having wondered at times if there was more smoke, but now he sees fire. The Senate investigation is expected to revisit Facebook ads as well as repeat interviews with Trump’s son-in-law and senior adviser Jared Kushner and Rrump’s eldest son, Donald Trump Jr.

It is Warner’s view that in spite of Trump wishes, the Trump-Russia collusion investigation will be the ongoing story of 2018.

Can Trump successfully fight off the Trump-Russia collusion investigation? Are there any references we can use to judge his behavior? It turns out, as The Washington Post reported Thursday, there are: The Presidency Survived The Watergate, Iran-Contra And Clinton Scandals. Trump Will Exact A Higher Toll.

Carlos Lozada reviews three books for The Washington Post as a way of offering perspective on the scandals of Richard Nixon and Watergate, Ronald Reagan and Iran-Contra, and Bill Clinton’s impeachment: THE FINAL DAYS, a book by Bob Woodward and Carl Bernstein, A VERY THIN LINE: The Iran-Contra Affairs, by Theodore Draper, and THE BREACH: Inside the Impeachment and Trial of William Jefferson Clinton by Peter Baker.

“No matter how distinct presidential scandals appear in their origins, however, there is also a weary sameness to how presidents react to them, how Washington mobilizes for them, how history looms over them. Each crisis feels unprecedented at the time, yet some of the most detailed journalistic accounts of presidential disgrace in recent decades … reveal how uniformly White House crises can unfold, explicitly drawing from one another, reliving dramas and pivots, and affecting how future scandals are judged.

“Investigations and revelations. Fury and denial. Indictments and firings. Today, the White House is in crisis mode once again, and all in Washington are playing their parts. What distinguishes the Trump scandal is how its central character appears to combine the worst qualities of his troubled predecessors.”

The patterns are starkly similar – evenings alone in the White House watching hours of television news, personal observations of how the media and opposition party hate him, how the rules are changed to make him pay. These are the patterns of Trump, but also Nixon and Clinton.

Maybe this sounds familiar with what we read in the news now, but consider this from Woodward and Bernstein:

“Though the president hoped that overseas trips and foreign policy moves might enhance his public standing, White House Chief of Staff Alexander Haig confided to a former Pentagon colleague that Nixon was “distracted, spending so much time on Watergate, it’s destroying his ability to lead.” Haig even repeatedly urged a top telecommunications policy official to not bring anything substantive to Nixon’s attention. “The President isn’t in any shape to deal with this,” he explained.”

The image of a president compartmentalizing and carrying on with the job is fodder for the media. Clinton admits to waking up “profoundly angry” for 4 1/2 years.

While less focused, meaning he has more targets, Trump’s defense strategy is not unique:

“The effort by Trump and his supporters in the right-wing media to depict Mueller’s probe into Russian electoral interference as a partisan “witch hunt” — another common phrase across these scandals — is a time-honored tactic for any White House under siege. Haig and Nixon press secretary Ron Ziegler agreed on the need to “place the impeachment issue in as partisan a light as possible,” and the Clinton team reached the same conclusion more than 20 years later. Baker describes the latter group’s strategy during the impeachment fight: “Attack the accusers, demonize the investigators, complain about partisanship while doing everything to foment it.””

The review is excellent, there is much more, but this seems like the perfect point to end with:

“For Trump staffers and enablers, the dilemma is different. There are few illusions about their leader left to be shattered. Their true challenge is less about surviving Trump’s eruptions than simply living with the choice they’ve made, convincing themselves that service to the nation — passing a tax cut, forestalling a war, reducing immigration — is worth it.”

With Nixon, Reagan and Clinton the turning point for them was the realization of their deceit. With Trump, we have no such allusions, he lies all the time. Trump supporters discount his lies and celebrate his offensiveness. Does Trump’s dishonesty work for or against Trump?

And remember: Fire, not Smoke!