The legal presumption of innocence is not the same as innocence itself.

Alabama voters will decide on Tuesday whether to send an accused child predator, Roy Moore, to the United States Senate. The mere thought of it sounds unthinkable, but the polls indicate that it is not only possible, but even likely that Moore will be elected.

Those who believe the allegations made against Moore by credible Alabama women, but plan to vote for him anyway, are beyond redemption. Nothing anybody says or does will deter them from supporting a member of their tribe.

Others are contemplating voting for Moore because the allegations against him haven’t been admitted or proven in a court of law. Donald Trump, his spokesliar Sarah Sanders, and a lot of nervous Republicans are contrasting Moore’s alleged misconduct from the allegations made against Al Franken on the ground that Franken, unlike Moore, has admitted misconduct. Since Moore has branded his accusers as liars, the argument goes, Moore is “innocent until proven guilty.”

But he’s not. Nobody is. And it’s time to put the phrase “innocent until proven guilty” in its place.

The phrase has a nice ring to it, and it is so ingrained in our public discourse that people actually believe it.

But it isn’t true, either in the case of Roy Moore, or generally. And it should not be used as a dodge to shield people from taking a stand against those who are credibly accused of deviant behavior.

So let’s get this straight.

“Innocent until proven guilty” is a legal presumption, not an immutable truth.

While the presumption of innocence works in the criminal justice system, it shouldn’t and can’t guide our thinking in the 99.9 percent of human activity that never gets near a courtroom.

The presumption of innocence is the rightfully cherished cornerstone of our criminal justice system. It means that a defendant does not have to prove his or her innocence at trial. Rather, the burden is on the prosecutor to prove guilt.

But the legal presumption of innocence is not the same as innocence itself. Charles Manson and Timothy McVeigh were never innocent, even though they were presumed to be so at trial. They were killers because they killed people, not because they were convicted. Their convictions only made it possible for the government to hold them accountable.

Similarly, a person who commits a crime does not magically become innocent because a judge or jury enters a verdict of not guilty. The jury’s acquittal of O.J. Simpson, for instance, doesn’t mean that he didn’t kill his wife. It only means that the jury wasn’t convinced that the government had proven guilt beyond a reasonable doubt. That, in turn, means that the government can’t punish him for that particular crime.

But it doesn’t mean he didn’t do it. He either did it or not. The jury has no power to change what happened. It only establishes the legal consequence.

While the presumption of innocence works in the criminal justice system, it shouldn’t and can’t guide our thinking in the 99.9 percent of human activity that never gets near a courtroom.

Outside the criminal justice system, we are left to reach conclusions about innocence or guilt based on whatever facts and circumstances are known to us. We not only reach judgments, but we act on them, without any help from the courts. Parents don’t need the criminal justice system to punish children for bad behavior. Employers don’t need courts to help them fire employees who steal from them, or who sexually harass their fellow workers.

In the world of sexual misconduct, “innocent until proven guilty” is an especially useless concept. Most sexual misconduct never sees the light of day, much less a courtroom. Some of it doesn’t rise to the level of criminal prosecution, however obnoxious and unacceptable it may be. Some occurred so long ago that prosecution is barred by statutes of limitations. Some is just too difficult to prove beyond a reasonable doubt.

If we had to avoid all judgment and defer all action on claims of sexual misconduct until the accused perpetrator either admits to it or is found guilty in court, sexual predators would never be held accountable.

Responsibility to think for youself

Not only are we free to reach our own conclusions without assistance from the criminal justice system, we often have a responsibility to do so. When we decide who to vote for, who to befriend, who to hire and fire, we don’t have the luxury of a judicial verdict to tell us what to do.

That is precisely where Alabama voters stand today with respect to Roy Moore. They are on their own, and cannot avoid the responsibility of thinking for themselves. It is their responsibility as citizens to listen to the allegations women have made against Moore, take them seriously, and decide whether they are credible.

If they believe that the allegations are credible, as I do, it would be an abomination to vote to send Roy Moore to the Senate.

If they give Moore’s accusers a fair hearing, and still don’t believe them, so be it. I find it hard to understand how they could reach that conclusion, but it’s not my decision to make for them. As long as they take their responsibilities as citizens seriously, and are confident that they are not sending a sexual predator to the Senate, let them make their choice strictly on the basis of political affiliation.

But hiding behind the fiction that Moore is “innocent until proven guilty” is an abdication of responsibility, and a poor excuse for failing to think.

With Roy Moore, Republicans Fully Embrace & Own The Ugliest Political Poster Boy, Ever 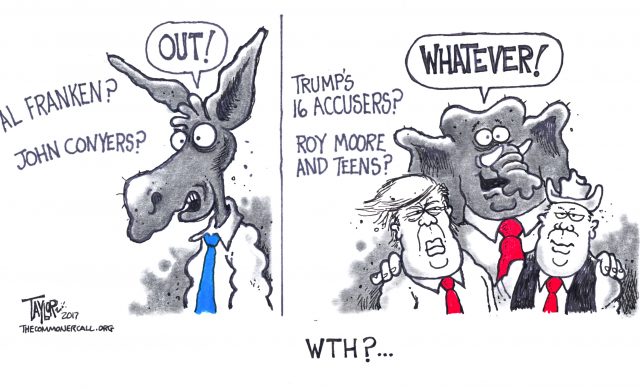 “He totally denies it. He said it didn’t happen.” – Donald J. Trump

There is a very real chance that an accused multiple child sex offender is going to be elected to the United States Senate on a Republican ticket. A man, who, in his 30’s was banned from the local mall because of his reported predatory hitting on teenage sales girls. The behavior by the young assistant district attorney – who, obviously, should have known better – was so troubling it freaked out the community. With a few notable exceptions, republicans have been pretty mum on whether or not moralistic predator Alabama Judge Roy Moore should drop out of the race for senate, or if he were to be elected, whether or not the senate should refuse to seat him.

Just as a chain is only as strong as it’s weakest link, a political party is only as legitimate as the worst characters it is willing to endorse. With Roy Moore the republicans are speaking loudly about their complete lack of values and basic morality.

Donald Trump stapled Moore to the forehead of the party with his endorsement of Moore.

Despite warnings to not do so, Donald Trump stapled Moore to the forehead of the party last week with his endorsement of Moore – based primarily it seems on wanting to have enough votes to hand over the future of the working and middleclass for the enrichment of the corporations and the wealthiest 1% (the Trump family cut from the GOP tax scam rings in at about $1 billion). With Trump’s full-throated endorsement and nobody in congress with the moral scruples to disagree with the pussy-grabber-in-chief the republicans have confirmed that they are perfectly comfortable having accused child molesters represent their party and program.

Anything, it seems, on behalf of the Wall Street alligators.

The Moore case is one of those shameful times in American politics when one can reasonably ask: “How much lower can they go?”

Well, with the republicans we have seen nothing yet. If the Mueller investigation leads to major indictments against Trump and his pals expect to see the republicans lock arms in full-throated defense of treason. When a party can cozy up to an accused – multiple – child molester it is nothing to excuse and defend treason.

As for the United States? Time to wake up, people.