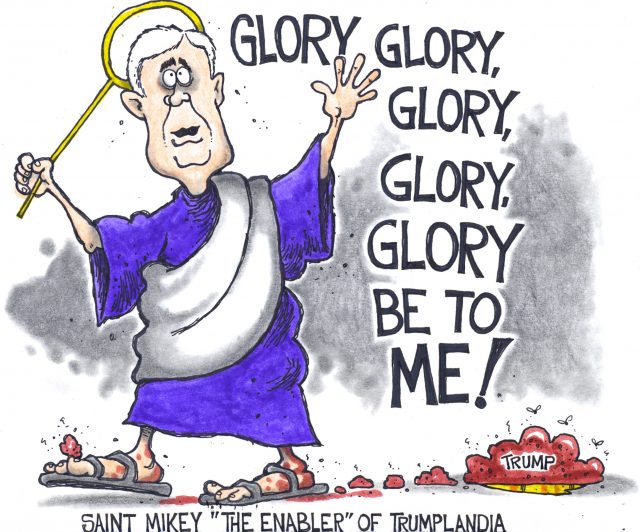 Will the vice president—and the religious right—be rewarded for their embrace of Donald Trump?

By McKay Coppins
The Atlantic (January/February 2018)

No man can serve two masters, the Bible teaches, but Mike Pence is giving it his all. It’s a sweltering September afternoon in Anderson, Indiana, and the vice president has returned to his home state to deliver the Good News of the Republicans’ recently unveiled tax plan. The visit is a big deal for Anderson, a fading manufacturing hub about 20 miles outside Muncie that hasn’t hosted a sitting president or vice president in 65 years—a fact noted by several warm-up speakers. To mark this historic civic occasion, the cavernous factory where the event is being held has been transformed. Idle machinery has been shoved to the perimeter to make room for risers and cameras and a gargantuan American flag, which—along with bleachers full of constituents carefully selected for their ethnic diversity and ability to stay awake during speeches about tax policy—will serve as the TV-ready backdrop for Pence’s remarks.

“It’s not a matter of when Republicans are ready to turn on Trump. It’s about when they decide they’re ready for President Pence.”

When the time comes, Pence takes the stage and greets the crowd with a booming “Hellooooo, Indiana!” He says he has “just hung up the phone” with Donald Trump and that the president asked him to “say hello.” He delivers this message with a slight chuckle that has a certain, almost subversive quality to it. Watch Pence give enough speeches, and you’ll notice that this often happens when he’s in front of a friendly crowd. He’ll be witnessing to evangelicals at a mega-church, or addressing conservative supporters at a rally, and when the moment comes for him to pass along the president’s well-wishes, the words are invariably accompanied by an amused little chuckle that prompts knowing laughter from the attendees. It’s almost as if, in that brief, barely perceptible moment, Pence is sending a message to those with ears to hear—that he recognizes the absurdity of his situation; that he knows just what sort of man he’s working for; that while things may look bad now, there is a grand purpose at work here, a plan that will manifest itself in due time. Let not your hearts be troubled, he seems to be saying. I’ve got this.

Opening of the heavens

And then, all at once, Pence is back on message. In his folksy Midwestern drawl, he recites Republican aphorisms about “job creators” and regulatory “red tape,” and heralds the many supposed triumphs of Trump’s young presidency. As he nears the end of his remarks, his happy-warrior buoyancy gives way to a more sober cadence. “We’ve come to a pivotal moment in the life of this country,” Pence soulfully intones. “It’s a good time to pray for America.” His voice rising in righteous fervor, the vice president promises an opening of the heavens. “If His people who are called by His name will humble themselves and pray,” he proclaims, “He’ll hear from heaven, and He’ll heal this land!”

It’s easy to see how Pence could put so much faith in the possibilities of divine intervention. The very fact that he is standing behind a lectern bearing the vice-presidential seal is, one could argue, a loaves-and-fishes-level miracle. …

Link to Story and 56-Minute Audio of Story

(Commoner Call cartoon by Mark L. taylor, 2017. Open source and free to use with link to www.thecommonercall.org )

The stunning release of the ‘p****’ tape in October 2016 had close advisors predicting it would lead to Donald Trump‘s downfall and running mate Mike Pence plotting a ‘coup,’ according to a new report on the vice president Tuesday.

The release of the ‘Access Hollywood’ tape where Trump boasted about using his celebrity and grabbing women ‘by the p***” rocked the campaign, and even persuaded some leading Trump advisors that the candidate was through.

Pence, the religiously conservative former Indiana governor who Trump selected as his running mate, was contemplating a ‘coup’ to replace Trump at the top of the ticket, the Atlantic reported.

With the party’s chances in doubt after the revelations, hours after the Washington Post broke news about the tape, ‘Pence made it clear to the Republican National Committee that he was ready to take Trump’s place as the party’s nominee,’ according to the report. …

When the Pences—who had two cats, a rabbit and a snake as family pets—decided to bring some of them to their residence in the Washington D.C.-based Naval Observatory last January, Trump ridiculed the arrangement to his secretary, a longtime adviser told The Atlantic in a story published Tuesday.

“He was embarrassed by it; he thought it was so low class,” the adviser said. “He thinks the Pences are yokels.”

Trump, whose net worth is $3.1 billion according to  Forbes, apparently had already formed an opinion of Pence before picking him as his running mate as “prudish, stiff, and embarrassingly poor, according to one longtime associate,”  The Atlantic said. …